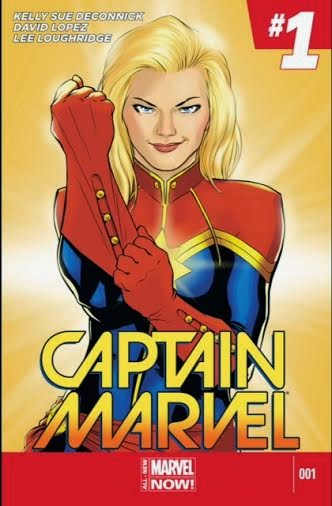 I have to hand it to Marvel, they really are committed to Carol Danvers, 'promoting' her from Ms to Captain Marvel, giving her a new series, crossing it over with an Avengers book in a bid to increase sales and, when that doesn't work, relaunching it again. 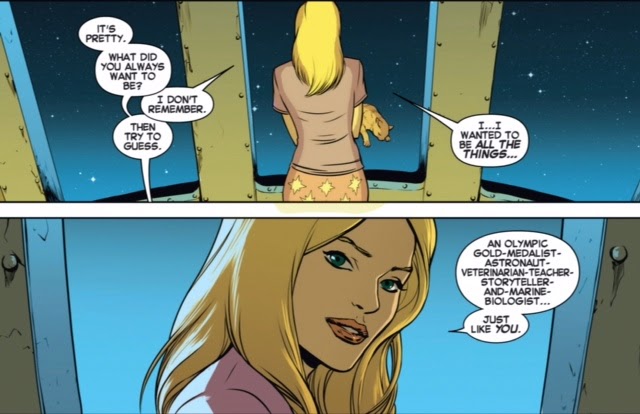 So here we have the second Captain Marvel debut issue written by Kelly Sue DeConnick in a couple of years. Custom has it that when one book fails to make it big, the next relaunch brings a fresh voice. But so far as fresh voices for Carol go, DeConnick has no peer; she's made the new Captain Marvel a believable human being - superhero, yes, but also friend, lover, student, mentor, cat owner and more. She cares, and she's cared for. For the first time since the Seventies, I feel I know who Carol is, and I'm in no hurry to see Marvel risk such a finely honed character losing her edge.

In the book itself, her edge is exactly what Carol feels she's lost. She hopes to regain it by taking up Iron Man's suggestion that she be outer space's first Avenger-in-Residence, serving with the Guardians of the Galaxy and sending back intelligence during a year-long assignment. Having recently lost touch with who she is due to the machinations of Kree enemy Yon-Rogg, she wants to find herself once more. It sounds like a cliche, but in this case it's a literal need, and space will give her the, well, space she needs.

All of which has me a little wary, given I'm not fond of space opera. I say I'm a Marvel Universe fan, but really, it's Marvel Earth I care about. The 21st-century GotG leave me cold, and the various space races - Kree, Skrull, the Shi'ar with their stupid apostrophe - have long failed to fascinate. 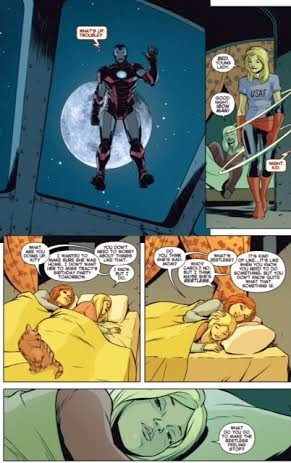 Earth is where I've enjoyed Carol most, surrounded by friends, neighbours and fellow superheroes. DeConnick serves up a massively tasty dollop of Carol's private life here as we see her flying a plane with former teacher Tracy, at Tracy's '900th' birthday party, sharing her Statue of Liberty pad with young pal Kit - aka Lt Trouble - and her mother, and enjoying a new romance with James Rhodes. 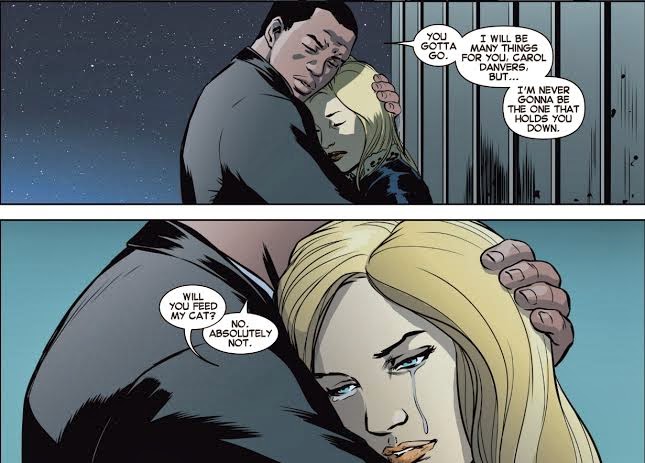 When did that happen? Possibly in some Avengers book I'm not reading - there are many. Or it may be a new thing. Whatever the case, Carol and Rhodey - onetime War Machine, now Iron Patriot - are great together and darn but I'm disappointed she's putting them aside to hang out with a stupid space critter and his mates.

Given her massively cosmic power set, it's possible Carol will pop back to Earth, but this is meant to be a 12-month assignment, so I'm not expecting much shore leave. Perhaps we'll check in on Carol's pals anyway, and see what her absence means to them.

We get a taste of Carol's extraterrestrial mission in an opening sequence, set six weeks prior to all the fun personal stuff. The set-up is pretty standard 'hero in alien market' fare, but DeConnick makes it entertaining, with Carol bringing her Earth sensibilities to a tricky situation, and potentially interesting supporting players. I'll certainly give this book a few issues, because I'm such a fan of DeConnick - and every new outing will bring Carol closer to the end of her assignment, so hurrah.

Hurrah, too, to new artist David Lopez, whose Carol is as well-defined as her personality - drawn with clean lines, she looks strong, intelligent, bright and fun. What's more, she's recognisably the Carol Danvers who's been heroing around the Marvel Universe since the days of 'Women's Lib'. Good as Jamie McKelvie's pseudo-Miraclewoman visual was, I'm glad to keep the superb costume he designed, while getting Carol's 'old face' back.

And best of all, Joe Quesada's ridiculous, ugly helmet plume hairdo looks to be gone for good.

Lee Loughridge is listed as colour artist, which makes sense, as he really does add a lot to the page - Lopez is great at body language but keeps the linework simple, requiring a sensitive colourist to add weight and texture. Lopez and Loughridge make a great team, with the settings and scenery worth solid compliments too. And production guru Joe Caramagna provides the lettering, which is attractive throughout.

The gorgeous cover shows what Lopez can do when he goes close-up - the expression really gets the measure of Carol, and I hope he handles all the lead-off illoes.

The one downer with this relaunch is that the 'Higher, Further, Faster, More' tagline is missing a word - 'pricier'. The book is a dollar more expensive than previously. We get just 21 story pages (including a delightful origin 'by Kit') and, as is Marvel's habit these days, two pages wasted on title and credits. That's not going to help this book's chances of survival.

I like the new logo - it has a familiar look, and I assumed it was an old Captain Marvel masthead, one used by Mar-Vell. Then it hit me: the 'Captain' is homaging DC's Eighties Captain Atom logo. I tell you, if Bleeding Cool gave lollipops for Swipe File entries, I'd be straight there ...