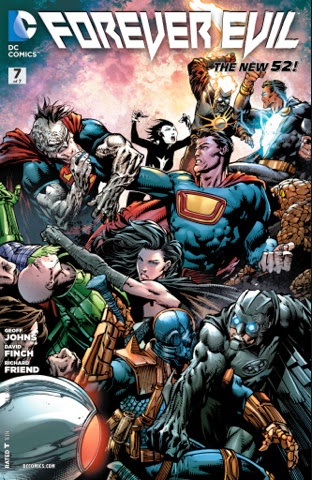 It's the last issue of DC's latest event and ... does anyone still care? Forever Evil #7 has been delayed by a few months, it wasn't that great in the first place and we've seen how the big plot points were resolved. Luthor saves the world? Check. Nightwing still alive and with a new mission? We knew that.

OK, the details of how the Crime Syndicate are defeated are diverting enough, with Luthor enacting a clever, delightfully comic booky plan to defeat the Shazam-style Alexander Luthor, but it's all ducks in a row. The regular Luthor can be the big hero  and defeat his other dimensional counterpart because writer Geoff Johns chose Alexander Luthor to be the biggest bad. The Justice League are pretty useless because Johns ignored their history of using teamwork to escape elaborate traps, and just had this be the one they can't beat.

Should I be moaning about Johns bringing on the bad guys in a book entitled Forever Evil? By all means let the villains step up and save the day, but if they're going to outshine the League, the heroes should actually be on hand to look bad by comparison, rather than conveniently incapacitated.

I could detail the ins and out of this issue's plot, but really, it's just a lot of tried and tested wheels turning. Betrayals. Deaths. Surprises. Efficient, but not awesome. The main plot beats are Luthor bringing Nightwing back from his apparent death; Alexander Luthor using his very un-Shazam, but convenient, ability to absorb powers against the Syndicate; and Batman freeing the Justice League from Firestorm's bonce in time to see the baddies be goodies. It's solid DC New 52 action - yup, someone gets squished - tailored to be made into a cartoon for grown-ups and decently pencilled by David Finch, inked by Richard Friend and coloured by Sonia Oback.

The interesting bits of the story come as things quieten down - Luthor, Catwoman, Sinestro and co get pardons; two heroes are missing in inaction; someone thought dead is alive; Ted Kord makes the scene (get a haircut, you scruff!); Batman apparently has a thing for Wonder Woman; Luthor, quite logically, works out Batman's secret identity and - stop me if you've heard this before - the story's not over!

Who could have seen this coming? The Crime Syndicate are no more, but a bigger name is on the horizon! Expect him to make his play next March, as DC celebrates a 30th anniversary. The final page reveal is the artistic highlight of the issue, but for obvious reasons I'm not posting it here.

So, an apparently more nuanced Lex Luthor is ready for his close-up. The events of this issue seem to change him, just a little, and as a fan of the Bronze Age family man Lex, I'm all for that. I can't buy him as a selfless good guy, but Luthor trying to convince himself he's the hero of the story could make for some interesting moments. Perhaps he's not forever evil after all.
Crime Syndicate Forever Evil #7 review Justice League Lex Luthor