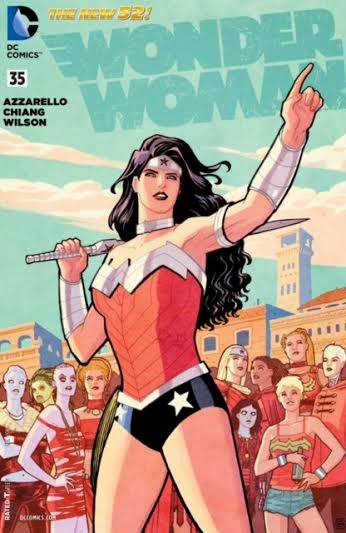 It's ages since I dropped Wonder Woman. Brian Azzarello's makeover of the Amazon legend was, to understate, not my cup of tea. But I can't resist an ending, so popped back to see how Azzarello and artistic partner Cliff Chiang wrap up their three-year story before the next creative team arrives.

In a nice bow, I'd say. Diana remains the god of war - a fundamentally wrong fit for William Moulton Marston and HG Peters' creation - but Azzarello, in a key scene, remembers something of what Wonder Woman is about: compassion and love.

I can't claim that the gory battles which take up most of the issue mean much to me; not the book's fault, obviously. Apparently Uncle Poseidon wants Olympus, and sees baby Zeke, son of Diana's mortal friend Zola, as the key. It isn't Diana, or brother Hermes, who defeat the god of the sea, but Zola herself, her body suddenly unearthly and powerful.

Then a new/old threat shows up, in the forms of the First Born - Diana's oldest, most bitter sibling - and his Chicago-cosplaying minotaur chum. 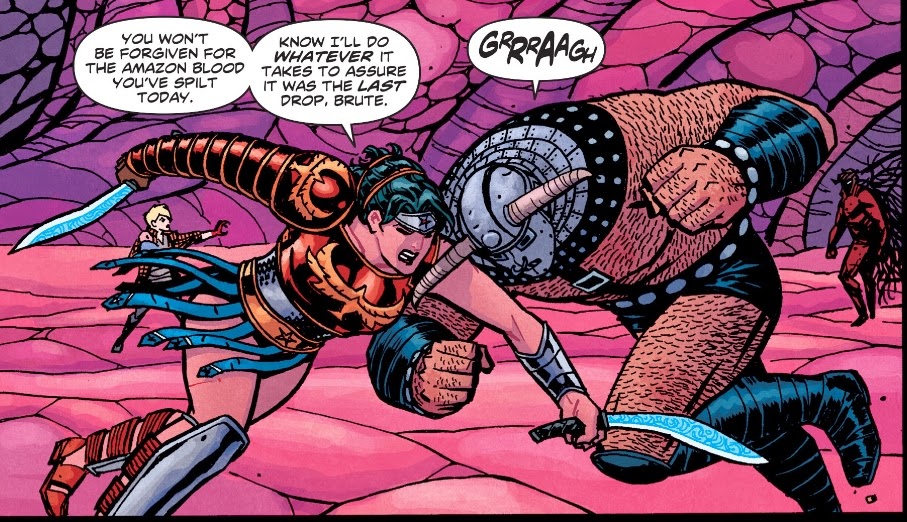 There's a fight scene I don't understand involving the First Born's entrails, or something, and minx godling Strife and a champagne bottle, or something. Chiang's art is lovely to look at, but the storytelling here should be clearer - a prodigal reader should be able to parse a scene. Anyway, the consequence is that Diana and Zola are bound, and Zeke is taken by the First Born.

A revelation involving Zeke was predicted by pretty much everyone reading this series at least three years ago, and it turns the tide of battle. This is followed by a reveal around Zola, which prompts Diana to beg one of her typically remote goddesses to embrace Love. It's a great little scene, Diana - technically now the equal of her mistress - the supplicant, humble in her petition. 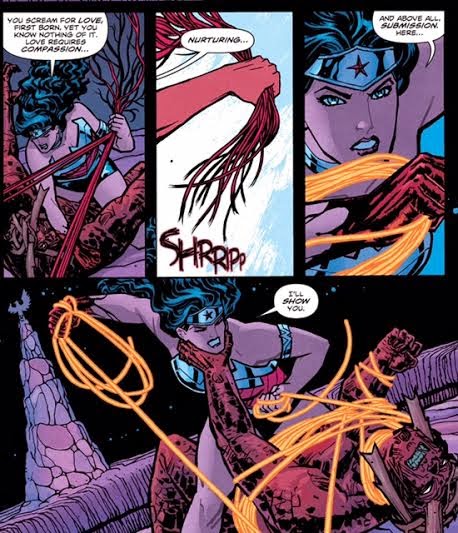 This follows a vignette in which Diana, fighting the First Born for her life, offers a lesson in submission involving her golden lasso. It's not quite the 'loving submission' of the Golden Age, but it does at least tell us that Azzarello isn't entirely unfamiliar with the source material for his epic.

The issue, and the run, ends with the war of the gods over, and a mother and child reunited. A definite win. I'm not sorry to see this Wonder Woman era end, but I'm glad Azzarello, Chiang and their collaborators - chief among them the superb colourist Matthew Wilson - got to finish their story on their own terms. And while this hasn't been 'my' Wonder Woman, every now and then there have been flashes of the character I love.

Next month, Meredith and David Finch take over the writing and artwork, and look set to give us a more traditionally superheroic Diana. I wish them, along with Azzarello and Chiang, all the luck in the world.
Brian Azzarello Cliff Chiang Matthew Wilson Wonder Woman #35 review