College students Alicia, Jody and Nancy are exercising on a beach when Wonder Woman appears and races champion runner Jody. She gives no quarter, lecturing the young women on why she's better than them, in the opening chapter drawn by Irene Koh and coloured by Wendy Broome. 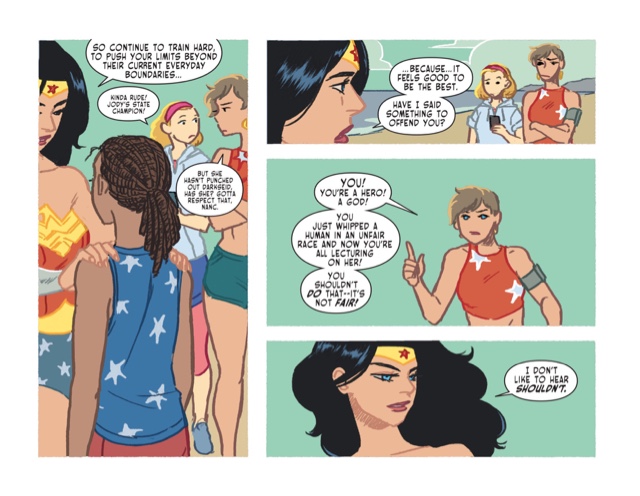 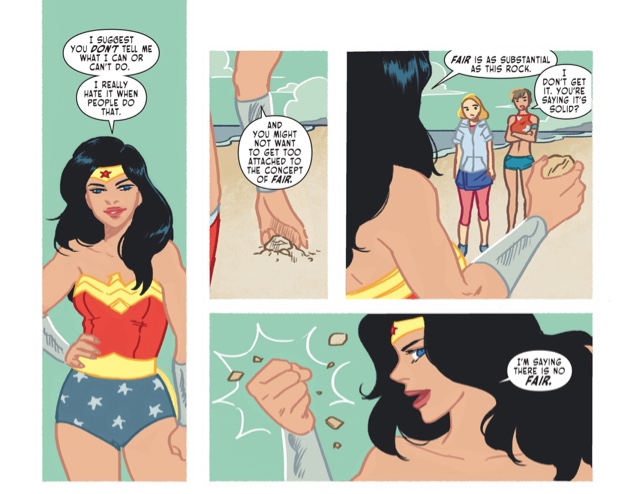 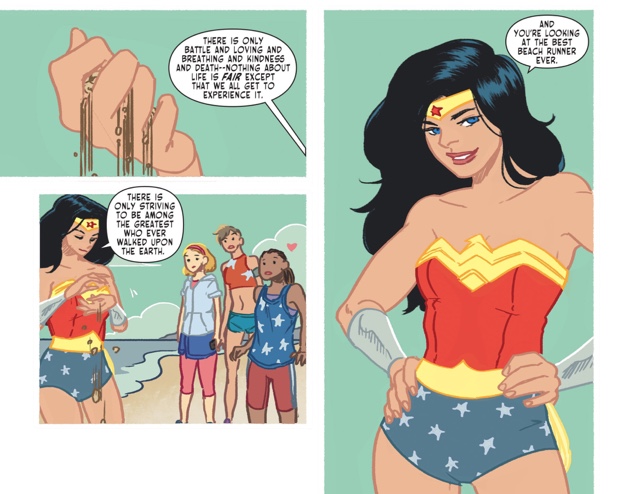 Then evil otherworldly counterpart Superwoman shows up, to show Diana that actually, she's the best. As the girls film the fight for social media, Wonder Woman takes out Superwoman brutally.
I can't remember the last time I was more disappointed in a comic; this is a terrible depiction of Wonder Woman. That it's a Sensation Comics story I've been anticipating for ages makes it all the worse - this is written by Barbara Randall Kesel, who was behind some of my favourite comic stories way back when. Batgirl. The new Hawk & Dove. Ultragirl. Strips that featured heroines who were as compassionate as they were strong - how could she not be a great fit for Wonder Woman?
Here are a few moments from the third chapter of 'Besties', with rather lovely art by Laura Braga and colourist Carrie Strachan, as Diana battles Superwoman, whom she knows is carrying a child. 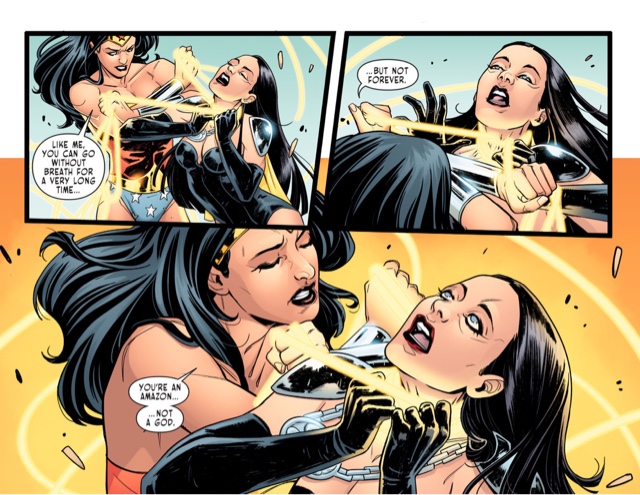 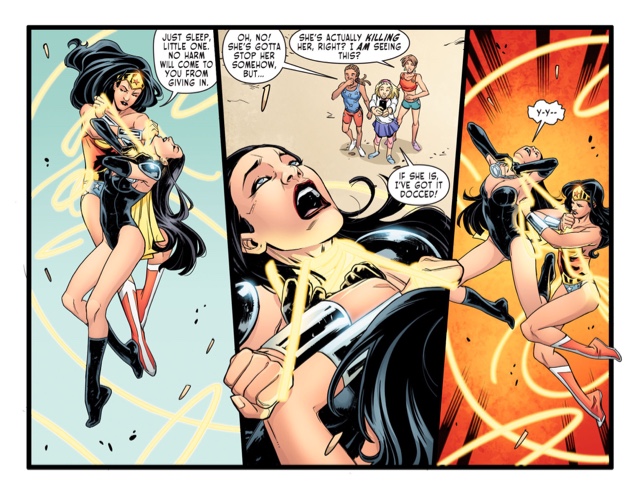 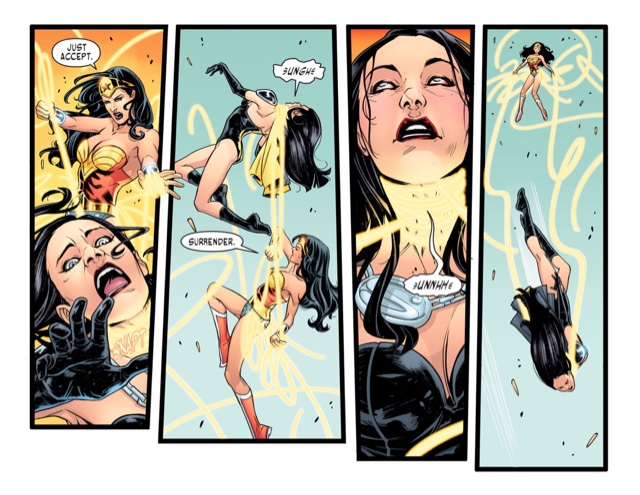 Diana doesn't give a thought for the baby's safety, or how over the top her strangling of the Earth 3 Lois Lane is. The only emotion Diana shows, apart from annoyance, is regret that she and Superwoman can't fight alongside one another.
This isn't the behaviour of a heroine, it's not the Wonder Woman of William Moulton Marston and HG Peter, or any logical evolution thereof. Sure, the last decade has emphasised Diana the warrior over Diana the peacemaker, but this isn't her using major force as a last resort, this is Diana cruelly revelling in her power to hurt Superwoman. This Diana is frightening.

It's a real shame, because Randall Kesel does give us some nice moments, tempering the conceited, arrogant Diana of chapter one with some exchanges that do speak to who Diana is. 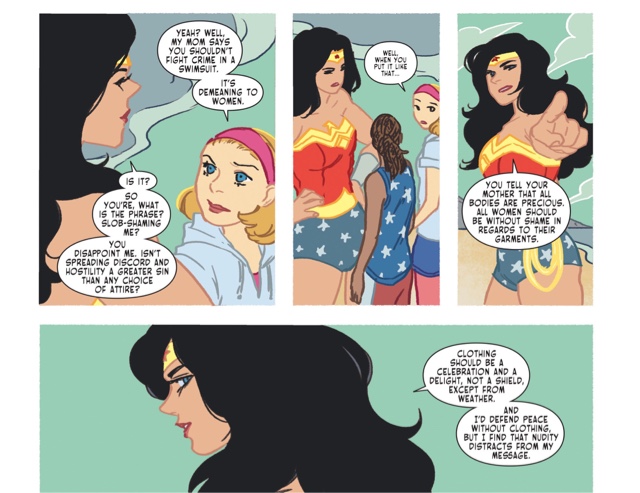 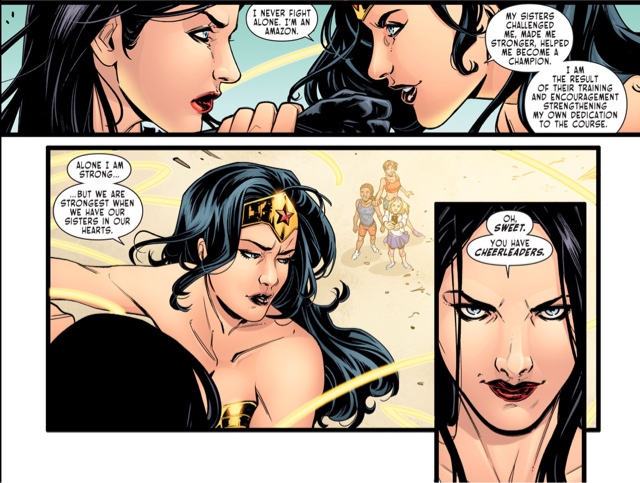 That was Koh again, then Braga, and here's chapter two artist Emma Vieceli, with colourist Kelly Fitzpatrick, depicting the best moment in the three-parter. 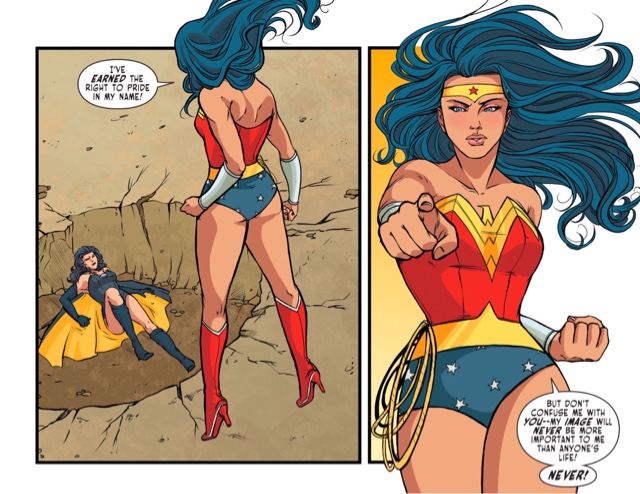 Plus, the students are nuanced in their opinions of Diana, and law student Jody gets a very nice moment along the way. These scenes don't wipe out the overall impression that this Diana is an ass, but they're something. Diana pushes messages of empowerment, but in the end, it seems she beats Superwoman not because she's the better fighter, but because the latter underestimates just how brutal Diana can be.

Am I wrong to think Sensation Comics Featuring Wonder Woman should be an all-ages book? One featuring a Diana who is a truly good person, one who beats her foes without descending to their level and then going one floor below that? 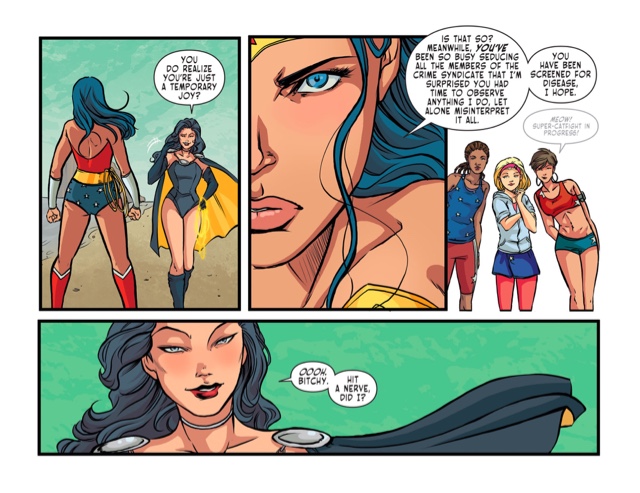 A Diana who isn't crude and catty? 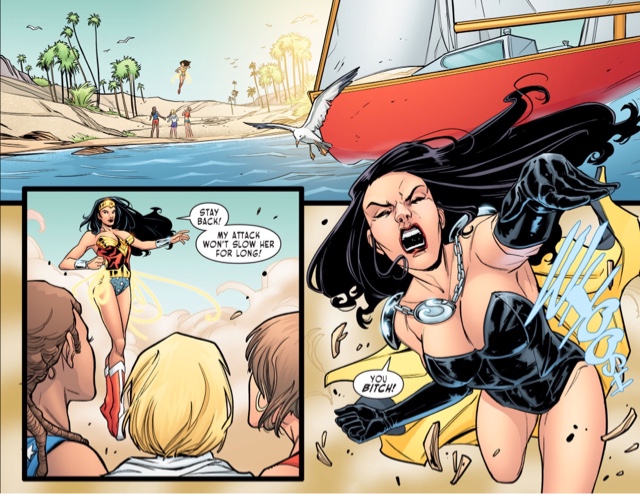 A book that doesn't open with scenes such as this, meaning a parent has to think twice about giving it to their children, who love the sweet, smart, good heroine they know from story books and old cartoons?
I remain a Barbara Randall Kesel fan, she's shown her smarts again and again. I don't know what the brief was here; perhaps she and I simply see Diana very differently. But this three-parter dismayed me hugely.
I've enjoyed a lot of Sensation Comics. Loved a few. Put up with the constant insertions of Batman mythology. Always hoped for more than the very occasional story nodding towards the first 40 years of Diana's publication history. I am optimistic because that's what superheroes taught me to be.