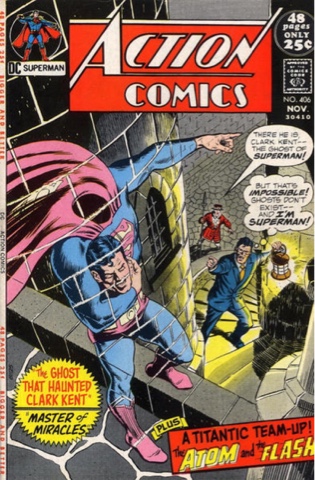 Given I'm not enjoying much of DC's current Superman output, why not look to the past?Specifically, pretty much the first Superman comic I ever bought, Action Comics #406, November 1971. Given how long it took comics to get to the UK in those days (they generally came as ballast on ships), that was likely when I bought it.
There's no way a British kid could ignore that Curt Swan and Murphy Anderson cover - Superman in the UK! And confronted by his own ghost at that. I had to have it. The fact the comic promises two more tales was a total bonus.
Before we get to the cover story, there's 'Master of Miracles', in which Clark Kent, in his brand spanking new Rolling Newsroom, is assigned by GBS boss Morgan Edge to investigate a new cult based 'out west'. 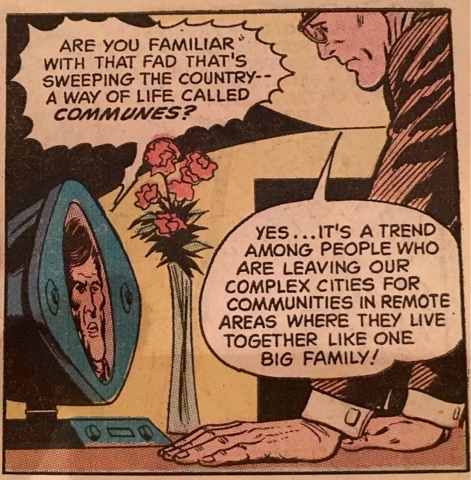 I love how editor Murray Boltinoff explains the modern world to his young readers. And look at Morgan Edge, recently introduced by Jack Kirby in his Fourth World titles, handing out assignments via a watching eye. Talk about Big Brother!
Soon Clark has driven across the wide expanse of the good old USA, and as he nears the cult compound, The Sanctuary, he takes a peek ahead with his super-vision and sees... 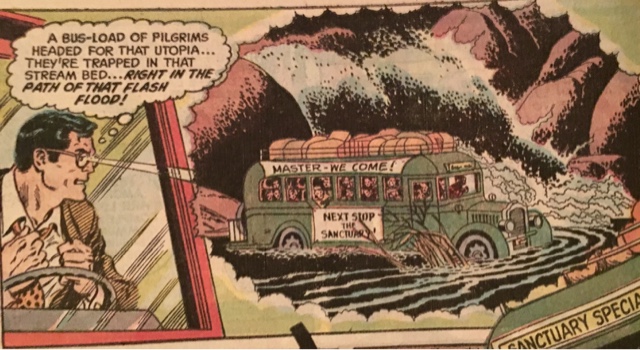 Changing to Superman, he rescues the new arrivals and then eyeballs self-proclaimed messiah The Master - and he has powers too.

Clark figures that the best way to discover more is to go native, hiding his costume in plain sight. 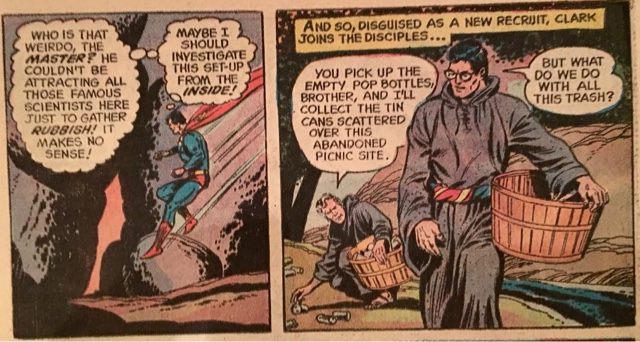 He learns that The Master's thing is turning waste into useful metals and plastics, while preaching that the end is nigh. Superman is trying to figure out his game, but is continually distracted by disasters demanding his attention. He finds time to pop into his arctic Fortress of Solitude, where he hopes his 'hyper-computer' can come up with some answers. But another diversion comes up and the Man of Steel isn't pleased.

I think we can happily file this last panel under Superdickery. I complain about the 2015 oaf going by the name Superman, but the Seventies version certainly had his off moments. I mean, there's a mystery many with super-powers who knows Superman is Clark Kent and we learn that suddenly Kandor can't count its citizens. Even as a seven-year-old I could see where this was going. It's entirely possible that was the intent of writer Leo Dorfman, flattering his readers that they're smarter than Superman.
Anyway, to make a short story shorter, The Master is a Kandorian enlarged on Earth, who wants to be a Superman with his very own band of worshippers. He plans to take his cultists off to live on another world - he's been transforming waste into spaceship materials with his powers. He does genuinely believe Earth is doomed because this is the early Seventies and, like, pollution. Superman isn't at all sure he's wrong. 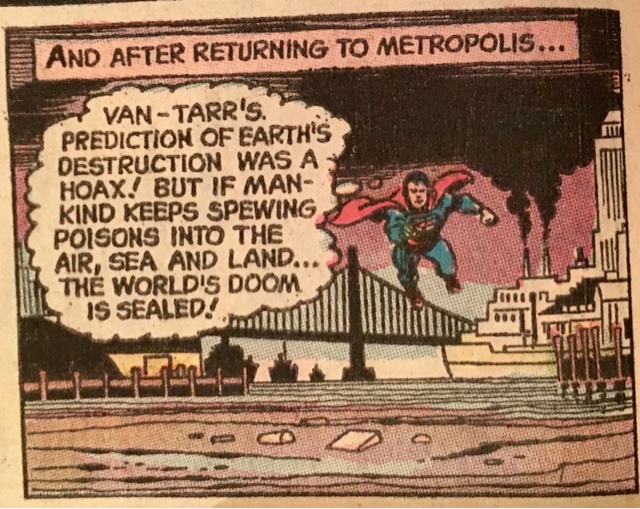 Think on that kids...
The story ends with a bit of subplottery. 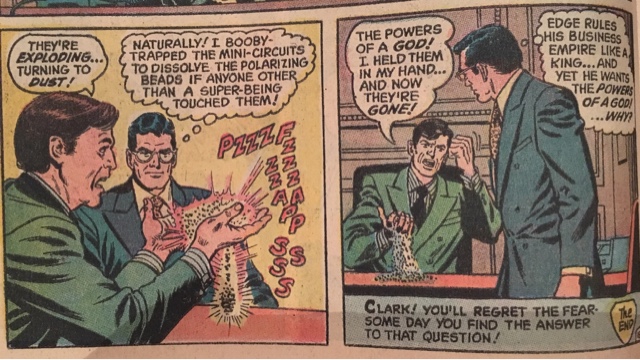 I don't recall whether I was on tenterhooks to learn what Edge's bag was. Modern me is surprised we weren't directed to Kirby's Jimmy Olsen mag, where we'd learn more about Clark's mysterious new boss.
I loved reading this story again, it took me right back to the times, when Superman's world was changing from the whimsy of the Silver Age to the Relevance concerns of the early Bronze Age. Dorfman's script is melodramatic fun, while the 'Swanderson' art is just lovely - clear and expressive. 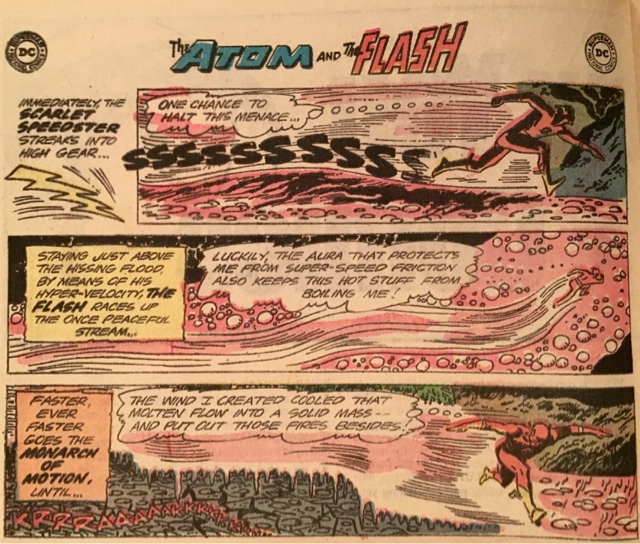 The art on the next strip, I remember, was less to my taste. Then, I didn't know Alex Toth was a comics great, all I saw was scratchy art on a bonkers Atom and Flash team-up reprinted from an elderly Brave & Bold. Now, I know; I'm still not keen on the art here, though - the panels of Barry and Ray in civvies are great, but the storytelling in the action scenes comes up short. 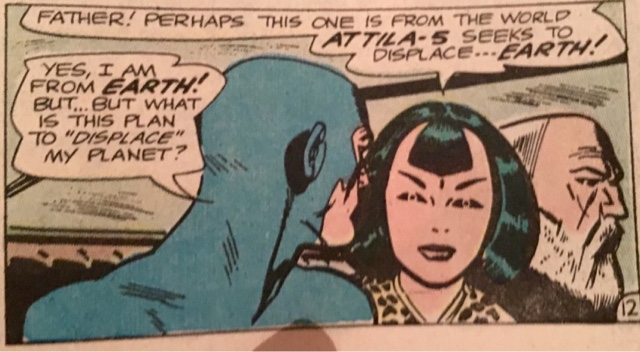 'Bonkers' will likely have cued you into the fact that writer-wise, we're talking zany Bob Haney - giant statues battling for no reason that makes sense even in a superhero story; massive plant tentacles grabbing a bridge, that sort of thing. It's all rather wonderful, but we don't get the whole story in this 48-pages-for-25-cents issue - happily, I did get the next issue, so saw how our heroes beat the 'Challenge of the Expanding World'. I don't think I liked the art any better then, though.
Finally we come to the main event, which happens to be the shortest story in the issue.  It's as mad as Haney's tale, but somehow Geoff Browne - that's actually Dorfman again - sells it better; it seems more like a story he's heard than something being made up on the fly. But yeah, it's weird stuff. Clark Kent is making a documentary on London - an awful long way to drive that newsvan - when a Superman-lookalike spook appears at the Tower (this isn't a comic you could accuse of having a misrepresentative cover image). This leads to a classic milksop moment. 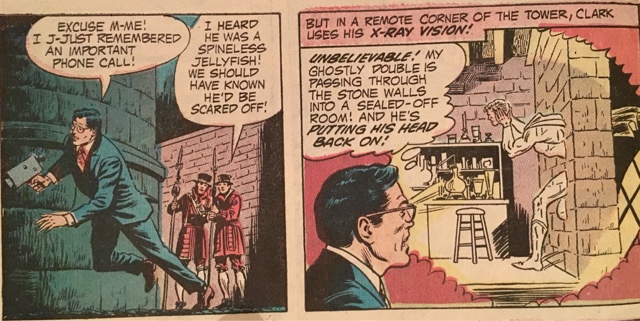 Soon, he meets the ghost, and wouldn't you know it, like The Master, he knows Clark's secret ID! Is it another pesky Kandorian? No, it's former Royal Physician Dr Troy Magnus, still around three centuries after he should have died. 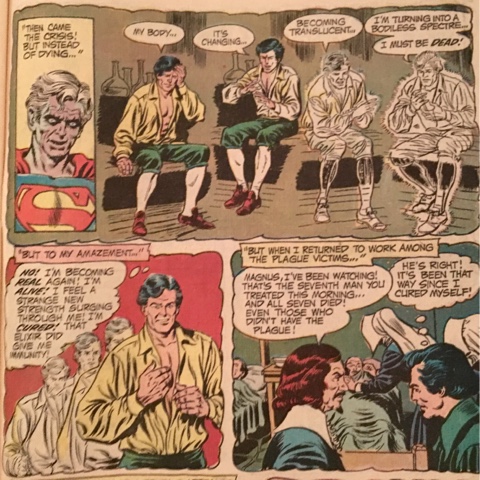 There follows a sad tale of how one man's attempts to do good damns him - he's able to turn into a phantom and change his appearance, but is basically condemned to a lonely existence as a living mummy. He wants just one favour from Superman. 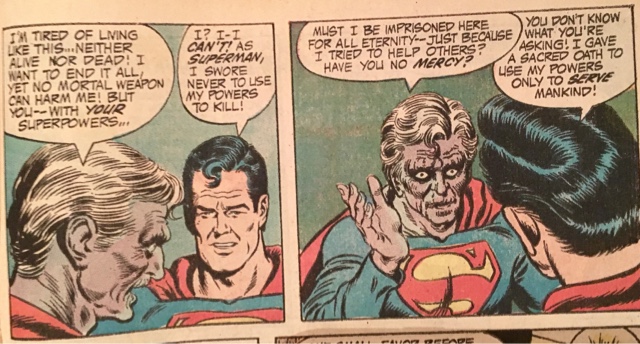 Of course, Superman can't end someone's life, even at their own request. Nothing for it but a convenient accident, before the story ends on an irrelevant bit of supposed irony.

Oh, how the Superman books liked their irony.
Still, it's a haunting little tale, nicely offbeat and a great opportunity for Swan and Anderson to escape contemporary America. And just look at poor Troy - I've never forgotten this man, more than 40 years on. Kudos to the unnamed colourist for their contribution.
For sheer variety, these quarter comics couldn't be beaten, and the entertainment level was usually pretty high. I won't be giving up buying new books, but boy, who says you can't go home again?
Atom Curt Swan DC Comics Flash Geoff Browne Leo Dorfman Murphy Anderson RETRO REVIEW - Action Comics #406 Superman