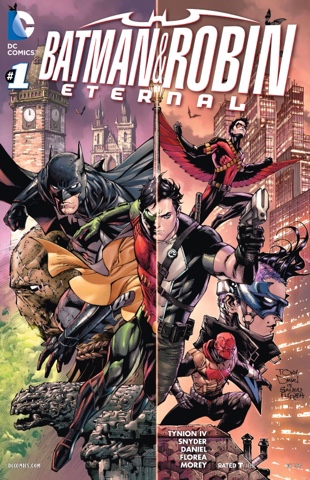 Too many sidekicks. That's one of the problems with the current Batman mythos. The contracted continuity post-Flashpoint means that in just over five years Batman has brought Dick Grayson, Jason Todd and Tim Drake into the hero business. Damian Wayne showed up and claimed the Robin legacy. Barbara Gordon joined the fray as Batgirl, Stephanie Brown arrived as Spoiler, Harper Row became Bluebird and in this first issue of a weekly series, Cassandra Cain announces herself.
Were I in charge of DC, I'd be sidelining a few members of this mob, but the debut issue of Batman and Robin Eternal, written by James Tynion IV and Scott Snyder, seems determined to make a virtue of it. The first chapter of the six-month run sees Dick Grayson, back in Gotham on business for spy agency Spyral, teamed up with Red Hood and Red Robin, attacked by a gang of kids on a school trip, betrayed by a colleague and bemused by talk of 'The Orphan' and 'Mother'. A subplot sees electricity-obsessed wannabe sidekick Harper Row bamboozle Robo-Batman Jim Gordon, and worry brother Cullen with her evening antics; a flashback shows us how one of Dick's early cases as Robin involved the Scarecrow; and a surprise shocking reveal at the end is so surprising and shocking that there's not a single reader who will give it credence for one second. Given it's the big hook meant to net us for next week's instalment - if not sign up for the whole series - that's a massive problem. If we're to buy the possibility of an Everything You Thought You Knew About Batman Was Wrong, it shouldn't be one so big that, if true, it would destroy the character.
It has to be that someone is framing Batman. Or Batman is hoaxing Dick. It's comics, these things happen. What doesn't work is the presentation of the cliffhanger - a Batman hologram witters on mysteriously and ominously to Dick about 'Mother' without giving any clear information on who Mother might be or what she wants. How is that supposed to help him? Talk about keeping mum... It comes across as drama for the sake of drama, rather than an organic moment in the story.
I also can't believe Dick would willingly share details of his early exploits with Spyral person Poppy, and let her eavesdrop on a sortie with his brother Robins - isn't his undercover mission all about protecting superhero information, not volunteering it?
I do like the fun facts about Red Robin Tim, namely his age - 16 - and IQ - 148. Perhaps next time we'll learn where natural gingernut Jason buys his black hair dye. 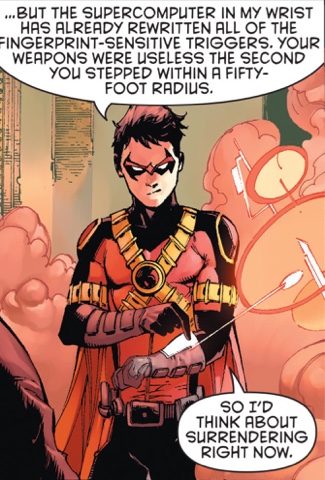 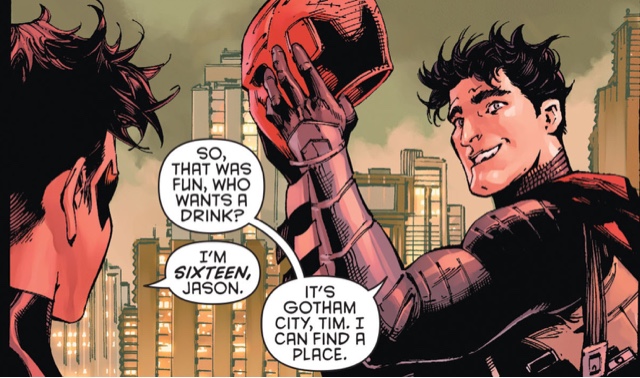 Scripter Tynion does a good job of capturing the first three Robins' current personalities - grim Tim, cocky Jason and focused yet flighty Dick. This does, though, remind us of what's missing from today's DC Universe - the 'laughing young daredevil' created to contrast with Batman, to give readers a way into the stories, a point of identification. Today we have a clutch of Robins - including the entertainingly mean Damian - but not one classic Robin, punster and acrobat par excellence. 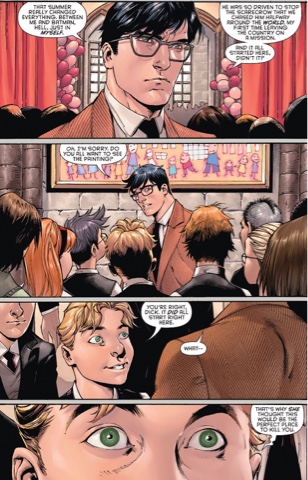 Penciller Tony Daniel and inker Sandu Florea's art serves the story well, with dynamism aplenty as scenes straddle various times and places. His undercover Dick - think tweed - is a treat, while the gaggle of Stepford Kids are suitably spooky. 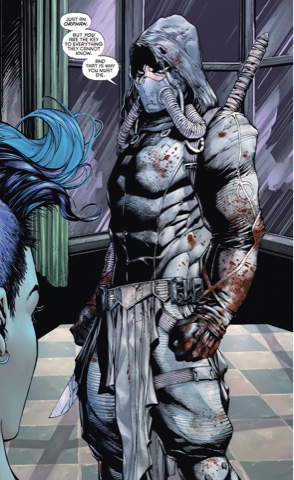 And a character introduced as 'an Orphan' is undoubtedly ludicrous, but has menacing presence. There's good colouring from Tomeu Morey and lettering from Tom Napolitano.
I see what the cover is attempting but despite the efforts of Daniel, Florea and Morey, it doesn't work, the central Dick split being off, and the whole thing a tad too busy. I adore the Mikel Janín variant, though. 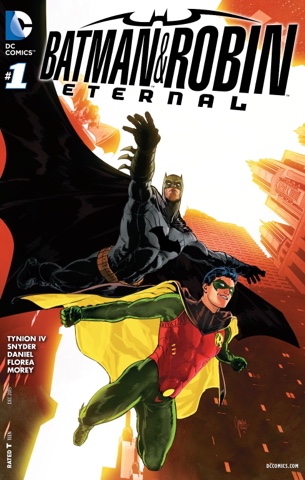 With 36 issues due, there's a lot of room for this story to twist, turn and grow, so I'll give it another few issues to grab me, but if the idea of Batman as monster presented this week isn't quickly dismissed, I may not be be around for long.
Batman and Robin Eternal #1 review Dick Grayson James Tynion IV Mikel Janín Red Hood Red Robin Sandu Florea Scott Snyder Tom Napolitano Tomeu Morey Tony S Daniel