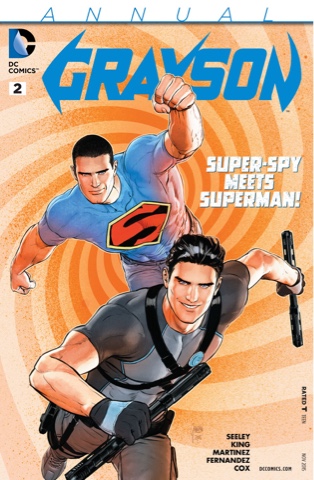 Several years ago, Batman and Robin are trying to stem a rampage by the hulking Blockbuster. The creature is nigh unstoppable but they have a secret weapon - Superman.
Today, original Robin Dick Grayson is preparing to leave Gotham after a failed attempt to quit dodgy espionage organisation Spyral. He's decided to have 'one last dance' through the city streets before resuming his undercover mission with the international organisation. What could be more fun that leaping off a building without a net? 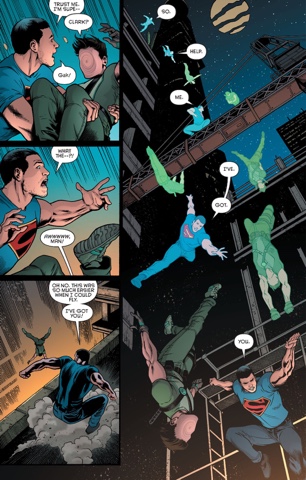 And who should be passing through Gotham but the newly outed, somewhat underpowered Superman , presumably on his way to, or from, the current story in Batman/Superman. He sees a man leaping from a tall building, assumes suicide and 'saves' the jumper. Spyral's Hypnos eye implants prevent Clark from recognising Dick, but he knows the Man of Steel, bringing us this heartwarming moment. 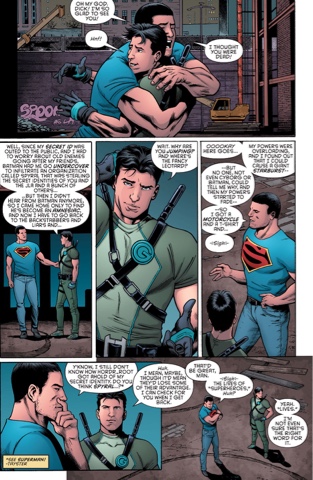 And I laughed out loud at Dick's entirely straight, but undoubtedly ludicrous, summary of his recent life.
The reunion is interrupted by members of gamer assassin cult The Fist of Cain, who have learnt the alien Superman is in town and want to win points by bringing him down. Dick decides to kibosh their focus by pointing out that, hey, as an agent of Spyral, he's a great target, too.
Teamwork allows our heroes to hold their own against the gang members, though things begin looking black when it becomes clear they have access to some kind of super-power juice. And then the source is revealed. 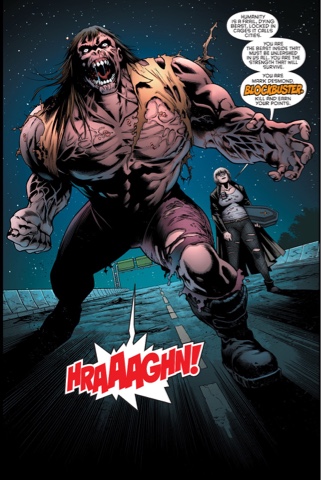 Yep, it seems that flashback Blockbuster was Chekhov's gun, ready to be aimed at Clark and Dick. Superman's suggestion as to how to win the day doesn't go down well with his younger friend...
But this issue went down incredibly well wth me. The camaraderie between Dick and Clark is rather wonderful, after months of a Superman who can't seem to get on with anybody. It's illuminating to watch the new Superman be reminded that you don't need metahuman abilities to take on the worst the world has to offer. Superman feels like a shadow of what he was, but Dick has never had powers - he's just a guy with guts and training and he does just fine.
Tim Seeley - scripting from his plot with Tom King - really convinces us that these men have known one another for years, linked by Batman and their inherent optimism. Superman points out that while Dick has gone deep behind the Spyral veil, he's not gone native, and it's obvious that Dick's disposition is infecting Superman. The bitter stranger of the Superman series is absent, replaced by a character more recognisable as comics' greatest hero. Sure, his speech patterns are still off in terms of who Superman is, but they're bang on in terms of how DC currently wishes to present its premier character. I can deal with the tough guy dialogue, though, when it actually feels like we're with Superman.
Every page of this annual has something to make me smile, with this sequence bringing an especially broad grin. 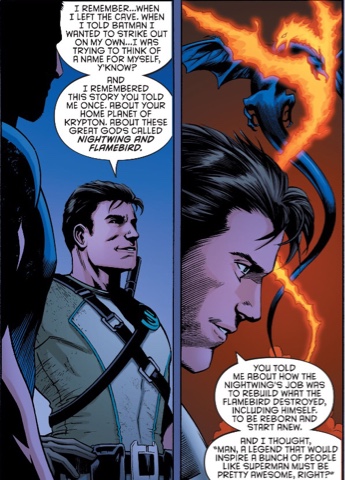 It may not give us back the pre-Crisis adventures of Flamebird and Nightwing - Superman and Jimmy Olsen as the Batman and Robin of Kandor - but it does reinstate the direct link between the Nightwing name and Superman. Dick wanted to be part of Superman's legacy along with Batman, and in telling Superman this, perhaps the Man of Steel will reconsider his recent decision to reject the brightness of his soul.

If not, well, at least we can be amused at what Superman calls his latest motorbike - it's all a bit Benny Hill, but there you go.
Other nice aspects include Dick's distracting good looks, Perry White's 'emerging supernuts database' and the return to continuity of original Blockbuster Mark Desmond. The only off note is Superman's evaluation of Batman's intellect, putting him above Lex Luthor. Isn't Batman enough of the magic man without him outshining the biggest criminal brain on Earth?
Speaking of Luthor, he has a cameo here that, even more than his recent appearance in the regular Grayson book, has me itching to see Seeley and King spotlight him in a Superman story. Especially now we know they have a good handle on the Metropolis Marvel.
Regular artist Mikel Janín is around only for the terrifically breezy cover, but penciller Alvaro Martinez and inker Raul Fernandez do a bang-up job of matching his tone - the work is sharp, sexy and their Dick is right on model. The acrobatic sequences are smooth as silk, Blockbuster is suitably scary, while the quieter moments fair pulse with dynamic tension. Should Janín move on from the series, Martinez and Fernandez could easily step into the breach, with regular colourist Jeromy Cox and letterer Carlos M Mangual hanging around to add extra levels of consistency.
If you're already a fan of Grayson, you'll need no convincing to buy this book. If you're a fan of Superman but not thrilled with recent portrayals, this could be just the tonic.
Alvaro Martinez Carlos M Mangual Grayson Annual #2 review Jeremy Cox Mikel Janín Raul Fernandez Superman Tim Seeley Tom King