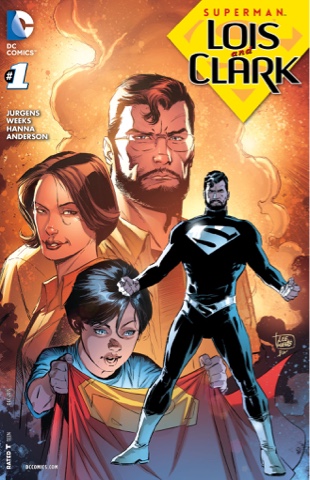 Lois, Clark and Jonathan are no ordinary family - mom and dad are refugees from another reality, while Junior is heir to an amazing heroic legacy ... not that he knows it yet. For Lois and Clark haven't told their young son that she was a Pulitzer Prize-winning journalist and he the greatest superhero on the planet. They're living on the downlow, maintaining a front as farmers while she writes best-selling crime and political exposés and he does great deeds in secret.
One day, they'll tell Jonathan where he comes from, but for now they're the Whites, living a quiet life in a small Californian town. And they're happy. They're still unsettled by the harsher world they've found themselves in, but they've made peace with it. 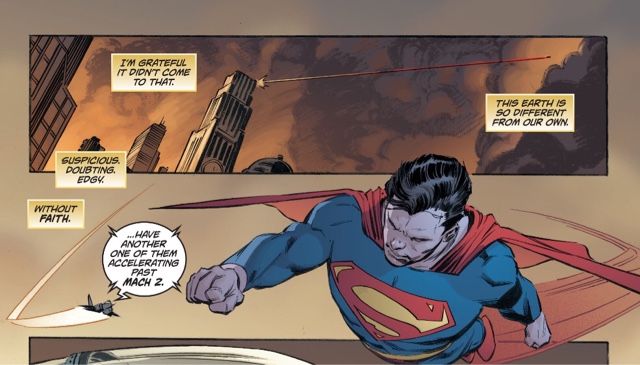 Avoiding the temptation to go public as a superhero and risk his family being hounded, Superman wears black when he's saving people from disasters, or trying to avoid people who became villains on his home Earth emerging as such here. And after getting Jon off to school, Lois heads for the big city to give her editor her latest manuscript, a teardown of Intergang. Exposure could get her - and worse, her precious boy - murdered. She's already being watched...
A surprise spin-off from this year's Convergence event, Superman: Lois and Clark - which I dearly wish was called Mr and Mrs Superman - proves a real treat. Writer Dan Jurgens  created dozens of memorable Superman stories in the Nineties, and he brings his familiarity with the character to bear here with great results. Superman asks the same questions a lot of us pre-Flashpoint old timers have been scratching our heads over: why are the heroes so young? Why isn't Cyborg with the Titans? Why is this world so harsh towards its heroes?
It's a wee bit of a stretch to believe keeping his privacy was more important than helping the New 52 Justice League as they first fought Darkseid, but Jurgens just about sells the conceit in a grabby opening flashback. After years living on this new world this Superman seems more melancholy, but he's recognisably the guy we followed from 1986 to 2011. And Lois hasn't changed a bit, she's still the funny, sparky hack of old. As for new boy Jon, he's a firecracker, not yet manifesting powers but certainly showing his mother's curiousity when it comes to ferreting out the truth behind his father's rubbish excuses when he slips off to be super. 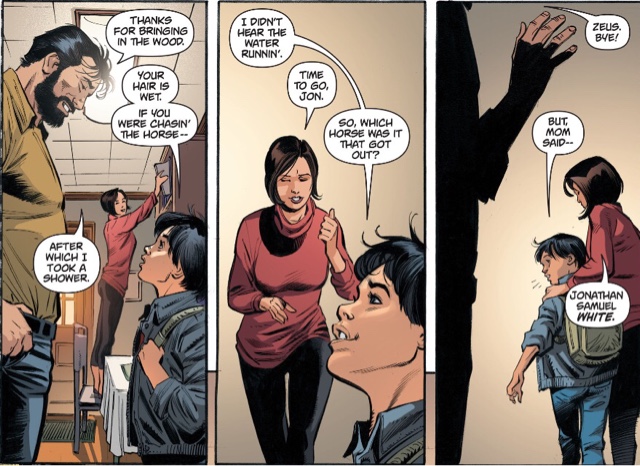 I love that his name honours her father, his father and the man who was their father figure at work.
As we're a bit old school, even as he has Superman try to stop this world's Hank Henshaw becoming the Cyborg Superman, Jurgens gives us an actual subplot, cutting away to intrigue on a distant world. He also does some plot seeding by revealing that the pre-Crisis Supergirl, Flash and post-Crisis Green Lantern - the first two having survived the Anti-Monitor and the latter a redeemed Parallax, all thanks to Convergence shenanigans - have gone off exploring the Multiverse. And giving both leads a turn at narrating is an efficient way to recap while getting us into their heads.
Exciting as the superhero action is, I'm equally thrilled by the little touches of normalcy - the Kent values being instilled in Jon. Pet dog Ranger's drinking habits. The huge affection of Lois and Clark and Jon's very true reaction.

Lee Weeks matches his art to Jurgens' script with huge skill and style, giving us a Lois and Clark immediately recognisable as the pair who sparked off one another for decades. He's as adept at the rural scenes as the big city moments, while the alien cutaway promises great things. The compositions always impress, while the figure and face work bring extra value to Jurgens' words. And the big flashback scenes make the main Convergence book look far better than it was to read. I wish Superman were clean-shaven and in the classic costume - you know, the actual Superman costume - but I suppose a different look is essential from DC's point of view. The beard and black outfit with silver chest emblem are, at least, a nice callback to the Death of Superman story, arguably Jurgens' finest moment.
Ever-sharp inker Scott Hanna finishes Weeks in fine style, while Brad Anderson seems to be having a ball colouring the farm scenes. Letterers Joshua Cozine and Troy Peteri are new names to me, but they immediately gain nerd points with a title font homaging the classic Art Deco Action Comics logo.

I love this issue, the first of 12. I wish the series were ongoing. I wish it were weekly. I want an annual and spin-offs. If you've been missing the Clark and Lois we knew for decades, here they are. And they're moving forward, determined to make a better world for their son. Join them, and perhaps they'll stay with us awhile. 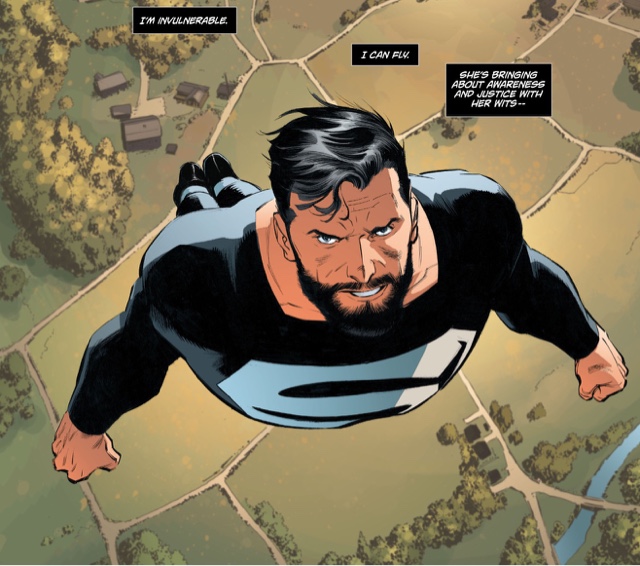