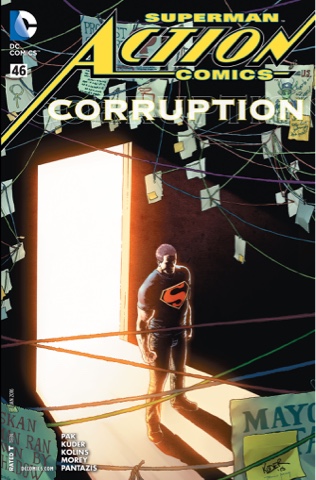 It's Superman versus shadow ninjas. Again. How many times have we seen this now in the neverending storyline running through the Superman books? He's still short-haired, still missing most of his powers, still trying to work out what the master plan of dark witch Wrath is.

As we join him this month, Superman, at Wrath's secret research hub, has been infected by the darkness that turns ordinary people into shadow demons. He likes it, but he's not succumbing to it. He uses the energy boost which the sheer anger gives him to stop Wrath's army of drones and rescue the ordinary people on whom she's been experimenting. He sends a call out to pals Lana Lang and Steel to look after the people, search for a cure, while he goes looking for Wrath. He realises that he can tune into her location, and travel through  a shadow dimension to instantly reach her, well, other secret hub. 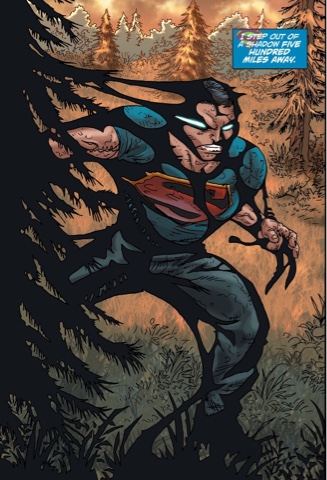 There, she's been preparing a super-weapon to infect millions with the black mass, supposedly making some people stronger, purifying them, while the weaker become mindless drones. Superman confronts Wrath but before he can reach her - she does a nice line in teleporting from pose to pose, twirling her metaphorical moustache - she sics her latest recruit on him ... Frankenstein, Agent of S.H.A.D.E.

Also on hand is Metropolis firefighter Lee, who was infected prior to Superman, and has proven able to resist the pull of her darker urges. Wrath is impressed, and hopes she and Superman will join her new world order.

It's not very subtle is it? And if you don't get it from the words on the page, the art gives you the nod. 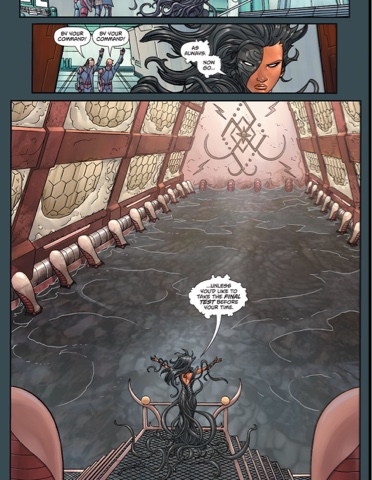 SS lightning bolts? Check? Sieg heil? Yup. Modified swastika? Present. Yup, Wrath is either a neo-Nazi or a story surrogate for same. Is she a new version of Dark Angel from the old Wonder Woman comics? Does the instant travel say Nightshade Dimension? Or is it just that this whole sub-storyline currently, well, infecting Action Comics is simply a lot of vamping filled with derivative elements and occasional fun flourishes, such as Frankenstein?

I don't know, but I can sum things up with: blooming heck, it's going on a bit. If we ever knew, I've lost track of where this fits in with the current Batman/Superman story, which has immortal villain Vandal Savage secreting an unambiguous Nazi spaceship-thingie under the Siberian ice. Or the Superman/Wonder Woman book, in which ... heck, I can barely remember. It would be useful to know, to be able to plot a mental throughline.

As it is, we're left with another well-crafted - Greg Pak and Aaron Kuder write, Scott Kolins draws, Pete Pantazis and Tomeu Morey colour, Steve Wands letters - superhero comic that has me reaching for the metaphorical comedy crook. I want to hook all these elements and drag 'em offstage so something else can take their place. Unrestrained by the current DC-driven direction, Pak, Kuder and co could be giving us wildly fun stories starring a more traditional Man of Steel. 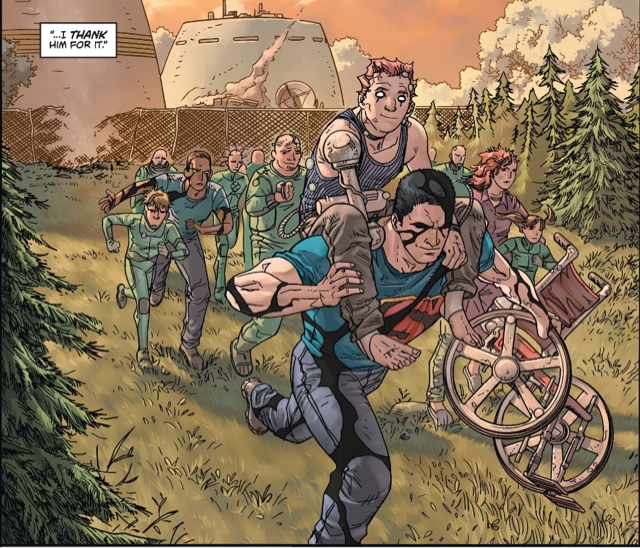 There are flashes of goodness here, such as Superman carrying a kid on his shoulders, Superman pulling a Batman/Gordon exit on Lee, Superman asking friends for a hand; it feels like Pak and Kuder are trying to subvert the direction, where they can. But wouldn't it be great to see them told: here's Superman, create something new?

Instead we have another scene of Superman admitting he likes touching the darker side, and a moment in which he says the darkness is helping him find himself - that's ambiguous, it's way past time we had an outright assertion that he's remembering the hero he's meant to be. 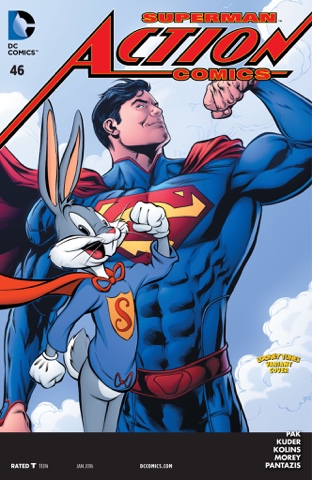 You know what I liked best about this issue? The Looney Tunes variant cover that dropped with the digital version. The New 52 costume I could do without, but just look at the fun here from Neil Edwards and Spike Brandt - a smiling Superman in an intriguing encounter? I had to look back to see what the regular cover is - it's decent work from Kuder and Morey, but so terribly generic so far as this story goes.

I'm sticking with this book because I know how good Pak and Kuder are, and I'm a Kolins fan - he's a fine storyteller and gives us some memorable images here -  hoping that one month soon the good elements of the script will outweigh the bad. I'm buying because I'm rooting for Superman to emerge from the grunting 'Superman' we've been stuck with for months and months, the Superman whom solicitations tell us will be hanging around until at least February. The 50th issues of DC's original New 52 titles are coming up after that - I can think of a great way to mark the occasion.
Aaron Kuder Action Comics #46 review Greg Pak Neil Edwards Pete Pantazis Scott Kolins Spike Brandt Steve Wands Tomeu Morey