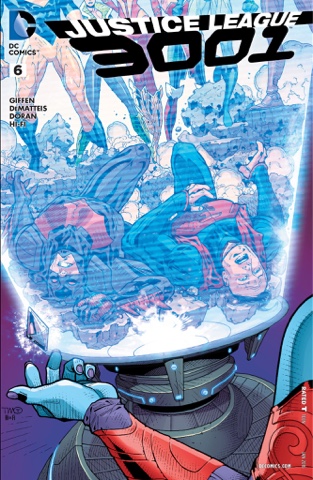 Having brought a Batman pretender before the sheriff of prison planet Takron-Galtos, the 31st-century's genuine Caped Crusader wants to make her his ward... well, Tina Sung is an orphan, and you know how Batmen are when they sniff a possible sidekick. Particularly unimpressed with the idea is Supergirl; the original Kara Zor-El isn't one for snotty, smart-mouthed kids. 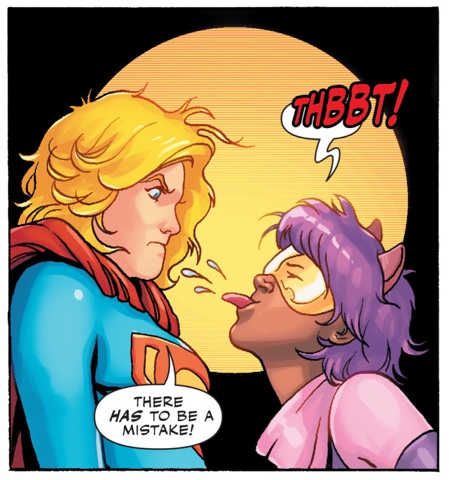 Unhappier still is the local Harley Quinn, aka Tina's best pal, Harriet Shankar. So she's well up for a fight when a pair of chatty androids turn up wanting to kill Batman - and anyone who stands by his side. By the end of the issue we've seen Supergirl really cut loose for perhaps the first time since she joined the future Justice League...
... and tragedy.
JL3001 #6 is a change of pace chapter. It's less subplot heavy than most instalments, but every bit as entertaining. The emphasis on action is a chance for guest artist Colleen Doran - working from plotter Keith Giffen's breakdowns - to show her facility with a fight. She also has a Kevin Maguire-like knack for facial expressions, though Doran's been doing it longer. 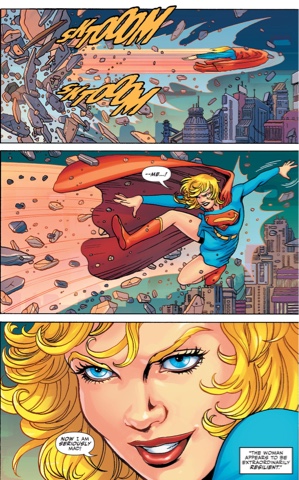 There's a gorgeous cleanliness to the book, a breeziness that really suits the Silver Age Supergirl, even when she's more than mildly irritated. The androids sent by the Lord of All Beings and Things, especially, benefit from Doran unleashing her inner Kirby - check out the issue for a breathtaking splash featuring them - while always exuberant colour house Hifi keep the tone consistent with previous issues. 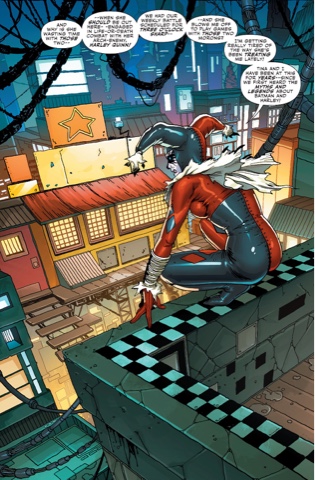 It may seem an odd thing to point out, but the balcony Harley's crouching on, with its realistic tiles and go-go checks brickwork, is a delight. Giffen, Doran and HiFi really care about their craft. On the lettering front, Marilyn Patrizio is an unfamiliar name, but her bold, sharp work fits right in. 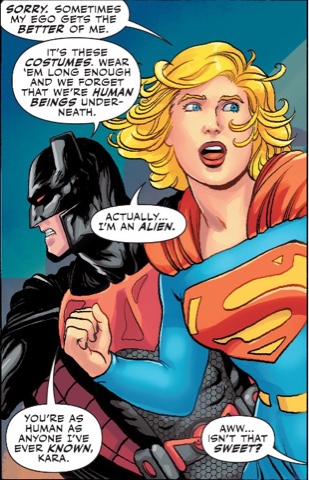 Scripter JM DeMatteis juggles the book's tone, moving from broad comedy to tragedy with a veteran's assuredness. His dialogue sparkles, whether it's bad-tempered banter or battlefield bravado. While Supergirl gets the big, showy moments - and I seriously love them - DeMatteis deepens Batman's character, emphasising his compassion and wisdom. This is a Batman based on DC's Bronze Age version, a sane Caped Crusader, not a hero as nutty as the people he fights.
Timothy Green's cover could have done without the foreground figure, allowing the JL members standing over Batman and Superman to be less hampered by the logo. And if we had no viewer, there'd be no motivation for HiFi's delicate colouring that represents holovision or whatever.
It's a minor quibble, but I want this comic to grab casual buyers by the eyeballs, persuade them to try this book. It's old school, it's new wave, it's just a joy from beginning to end.
Colleen Doran HiFi JM DeMatteis Justice League 3001 #6 review Keith Giffen Marilyn Patrizio Timothy Green II