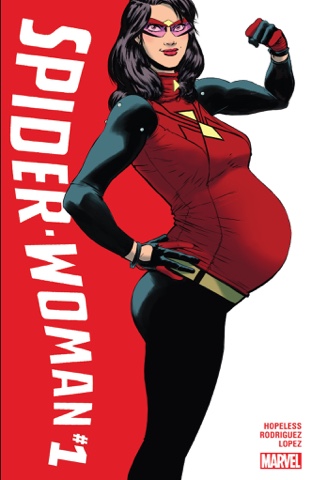 When this series relaunched with #5 a few months ago - yes, I see the #1 on the front, but this is Marvel - I appreciated the craft, but the hipster Marvelousness of it all meant it wasn't for me. I like my Spiderwoman creepy, something she hasn't been since about 1980.
Still, I'm always tempted by a gimmick, and here's Jessica Drew heavily pregnant. The book has jumped forward eight months due to Marvel's Secret Wars business, and Jess has stepped back from superheroing. She's mentoring the reformed Porcupine as he takes his first steps on the right side of the law, while reporter pal Ben Urich reminds her not to interfere. She doesn't really need the advice; she knows she has to be sensible for awhile, safeguard her unborn child.
Flashbacks show us how Jessica's been doing the last few months, but they don't tell us who the father is. Likewise, we don't find out as a maternity leave party is thrown for Jess by chum Carol Danvers, aka Captain Marvel - Iron Man, for one, is beside himself with curiosity. 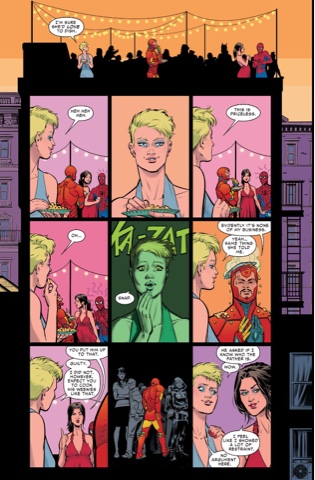 And can you blame him? When Captain - then Ms - Marvel got pregnant, no one knew who the father was, and it turned out to be space rapist Immortus via a literal phantom pregnancy. Writer Dennis Hopeless doesn't bring that up here, which is sensible on the one hand - why bog a book down with someone else's continuity?  On the other, well, there's no way the subject wouldn't come up. While I can go with Hopeless just moving on, the detail that Carol wants to be godmother to Jessica's child is pretty unbelievable.
I do wish we'd found out who's the daddy; the question is more interesting than anything that happens in this book. Much as I enjoy a bit of superhero socialising, as much fun as penciller/colourist Javier Rodrigues and inker Alvaro Lopez's alien hospital scene is, Spiderwoman #1 is so ridiculously relaxed that there's no excitement. There's neither physical nor emotional tension. It's as if the issue has been injected with one of those calming hormones some pregnant women produce. The final page brings in some of my favourite foes, but I'm not worried for Jessica for one minute - she's so ridiculously experienced at this point that she'll cope easily. Her venom blasts mean she could likely take them out without moving an inch.
And I don't care about Porcupine one bit. The reformation angle is great, but let's move him on to one of Marvel's many team books, let him grow among a more varied cast. 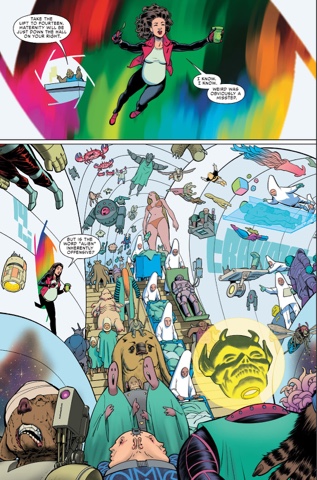 So here's another Spider-Woman #1 - same creative team, slightly new set-up, but still not for me. The confident, amusing script succeeds in reintroducing us to today's Jessica Drew, the art is lovely throughout, with great layouts and fine character portraits, the tone is consistent.. I hope it succeeds - but unless the likes of Mandrill, the Brothers Grimm and Nekra show up, unless there's an injection of the intensity that made the original Spiderwoman great, I'll pass.
Alvaro Lopez Captain Marvel Dennis Hopeless Javier Rodriguez Spider-Woman #1 review