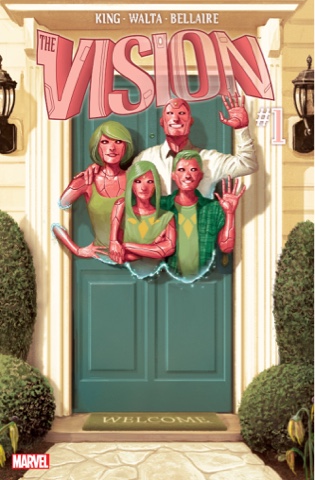 The Vision has embarked upon a project. The synthezoid Avenger has tried to build the perfect family. Literally. He's made a synthezoid wife, Virginia, and children, Viv and Vin. They live in the suburbs, in a commuter community handy for Vision's new job as Avengers liaison to the President. The Visions are getting to know the neighbours. 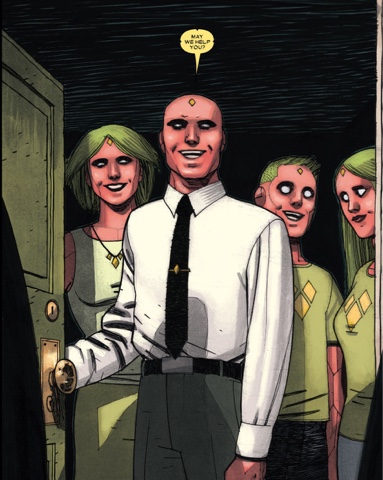 Now here's something truly different from All New, All Different Marvel. A solo series for a character who was once one of Marvel's most popular but has been consistently weakened over the past couple of decades. He's been torn apart several times, had his marriage to Wanda the Scarlet Witch dissolved, found his children to be magical constructs and most recently, voluntarily given up the human emotions borrowed from the brain patterns of Avenger Simon Williams.
I don't think that last bit worked. Why else is he trying to recreate what he had with Wanda? Certainly, he's trying to keep those pesky emotions out of the equation, but the fact that he's trying it? Emotional. And teenagers Viv and Vin, their brain patterns a combination of their parents, are already showing they have feelings in this debut issue. As for whose mind formed the basis for Virginia, that's a mystery left on the table by writer Tom King, and I can't wait to find out. The obvious candidate is Wanda, but on previous form, King is likely to go somewhere else.
This is simply the best debut from the House of Ideas since Ms Marvel. Actually, it's the best first issue from any publisher since The Omega Men from DC. Which is also by Tom King. Whereas the DC book puts mystery at the heart of the narrative, making the reader work for satisfying solutions, here King doles out the information via an omniscient narrator. While this makes the book less immediately challenging, the story is every bit as compelling. Instead of 'what's going on' it's 'where the heck are we heading'? What is the Vision thinking, surely, given his history with Ultron, Jocasta and who knows how many other off-centre artificial beings, he knows this can't end well?
The reader is left in no doubt early on, as the narrator tells us what's going to happen to a pair of bit players, 'near the end of our story'. Because King's done such a terrific job of introducing us to them, I really cared. And at the close of this issue, while Vision is away running some self-diagnostic tests at Avengers HQ, the proverbial chickens really come home to roost.
While King's narration is detailed, it isn't overwhelming, with plenty of space in the story for character to be revealed by dialogue and action. In just a few scenes he imbues Virginia with a poignancy, she instinctively seems to realise this 'perfect life' her husband has set up can't work. She's in the ultimate arranged marriage yet unable to be the unquestioning good wife Vision expects. 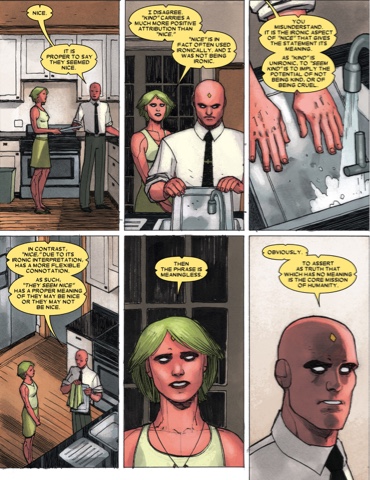 Vision, too, is seeing the cracks appear, though in his case it's more about analysis than instinct. As for the kids, their first day at school has them confronted with the questions every teen has... 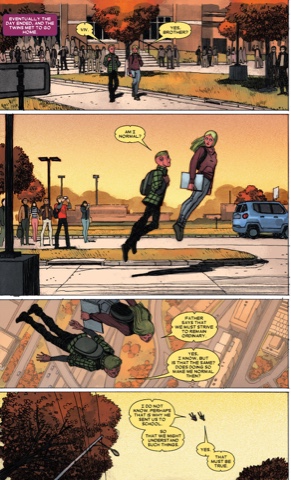 A review can't convey how good this comic is - there's no big fight between hero and villain, but the script is riveting nonetheless. And in Gabriel Hernandez Walta, King has the perfect artistic partner; his suburbia looks ordinary, the neighbours everyday, but the Visions - despite their attempts to fit in with their carefully considered, understated clothing - are unquestionably 'other'. The outfits, coloured to match their synthezoid colouring, peg them as a unit, parts of a whole. Aspects of a very skewed Vision.
It's amazing how much emotion Walta can get into orb-less eyes, while the body language of the adults - a poise not shared by the kids - sets Vision and Virgina apart. The storytelling compositions are spot on, and when physical conflict arrives, Walta sells the sequence with pizzazz.
Colour artist Jordie Bellaire's autumnal tones bring a melancholia to proceedings, a warmth that can quickly embrace a darker moment or two. The arrival of the Vision into the story,  from the shadows as curious George and Nora welcome them to the neighbourhood, is typical of Bellaire's subtle touch. 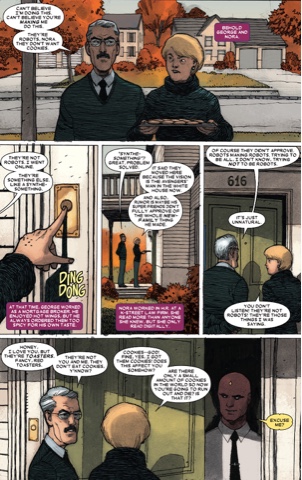 And Clayton Cowle's no-nonsense lettering, set against well-chosen tones, complements the artwork. Extra credit if Cowles came up with the clever cover logo, which sits nicely against Mike Del Mundo's clever cover.
If you didn't try this unexpectedly unsettling book and have some spare cash, rush back to the comic shop, have them hold a copy until your next visit or buy it digitally. But don't miss a stylish new series that uses the Vision's history to go somewhere new and decidedly exciting.
Clayton Cowles Gabriel Hernandez Walta Jordie Bellaire Mike Del Mumdo The Vision #1 review Tom King