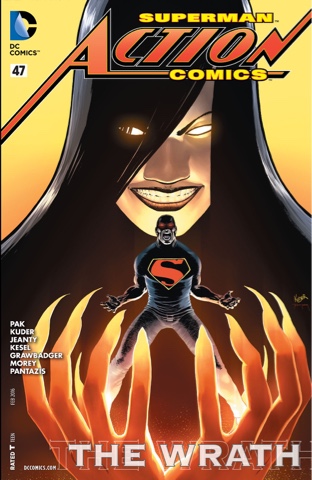 Me, and my shaaaaadow... It's the third part of Superman vs Wrath, Metropolis politician turned corrupter of souls (apparently there's a difference). As this issue begins, her inky blackness has messed up Superman to the extent that he's akin to a mindless beast, battling a similarly blank Frankenstein, Agent of SHADE (I see what they did there).
Firefighter Lee, Superman's neighbour turned ally, is being forced to watch the fight, with Wrath strangely invested in persuading her to lose faith in her friend. But she doesn't, and her attitude proves justified as Superman overcomes the dark tendencies Wrath insists represent his true self. Superman resists Wrath's tricks, such as having him appear before best pal Jimmy Olsen and wee children and scaring the heck out of them; she insists this shows he's as much a child of the dark as her, but he's not having it. Wrath wants him to give her the final piece of him, the part untainted - if he succumbs to his anger, his petty worries will be gone and together they can save the world by 'cleansing' it of the weak. 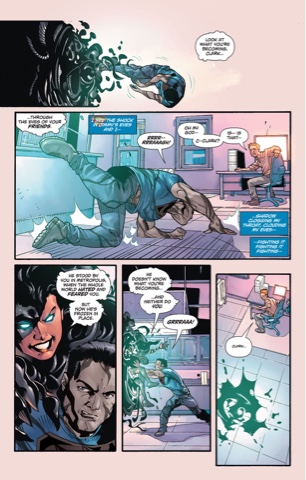 Superman's faith in himself is unshaken - he doesn't just open himself to Wrath's inky tendrils, he embraces them, and turns the tables on her... who's the dark daddy? Her inability to control Superman, despite metaphorically sitting on his shoulder like a little devil, frustrates immortal villain Vandal Savage, and he takes away her powers and imprisons her in the box from which the blackness first came. Savage, we learn in a spot of expository dialogue, made Metropolis mayor Jenny into the creature named Wrath, using her anger at Superman to shape her into something new. An idealist, she had become embittered when first Brainiac razed Metropolis - killing her mother - then Superman became a Doomsday creature.
So goodbye Wrath, we barely knew you.
Not that we cared ... sorry, I shouldn't speak for the group, but goodness, she's been an unengaging antagonist, her leering madness annoyingly over the top and her plot to corrupt Superman supremely tired. As a manipulator from the shadows - think Nocturna or Dr Cyber - Wrath might have been interesting; as it is, she's been all too panto.
Still, I give scripter Greg Pak credit for making it clear that while Superman may be temporarily caught off guard by emotional threats, the essential Clark will reassert himself. He knows who he is, Lee recognises that, even Jimmy - whom Wrath claims is terrified of him - seems more concerned for his friend. 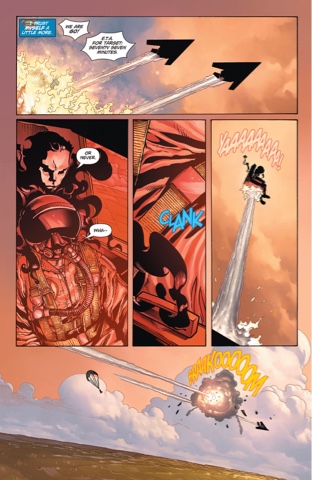 And where the Superman/WW series/atrocity has Superman endangering everyday folk, here Superman is careful to get a pilot out of the way before destroying an aircraft carrying Wrath's anger bombs.
This, for me, was the most intriguing aspect of this issue: 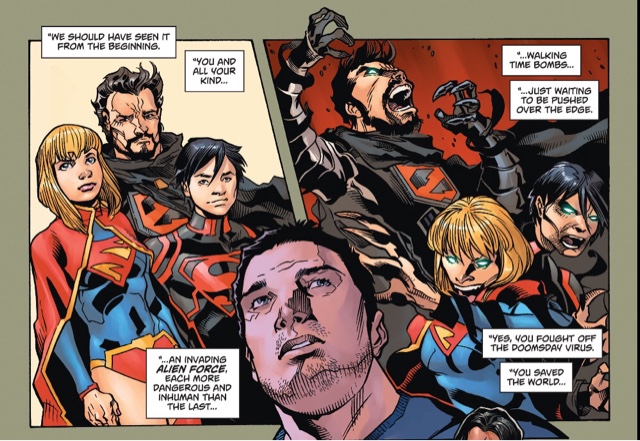 Actual acknowledgement that Supergirl hasn't been retconned away by DC - I was beginning to wonder, given we've not seen her for months. The cliffhanger from her most recent book's run remains unaddressed (weirdly, a version of it looks set to be incorporated into the TV show) and she's been illogically absent and unmentioned during the Truth storyline. One day we may see her again in more than a flashback.
Georges Jeanty is our penciller this month and his work suffers by being inked by four hands - all individually talented, but failing to gel across the issue. I like Jeanty, he has an interestingly liquid cartooning style, but I wish we were getting regular penciller Aaron Kuder. Co-plotting with Pak isn't enough, I've grown accustomed to his beautifully bombastic layouts and characters. Presumably, there was a deadline crunch, so well done to the creatives for getting at least a competent wrap-up on our hands.
Kuder does provide the cover, with the issue's co-colourist, Tomeu Morey, and it's striking, though Wrath looks a bit silly, like she's emerging from an oil slick.
Next, an Action Comics Annual which, I believe, will shed light on Savage's grudge against Superman. And if it takes us a lot closer to the wrap-up of the ill-conceived, narratively confusing and just plain unwelcome Truth sequence, all the better.
Aaron Kuder Action Comics #47 review Georges Jeanty Greg Pak Tomeu Morey