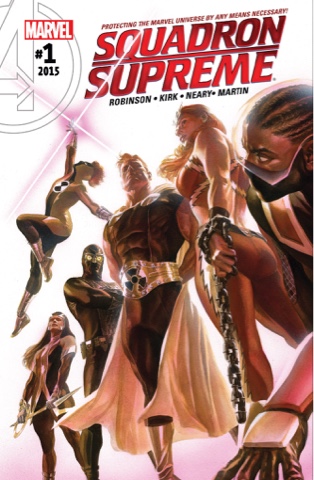 There's a new Squadron Supreme in town and they mean business. Survivors of five different Earths lost in the recent Secret Wars, they've banded together to make sure nothing kills their new home. And the first act of this band of multiversal refugees - Nighthawk, Princess Power, Hyperion, Blur and Dr Spectrum - is to get revenge on Prince Namor. The Sub-Mariner destroyed Dr Spectrum's planet and she wants her pound of flesh. 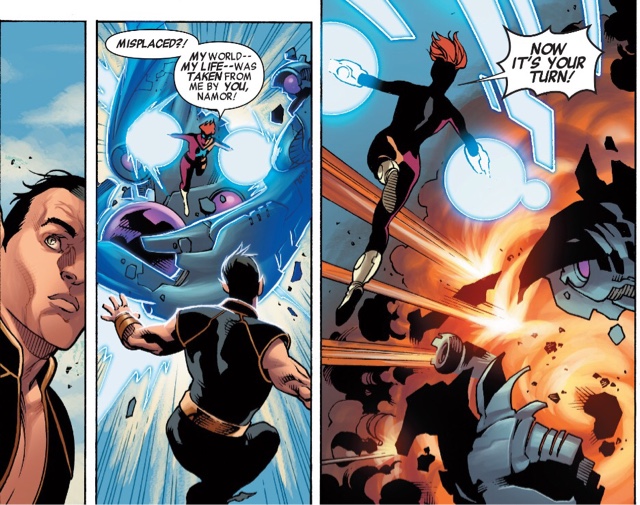 A confrontation with Namor and his armies goes beyond anything that might be expected, and the world reacts. People who have lost loved ones due to the actions of metahumans are all for a tougher approach to protecting the planet. Others believe the more regulated approach of the Avengers - well, those Avengers who weren't members of the Illuminati - is the way forward. 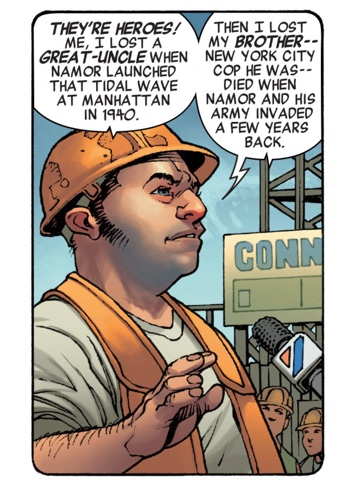 Me, I'm keen to see where things are going. Marvel have tried several times to recapture the lightning in a bottle that was the Mark Gruenwald/Bob Hall/Paul Ryan maxi-series. That saw a version of the team try to reshape their world into a Utopia, and it was magical. This launch looks to feature the Princess Power from that landmark book and the Nighthawk from the J Michael Straczynski version, I'm not sure. It probably doesn't matter, as this launch's writer, James Robinson, has the talent and drive to create something new from the pieces he's selected.
I'm interested to see where things go as the Squadron's stated aim to take a firm grip of the planet can't but put them on a collision course with Earth's more traditional heroes. Unless this series is going to feature the Squadron Supreme vs a team of differently self-righteous metahumans every issue, I can't see where it can go.
But I look forward to finding out. Especially as Thundra is taking an interest in the Squadron, and I've had a soft spot for Marvel's favourite Femizon ever since I saw her drawn by the sublime Ramona Fradon way back in a Seventies Fantastic Four. 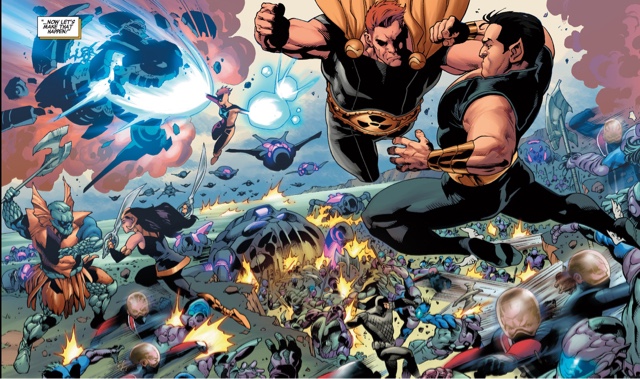 And I've enjoyed Leonard Kirk's art since he co-created - with Barbara Randall Kesel - Marvel's vastly underused Ultra Girl back in 1997. His pencils remain a pleasure, suiting the big-scale battles of this opener. There's one moment in particular in which he really captures the shock of what's happened...
Kirk is paired with inker Paul Neary and the puzzle is, where did the latter go? Neary is a proper old school illustrator, a real craftsman who can do pencils, inks or both, but I can't see his imprint at all; it's as if Kirk's pencils were given straight to colourist Frank Martin. The pages look good, but with Neary named alongside Kirk I expected something stronger.
Alex Ross' cover is good-looking, but it feels like I've seen this shiny image of constipated characters a million times previously.
This first issue didn't knock my socks off - it's pretty much all action, and character is where Robinson excels - but the record of the creators involved means it merits a second look. Perhaps in time it'll be Supreme, but so far this Squadron is merely So-So.
Alex Ross Frank Martin James Robinson Leonard Kirk Paul Neary Squadron Supreme #1 review