We Are Robin #7 review 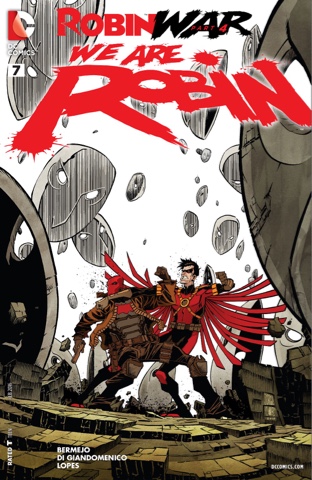 The Gotham authorities have cracked down on the We are Robin kids, locking several up in a new, decidedly dodgy, prison facility. Alongside them is current official boy wonder Damian Wayne and below, ordered by the Court of Owls to fight to the death, Robin graduates Red Hood and Red Robin.
Elsewhere, original model Dick Grayson has teamed up with Canned Batman Jim Gordon to break into the office of Councilwoman Noctua. Learning that she designed the Cage holding cells, they correctly surmise that she's deeply involved in the corruption infecting Gotham.
Writer Lee Bermejo uses the temporary situation of Gordon-as-vigilante to address the fundamental Robin riddle - just how could Commissioner Gordon, a father as well as an officer of the law - countenance Batman putting little kids in the line of fire? 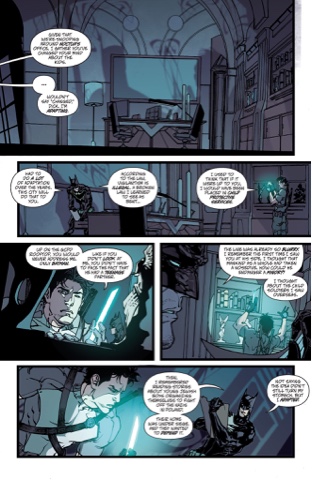 No one could come up with a totally satisfactory solution - police supporting  the use of kid sidekicks can't ever make sense - but Bermejo provides a more than satisfying scene.
That's not the only great moment... Street Robin leader Duke Thomas learns a lot more about what it takes to be a Robin via interaction and observation. And Bermejo asks artist Carmine Di Giandomenico to choreograph a complicated escape sequence and he pulls it off, allowing Tim Drake to do the same. An artist with less of a knack for fluid composition could easily have been all at sea, but Di Giandomenico rises to the challenge. Conversations are also his forte, meaning a tense exchange between Damian and Duke has the weight it needs. Colourist Mat Lopes aids the mood while Jared K Fletcher's letters don't lack personality. And Jorge Corona's cover is a nice teaser for the insides.
With every instalment, The Robin War is looking ever more likely to be one of the best Batman crossovers. I can't wait to see what happens next.
Carmine Di Giandomenico Jared K Fletcher Jorge Corona Lee Bermejo Mat Lopes Robin War We Are Robin #7 review
Location: Seaham Seaham