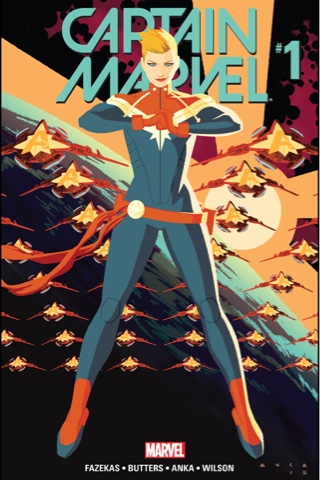 Carol Danvers. She loves trouble. So her taking a desk job as commander of Alpha Flight Space Station - Earth's first line of defence against threats from outer space - is puzzling. But, she wants to get away from home for awhile, take time out from the hurly burly of her everyday heroic life. And it's not like there aren't problems to be solved - the space station waste disposal guys, for example, are a real irritant... 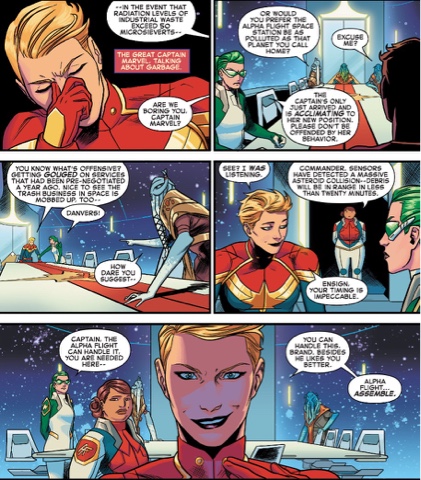 Happily, when danger nears, Carol can fly out into space and punch something. This debut issue - what is it, Carol's fourth in the last 10 years? - has her bashing an asteroid set to wipe out her new HQ, aided by the high-flying members of Alpha Flight the super team. But is it a natural occurrence, or something more targeted?
Captain Marvel's latest relaunch has a distinct whiff of deja vu, as she says goodbye to sorta boyfriend Rhodey, aka War Machine, for a sojourn in space - just as she did in the first issue of her 2014 run. Given that all the time she spent barking technical commands at her spaceship's AI finally put me off that well-crafted book, I wasn't sure another space-based run would appeal. But, as a Carol Danvers fan of old, I had to try her latest series.
I like it. Michele Fazekas and Tara Butters write a very appealing Carol - measured, but not too militaristic, fun without being overly flighty. Basically, she has her head screwed on. She's a likeable leader, as opposed to Abigail Brand, former SWORD chief and now Alpha Flight's Lt Commander, whose spikiness could cut through adamantium. Given that Alpha Flight looks to be a renamed SWORD, jealousy seemed key to Brand's particular coldness towards Carol, but no... 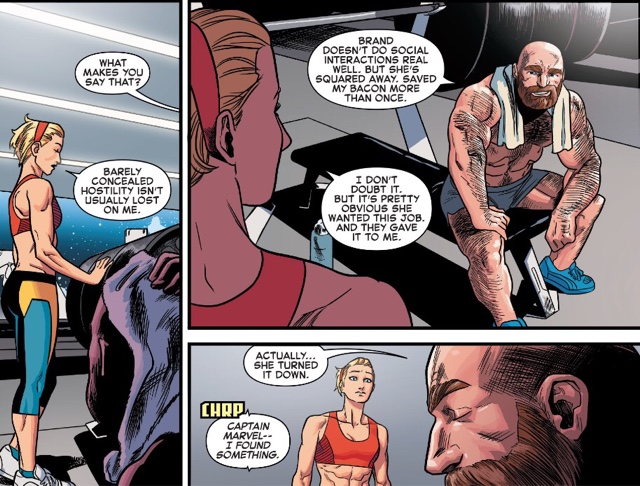 I dare say we'll find out what's up with Brand Echh, and why Puck looks so sad, as supporting characters seem key to this book. Fazekas and Butters take care to introduce Carol's core cast - as well as Brand, there's Carol's former PA, Wendy Kawasaki, the base's science officer; and the aforementioned Alpha Flight members, Puck, Aurora and Sasquatch.
I'm delighted to see the latter three, Canadian heroes who aren't used nearly enough. So far, their operational role seems to be to support Carol by piloting rather smart mini-spacecraft, but their well-established personalities will provide interesting sounding boards and story springboards. Already she's making friends with Puck, who's looking better than usual under artist Kris Anka.
I do hope, though, that there'll be room for the original Alpha Flight members to spread their wings, I really don't want them banged up in spaceships; superheroes in flying machines is something of a waste.
While she can zoom through the atmosphere under her own steam, it'd likely take Carol awhile to fly 250km, so she has help - but rather than the usual shuttlecraft, we get something to else - the appropriately named Aerolith. And I love it. 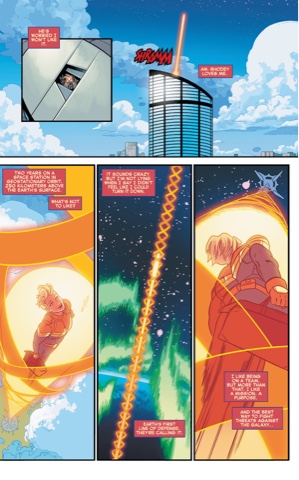 Kris Anka looks to be having a blast, his artwork - coloured by Matthew Wilson - complementing the pacy, witty script nicely. Just look at that beautiful cover, apparently coloured by Anka himself. The space station design, inside and out, is appealing and while I don't want to watch superheroes flying them, again, the titchy spaceships are pretty cool. The storytelling is first rate, with the only bump being that the final image doesn't quite marry to Carol's dialogue.
Still, I'll be back next time to see how things develop. Agent Carter writers Butters and Fazekas, in their first published comics work, show they have what it takes to kick off a series, setting up scenario, characters and hinting at the book's direction. Shout-outs, too, to editor Sana Amanat and assistant Charles Beacham (not Beecham, as on the editorial page), for their undoubted guidance and support, and always excellent letterer Joe Caramagna. I'm keen to see where Carol and co go from here - onward and upwards... but preferably not always in spaceships.
Alpha Flight Captain Marvel #1 review Charles Beacham Joe Caramagna Matthew Wilson Michele Fazekas Sana Amanat Tara Butters