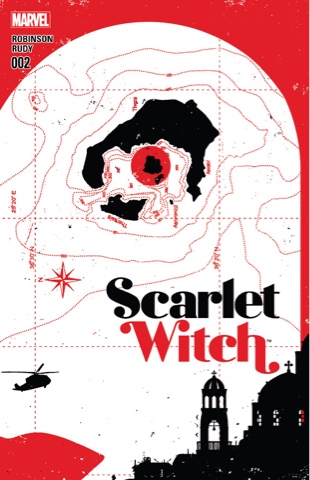 It's tough to get on with writing a review when you can't stop looking at the art. It's only the second week of January and I've no doubt Scarlet Witch #2 will be one of the best-looking comics of 2016. Just look at Marco Rudy's work...

Wanda has travelled to the Greek island of Santorini to investigate a disturbance in the For... sorry, Magic. Something feels off, so the Scarlet Witch has sought out an old - very old - acquaintance. Hecate, patron goddess of witches.
As it turns out, Hecate does feel something - the magical aura surrounding the Minotaur terrorising the island. Putting a stop to the threat may bring Wanda a step closer to discerning why Magic feels broken. 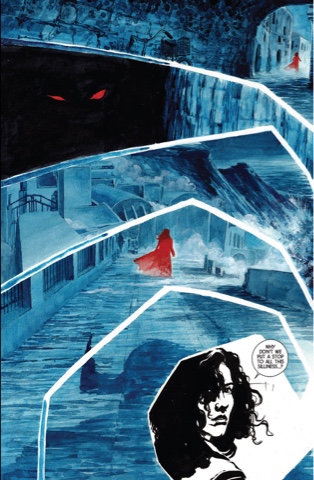 And that's exactly what happens, making this standalone story work as a larger chapter of James Robinson's grand narrative. Robinson digs deep into myths, both Marvel and Greek, as he builds up both Wanda's character and the world of enchantment she inhabits. The inevitable triumph over the Minotaur is a little too speedy, but it's not easy - there is a toll to be paid, one tied to that mirror I was wondering about in my review of Wanda's first issue.
The conversation between Wanda and Hecate is fascinating, vintage Robinson. Hecate recalls the Shade from Starman in her capacity to be sometimes friend, sometimes foe; I like these portrayals, they make sense in long-lived characters. 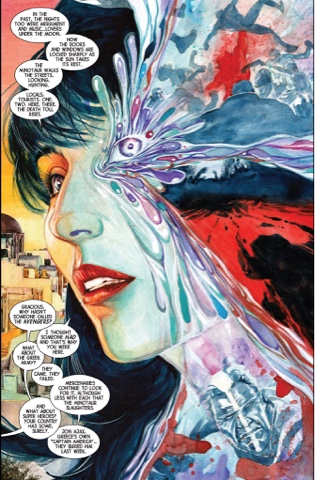 And that art. I was lucky enough to be in Santorini in October and Rudy gets it spot on. I've no doubt that off-panel there are a dozen overworked donkeys... the buildings, the sky, the sea, Rudy captures it all, adding some magic all his own. And no wonder, his Instagram tells me one image alone took 20 hours.The panel shapes in the page design add extra interest, I assume Rudy is inspired by the Minotaur of old's Labyrinth - there's even a keyhole-shaped box to get us in there. Colouring his illustrations means Rudy controls the mood, allowing for some smart emotional underlining.
Cory Petit has a lot of work to do, getting Robinson's meaty script on the page without wrecking the art, and he manages it marvellously. Finally, David Aja's cover is another gem, mapping Wanda's face and an island in striking style.
Scarlet Witch #2 is not so much a comic, more a magical artefact; buy it.
Cory Petit David Aja James Robinson Marco Rudy Scarlet Witch #2 review