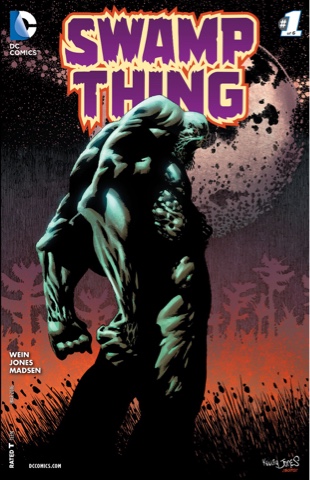 A monster stalks the swamp. And another, less friendly freak creeps around the college. It's Swamp Thing versus a zombie named Lazlo as the big green guy gets another series from DC. This latest run is a six-issue deal only, but as it's by Swampy's co-creator Len Wein and master of the dark art Kelley Jones, it's likely to prove a treat.
Wein gives us a quick origin reminder, shows us Swampy's abilities, has Phantom Stranger drop by for a cameo and then gets into the meat of the issue. Rotten flesh, in fact, in the gnarled, smelly form of Lazlo Wormwood, who went to college and graduated with a degree in murder. No one turned Lazlo to sludge but he's definitely got a grudge against the lecturer and students he blames for his condition. Surely Swamp Thing can teach him a lesson...
While Swampy's a little rough on 'Albert the Alligator' - a Pogo reference, youngsters - I can see how a presumption hungry gator can make a bog monster cranky. Wein's Swampy just wants to be left alone, most especially by his woody forebears.

I couldn't agree more, I'm exhausted by Swamp Thing stories continually centring on those self-important plant gods. Let the actual star of the comic be the swampiest soul around for awhile.
While I'm always chuffed to see the Phantom Stranger, I'm surprised his usual empathy isn't present as he warns of a coming danger, then vanishes. Mind, we do get this cute moment.

And who knew Swampy could roll his eyes?
Wein's deliberately ornate narrative style, dripping with gothic, is a treat. This is a comic in which you don't have a 'mouthful', you have a ' mawful'. I love it when a writer does the Writer bit with enough skill not to come across as utterly pompous and dreadfully dry. Even when he's telling us something that's in the image, generally a no-no in comics, it works because the words aren't throwaway description, they build atmosphere. And I grinned broadly as Wein unfurled his classic 'muck-encrusted mockery of a man' line.
The simplicity of Swampy versus a dropout zombie is a real palate cleanser after the overlong tales he's been stuck in of late, and it's not like Wein is taking away the Parliament of Trees - he's just taking them off the table. There's apparently a bigger threat coming, but a few fun shorts along the way are fine with me.
The creative chemistry between Wein and Jones is immediate. Jones' pencils and inks lend a magic to the Houma swamp, making it very much its own world, a place of Otherness. And his Swampy looks massively strong, while being expressive. The organic inkiness of Jones' work is reminiscent of Swampy's artistic daddy, Bernie Wrightson, but he's an original. Plus, he adds little bits of humour such as the leaf stuck in the hair of Lazlo's pop, Frank. As for his Phantom Stranger, it's probably the spookiest version I've ever seen. 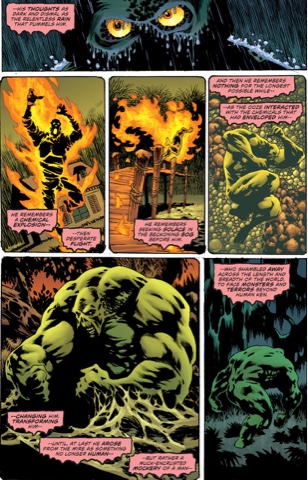