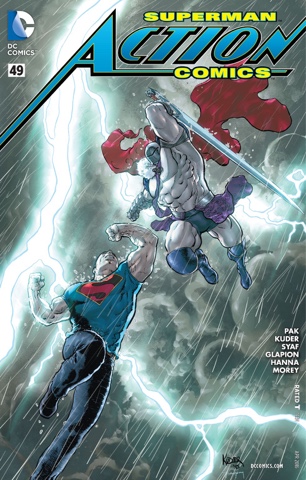 There's a moment in this comic that pretty much sums up my reaction to the continuation of the Truth storyline, which features a depowered Superman lost in a world of grumpy people.

Thank you, Justice League.
This is a frustrating issue. There's loads of talent on display, from writer Greg Pak to co-writer and layout artist Aaron Kuder, penciller Ardian Syaf, inkers Jonathan Glapion, Scott Hanna and Sandra Hope, colourists Tomeu Morey and Wil Quintana and letterer Steve Wands. But it's, well, not so much utterly wasted - there are some decent moments, and the flashy art is fun - as not put to best use.
The recap: Vandal Savage finds another of his many descendants, a bullied fan of barbarian comics, tosses a purple mist and bauble at him and he becomes Salvaxe, who has 'the strength of a god' and the dress sense of Liberace.
Superman, meanwhile, has jumped into a roomful of green Kryptonite because he's theorised it will burn away mutated cells stopping him absorbing solar radiation. He emerges buff and burning with power, enough to give him a shot at foiling Vandal Savage, who stole his strength, turned the world against him and currently has two Justice Leagues tied up in a trap they can't escape cos this ain't their book.

Wonder Woman was meant to be trying to free her colleagues, but she's apparently been hanging around waiting to hook up with her no-longer-boyfriend, Clark. Their reunion is interrupted when a new power the Green K has given him - kinda sorta super-hearing - alerts him to the Immortal Villain's latest play, a great big energy beam firing outwards from the League's Watchtower he's taken over.
To distract Superman, Vandal throws Salvaxe at him, and they have a big old fight while Wonder Woman continues on to hopefully stop Vandal.
And the story doesn't end here, it's continued in the next issue of Superman/Wonder Woman. I know, you're stunned.
Debuting bad guys often have taglines. Multiplex, the Duplicate Villain. Firefist, the Incendiary Man. So make way for Salvaxe, King of Barbarians. The Disposable Nobody, more like. Pax doesn't even bother to give him a pre-villain name. There is no reason, I can see, for Vandal to bring another of his previously unknown brood into play. He already has Hordr_root, Puzzlerbot, that inky woman...Wrath, was it? There are a few more hanging around his spaceship this issue, and I can't remember if we've even seen them previously. I suspect Aaron Kuder, who has already shown us how good he is with bulky barbarians, wanted to draw another. So here's one more, all bulging biceps, thighs that could crush very big walnuts and... tiny head? 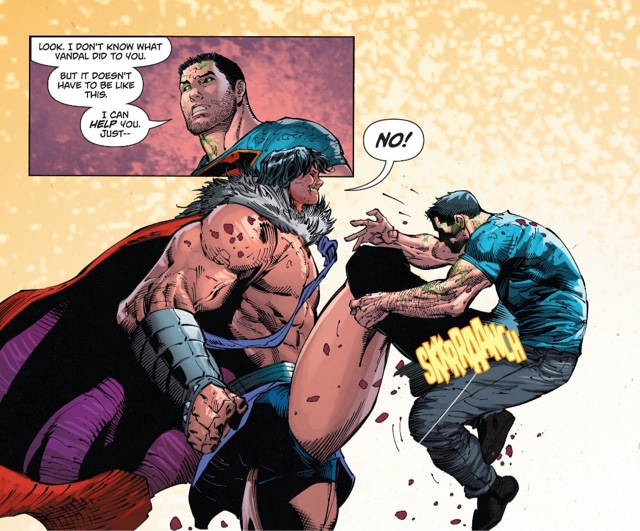 The fight is rather fun, but there's no hiding that this is just padding to get us closer to the 50th issue, when the Truth storyline is set to end. We're as likely to see Salvaxe again as we are Booster Gold's version of Mr Twister.
There's a bit of an artistic glitch on the first page. 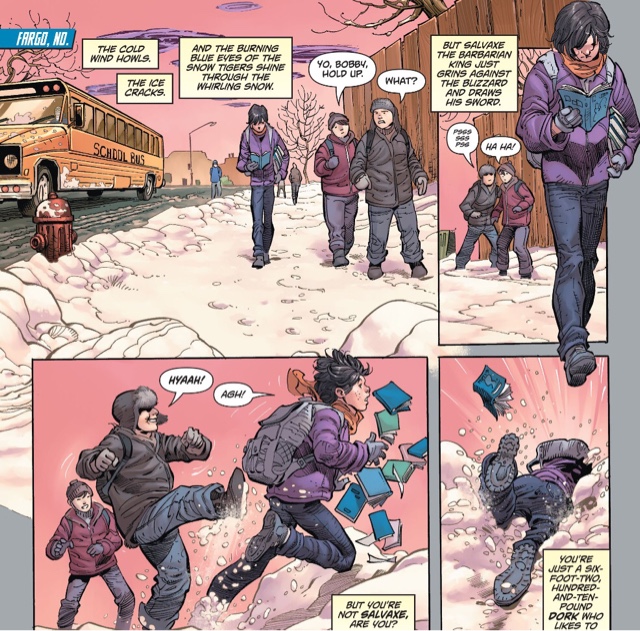 How tall? The kid and bullies look about ten. Later pages make it clear he's at least a late teenager.
Given how withered by Green K Superman was in his other title last week, it's jarring to see him back to his usual, massively muscular look here. Kuder and Syaf have Clark looking fantastic, which helps the fight scenes, but editors Andrew Marino and Eddie Berganza might have usefully tweaked the script to cover the disparity.
There were things I liked, apart from the visuals by Kuder - who looks to have supplied very tight breakdowns - and the always strong Syaf. Superman's compliment to Wonder Woman. The fact that he cares that his personal relationships have been buggered up. This line.

It's just a shame that creators of the quality of Pak and Kuder, who were set for a memorable run before Truth got in the way, are having to service a crossover storyline with no point beyond its high concept. They're hugely talented, have ideas and DC should have gotten out of their way.
Aaron Kuder Action Comics #49 review Andrew Merino Ardian Syaf Eddie berganza Greg Pak Jonathan Glapion Sandra Hope Scott Hanna Steve Wands Tomeu Morey Wil Quintana