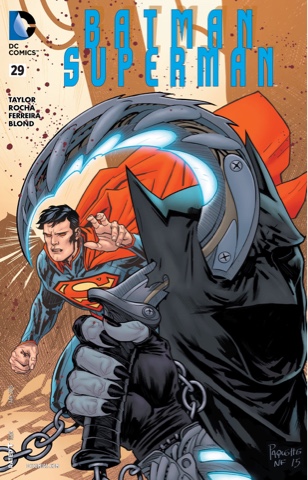 The World's Finest heroes are on the moon, trying to learn who murdered a giant space explorer. Alien assassin Lobo is watching them, his interest unknown. A second giant arrives, this one alive, and the pair surmise it's the father of the female corpse. Green Lantern tech 'borrowed' by Batman allows Superman to communicate with the father and we learn that his daughter was explaining an area of the cosmos known as Scorch Space. Superman flies off to investigate what she found that got her killed, leaving Batman to question the father further.
According to rumours, Batman/Superman is folding soon, along with Superman/Wonder Woman, to be replaced by a team-up series featuring all three. If that's true, I'd be happy to see Tom Taylor given the scripting assignment. His two issues of this series to date have been a delight, showcasing a strong, wry Superman and a Batman quietly thrilled to have found someone with whom he can let his deadly serious guard down. The well-worked plot has twists, it has turns, it has Lobo... oh well, you can't get everything right.
Penciller Robson Rocha and inker Júlio Ferreira's art is smooth, but not without character. The storytelling is crystal clear, and when they have a big moment, they grab it with bo.. all four hands. 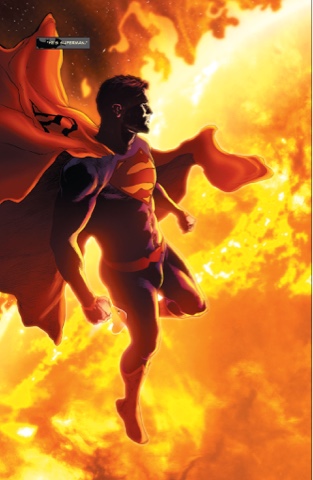 The rich colours come from Blond, the sharp letters from Rob Leigh.
Yanick Paquette's cover, coloured by Nathan Fairbairn, isn't my favourite, all that grey on the mask, hand and blade made it tough to parse, visually. I like the idea better than the execution. (Paquette and Fairbairn fill in on this week's Batman #49 and it's simply gorgeous.)
While the drab rollercoaster ride that is the Truth storyline rumbles on in the other Superman books, Batman/Superman has become a haven of delightful superheroic sanity.
Batman/Superman #29 review Blond Júlio Ferreira Nathan Fairbairn Rob Leigh Robson Rocha Tom Taylor Yanick Paquette