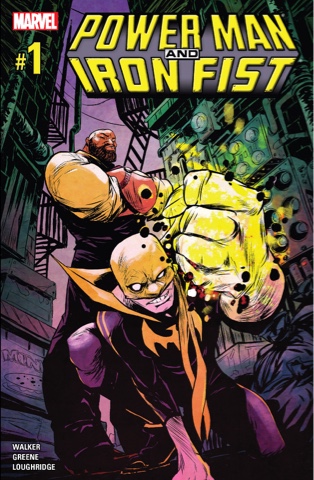 Together again, again,
Gee, it's good to be together again, again
It's not often a comic has me singing Muppet tunes, but just seeing Luke Cage and Danny Rand share a title again brought a broad grin to my face. Well, once I recognised them - Luke has always been a big fella, but artist Sanford Greene makes him a massive bear of a man, and about a decade older than when we last saw him... a month or so ago. Danny seems tiny by comparison. 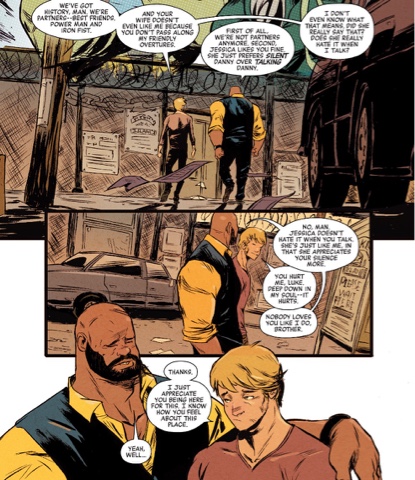 Which isn't to say I don't like the art, just that the new-look Luke will take some getting used to; still, I got used to an earlier appearance change around the time of Brian Bendis's Avengers, so I expect I'll adjust to this. Heck, I'll probably buy a Power Bear plush.
There's a warmth and whimsy to Greene's art which I like a lot; he's having fun drawing the characters and it shows. There's real vibrancy to the New York he presents with colourist Lee Loughridge, and the scene with baby Danielle, Luke's offspring with Jessica Jones, is adorable. Plus, the book's action sequence is a delight. 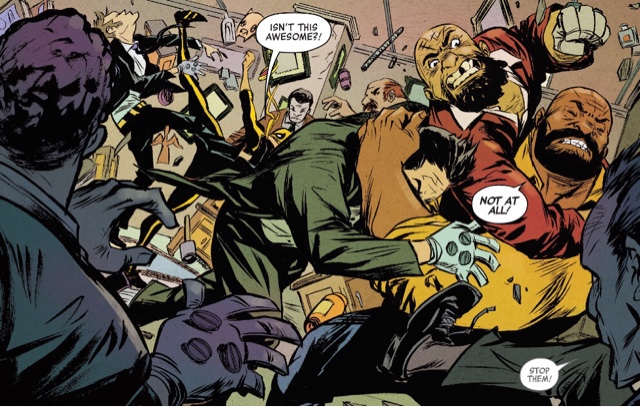 Awesome indeed. So what's got Danny and Luke into trouble? They're on an errand for onetime Heroes For Hire office manager Jennie Royce, just out of jail for the murder of her deadbeat 'superhero' boyfriend. She says she didn't do it, Luke and Danny believe her.... but it seems she didn't get many visits from them, and neither did they try to prove her innocence. So Danny and Luke feel they owe her, and when she asks that they retrieve a family heirloom from supervillain Tombstone, how could they refuse?
Writer David Walker quickly establishes the chemistry between puppyish Danny and wary Luke, and the direction of the story. He ladles the script with easy, organic humour, including a couple of nice running gags. Luke and Danny are a tad more naive than I'd expect, but I can accept it in the circumstances. The only jarring line in the script is when Jennie refers to herself as white - I read the entire issue thinking she was African American ... looking at Google Images of earlier appearances, it's safe to say prison changed this gal. 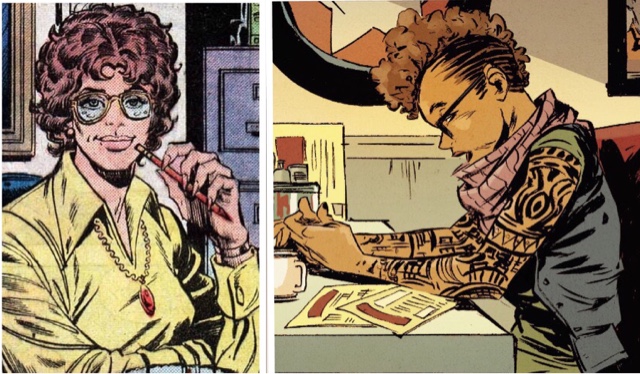 I shall blame whatever happened at the end of Secret Wars - in the remade Marvel Universe, Jennie Royce uses a lot of fake tan. In other matters of colour, I wish to God someone at Marvel would give Danny back his classic green Iron Fist costume - I don't care what the story reason was for the change to first white, now purply brown, he just looks wrong.
I dislike the cover: Danny looks like a drug-crazed loon while Luke's head is a very odd shape. I nearly passed up this issue because of it, but took a gamble, had huge fun with it, and the surprise character on the last page guarantees I'll be back. If you've any affection at all for Luke and Danny, give this book a try.
David Walker Lee Loughridge Power Man and Iron Fist #1 review Sanford Greene