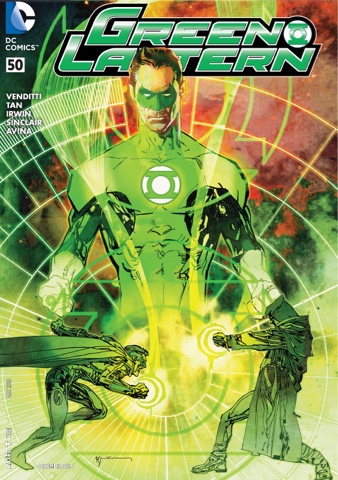 Here comes Mr Jordan. And Mr Jordan. It's Hal Jordan vs Hal Jordan. Green Lantern against Parallax. The former, wielder of a gauntlet of power containing the energy of a dozen Oan rings. The latter, living conduit of 3600 of the trinkets.
So of course, Gauntlet Hal wins.
Let's backtrack. Parallax is the Hal of a previous universe, or perhaps the current universe before it was remade by the Flashpoint event, and somehow shaved off into a separate being. It's something to do with the Convergence crossover - I remember Parallax was one of the characters who undid the Crisis on Infinite Earths, but I don't know what happened after that. Writer Robert Venditti doesn't tell us what's going as this issue begins - perhaps he covered it last time, but I've not been reading GL, Hal's recent overcoat-and-glove storyline having little appeal. But this is a Big 50th Issue, bound to pull in a few extra readers - why not give curious visitors a hand?
It's not like there isn't room. There are 40 story pages here. And boy, are they frittered away. It's as if Venditti gave pencillers Billy Tan and Vicente Cifuentes a 20pp script and said, 'spread 'em'. So say hello to two distinctly underwhelming double page spreads (pre-Parallax Hal in a trench meant to evoke a destroyed Coast City, Parallax in the New 52 reality, staring at the dull buildings of an intact Coast City); five full-page splashes, only one of which is a big moment worth spotlighting, and numerous pages comprising just two or three panels. 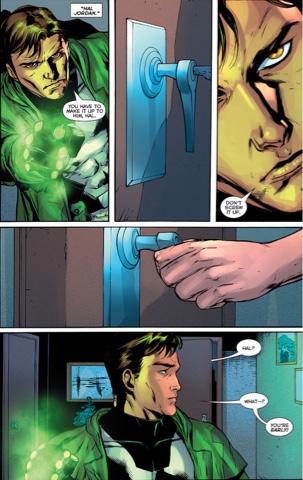 Deeply dramatic doorknob action there...
It's a shocking waste of real estate. Fair enough, some of the panels are used to mirror earlier images - the issue's title is Reflections - but at far too large a size
This isn't a terrible book. Bill Sienkiewicz's cover is terrific. A few of the individual images pull far enough away from the often plastic quality of the characters to be striking - with three inkers on the two pencillers it's unsurprising an overall, intense vision is absent. The scenes of Hal with brother Jack and his family are rather nice, with some decent folk wisdom. There's an intriguing change to Gauntlet Hal towards the end. The rest of the issue, though, is pretty much all Parallax brooding or the two Hals throwing green creature constructs at one another (and for two men obsessed with protecting Coast City, they ain't half lax when it comes to avoiding property damage).
Green Lantern #50 is very much an end of days issue. We know DC Rebirth is coming, and bringing changes, so here are the GLs of two continuities bashing one another for the right to be the One True Hal Jordan. As a 20pp, $3.99 book, this would be worth a look, but at $4.99, not so much.
Bill Sienkiewicz Billy Tan Green Lantern #50 review Robert Venditti Vicente Cifuentes