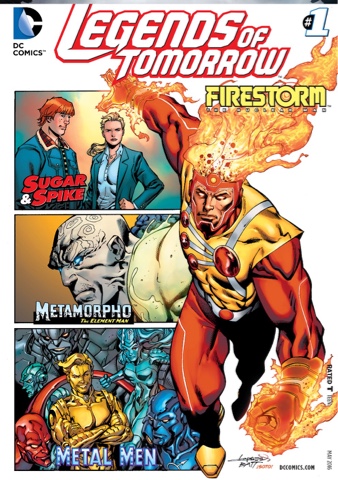 Behold the 80-page giant! A super-thick comic book featuring not a batch of reprints for 25 cents like in the Silver Age, but four new tales for $7.99. But given your average 20pp book costs $2.99 these days, if you enjoy more than two of these strips - originally intended as separate mini-series - that's a win.
So how were they?
Kicking off the book is Firestorm, justifying the Legends of Tomorrow TV tie-in title. This isn't the CW version, but the DC New 52 guy. Or rather, guys - Ronnie Raymond and Jason Rusch in the matrix, with a very Victor Garber Martin Stein the stereotypical absent-minded scientist behind the operation. And that's my only quibble with a sharp, fast-moving reintroduction to the characters - Professor Stein is working with two 'civilians' controlling massive fundamental forces, and really should have a tighter hold on the wheel. The nutty professor doesn't play so well these days. 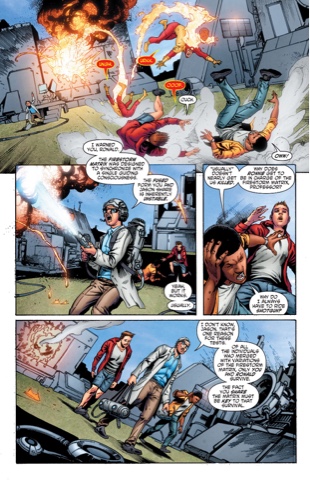 That said, I enjoyed this loads. Co-creator Gerry Conway sets up a nice mystery in terms of an unknown ailment threatening Jason and therefore Ronnie too, there's a classic villain in the shape of Multiplex and a very likeable supporting cast (is the splendid Monica Littman new, I don't recall her?). We even get nods to co-creator Al Milgrom and fellow artists Rafael Kayanan and Pat Broderick, which made me smile. OK, so there's no Doreen Day, but you can't have everything.
The art by penciller Eduardo Pansica and inker Rob Hunter is big and brash, with pretty fabulous facial acting - the characters have life and nuance. And while I've no idea what's going on in the American Football scene, it looks tremendous. All in all, a confident start to what I already hope gets its own spin-off book.
For the first few pages I was distracted by the non-classic colour scheme for Metamorpho but things quickly right themselves as soldier of fortune turned element man Rex Mason awakes to find himself a prisoner in Simon Stagg's lab. The industrialist claims to want to help Rex but he'd happily vivisect him if it meant unlocking the secrets of the Orb of Ra which powers him. Stagg's biochemist daughter Sapphire is more sympathetic, but Neanderthal turned scientist Java hates Rex with a passion. 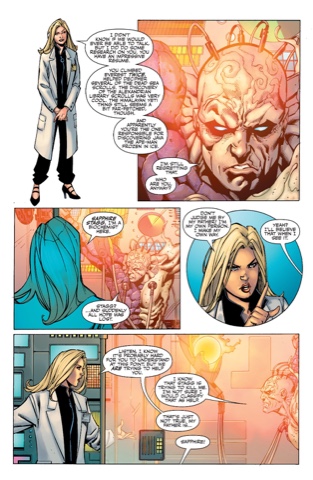 That last sentence may have oldies like me scratching their heads. Traditionally, Sapphire has been portrayed as a selfish ditz unworthy of Rex's love, but here she's pretty darn wonderful. And Java, surely he's nothing more than a thicko flunky? Still, if I'm moaning about Stein being a Professor Peabrain I likely shouldn't complain too much about writer-artist Aaron Lopresti's character tweaks. I can see how a blonde bimbo might offend one or two people today... but can't a caveman just be a caveman?
Ah well, we'll see where things go, Lopresti is an excellent craftsman, with a stylish, liquid line which is nicely embellished by Matt Banning. Lopresti knows how to build a page populated with vivid people and convincing backgrounds, and draws a very creepy Kanjar Ro! Yes indeed, the classic JLA villain is in here, coming to Earth to do who knows what. My favourite pages are the opening dream sequence, which is looser and livelier than the rest of the story, hopefully there's more of this approach to come as the cast heads to Egypt.
Len Wein is from the same generation of comic book writers as Gerry Conway, with both having made a massive mark on comics in the Seventies. And like Conway, Wein still has it, gifting the return of the Metal Men with an impressive script. The characterisations are immediately recognisable as Gold, Iron, Platinum, Tin, Mercury ('The only metal that is liquid at room temperature') and Lead take on the Missile Men minions of the sinister Nameless (presumably not Tin's Silver Age girlfriend of the same non-name name). 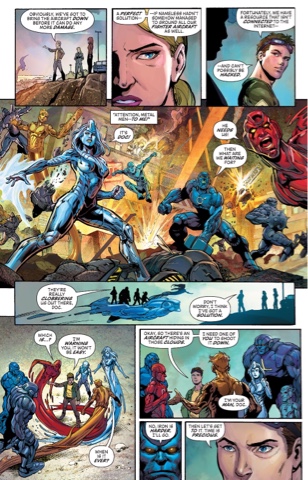 It's a shame the always excellent Yildiray Cinar has to draw the butt-ugly, super-fussy New 52 designs. They don't ruin the strip, but it'd be a lot better if we were looking at the classic Ross Andru models. The man was a genius and he got it right first time.
And finally, Sugar & Spike, Sheldon Mayer's classic kid characters all gwown up. This was the series I was most worried about because while I could probably take the 'it's just a spin on the old humour strip, a bad revamp doesn't take away from the original' approach, I'm a comic fan, attached to my favourite characters. And I just adore Sugar Plumm and Spike Wilson, the mischievous pair who carried their own book for around 100 issues in the Silver Age. I am a massive booster of writer Keith Giffen, but his record shows he's as likely to be the iconoclast as the fan. 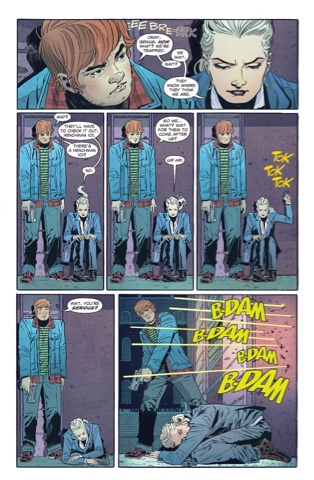 Happily, this is Giffen the fan and this is my favourite of the four LoT stories. These detectives are recognisable as the young adults the kids might become - she, no-nonsense, he, more wary and easily led. Heck, they even get their non-lethal guns from old pal Bernie the Brain - and thank goodness for that, Sugar & Spike murdering people, even bad guys, would be a deal breaker.
Visually, our hero and heroine hit the spot too - artist Bilquis Evely brings them to life wonderfully, right down to Spike's snub nose. I suspect Giffen is providing breakdowns, given how much Sugar reminds me of Legion of Super-Heroes member Laurel Gand, but if so, Evely still deserves bags of credit for building on them beautifully. The colours of Ivan Plascencia also deserve praise, giving each scene just the right mood. The caper sees Sugar & Spike tasked with breaking into Killer Moth's warehouse to grab back something that belongs to Batman, and it's a joyful slice of DC Universe life that fits directly into current continuity. That's not important to me, but seeing handless Alfred might bring in a few Batman completists. The story closes on a bittersweet note and I can't wait to see where Giffen and co take the lifelong friends next.
Who knows, we may even see them using 'baby jabber' on a job!
Throw in a terrific cover by Lopresti, Bannin and colourist Chris Sotomayor and you have one of the biggest bargains in comics - three good strips and one outstanding entry for the price of two. I'd love to see LoT succeed and continue with strips rotating in and out. So buy it already!
Bilquis Evely Eduardo Pansica Firestorm Gerry Conway Aaron Lopresti Keith Giffen Legends of Tomorrow #1 review Len Wein Metal Men Metamorpho Sugar and Spike Yildiray Cinar