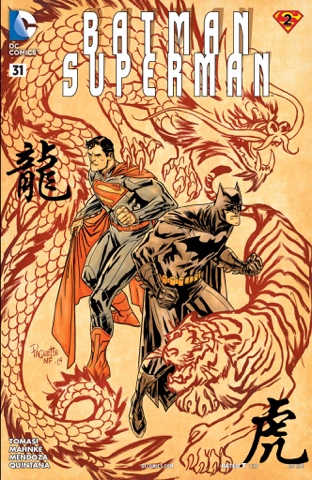 A dying Superman wants to say his goodbyes, and ensure his work carries on. So it's off to Gotham for something of a twofer - tell Batman what's up, and ask the world's greatest detective for help in finding Supergirl.
He arrives to find Batman in a scrap with a bunch of minor villains and helps out, quickly wrapping matters up because he's not got a lot of time. After a sharing session at the Batcave, Superman shoots off around the globe, and when he rejoins Batman, in New York, they're ambushed by metahuman brutes yelling a single phrase in Mandarin.
Before the fight, though, Batman reveals what he's learned about Kara... 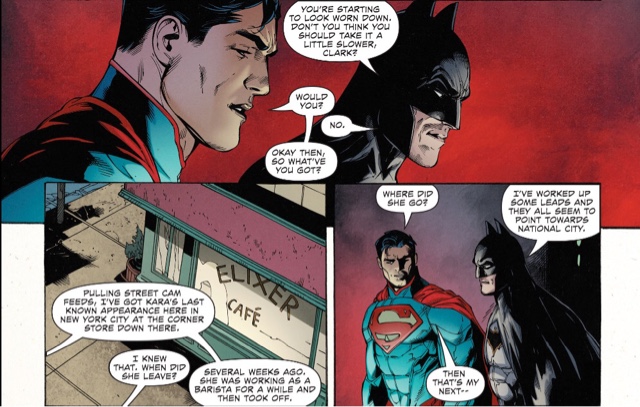 Whoa! DC Rebirth isn't here and already Supergirl's TV home enters the DC Universe. It's a nice surprise, one of many great moments in part two of Peter J Tomasi's Super-League story. One especially appreciated aspect is Superman mentioning that he's been trying to find Kara for weeks - as a fan of her latest series I was wondering what happened after her final page plot-tease, and why the heck she never showed up to help her cousin during his recent troubles. Tomasi looks to be addressing both while positioning her for the upcoming Supergirl: Rebirth special that will kick off her new series.
The action sequences this issue are big and brash and brilliant - well-choreographed, exciting and giving us something I don't think we've seen previously. 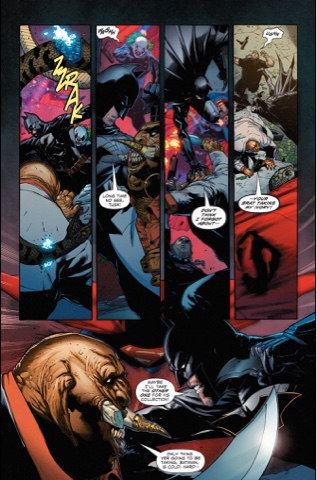 The subtle arrival of Superman on the scene, helping Batman at a speed that makes his actions difficult to gauge, works really well. The artwork comes from penciller Doug Mahnke, inker Jaime Mendoza and colourist Wil Quintana, all of whom surpass their previous A-game, from the moody opening splash of Superman zooming through Bat-shrouded skies, to this fantastic page of character and comedy. 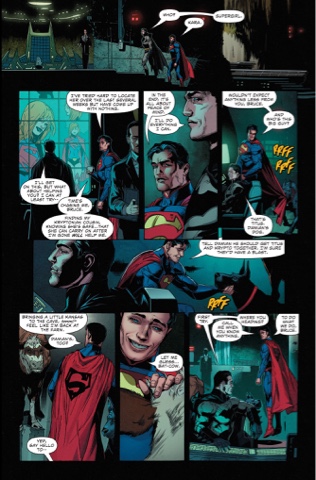 Hands down, this is my favourite Batman/Superman moment since 2011. And the page that follows, well, check it out for yourself. Tomasi gives us a Superman and Batman who have become good friends; for most of the DC New 52 period, a super-hand in a Bat-fight would've been viewed as an unwanted interruption, but here it's welcomed. 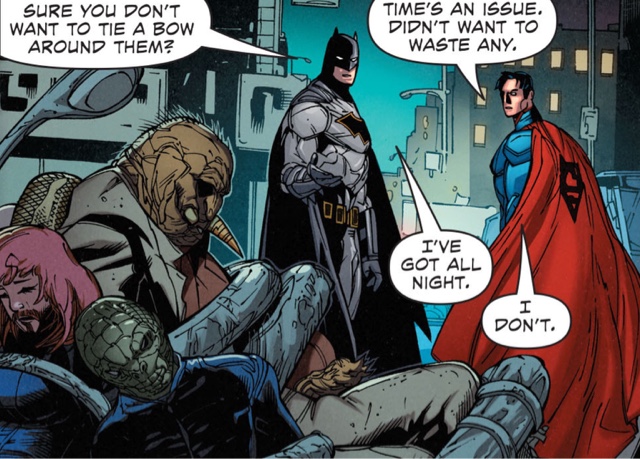 Rather than gritted teeth pouting, there's gentle needling. I hope this is the relationship that continues, however things shake out come Rebirth.
This issue also features more on the drifter zapped last issue by something that's making him think he's Superman, and a fine moment with Alfred (who looks like he may have his hand back, or at least have donned a prosthetic).
Yanick Paquette's cover is a terrific composition, nicely coloured by Nathan Fairbairn - does anyone know what the, presumably, Chinese characters spell out? Signatures? I wonder if this issue's ever-excellent letterer, Rob Leigh, would know...
Tomasi uses DC continuity - the battles with Vandal Savage, Rao and Darkseid; Supergirl's final issue; his superb run on Batman and Robin - to build his story without overwhelming the human moments. This is a tale of history, friendship and legacy, and a real treat for fans of the World's Finest team.
Batman/Superman #31 review Doug Mahnke Jaime Mendoza Nathan Fairbairn National City Peter J Tomasi Rob Leigh Supergirl Wil Quintana Yanick Paquette