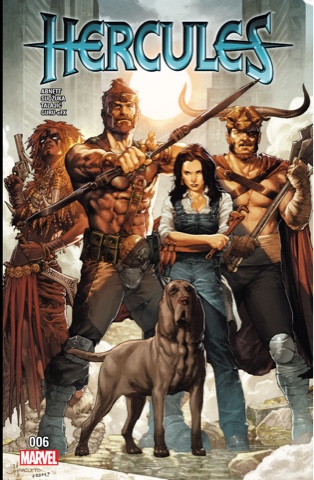 OK, apparently no one listened to me and bought this comic, and here's the final issue. There's no overt acknowledgement in the book, just a post-final page direction to an upcoming Civil War 2 mini-series, Gods of War. That book sounds promising, but heck, I want a Hercules ongoing by Dan Abnett and Luke Ross!
This issue isn't by that pairing, Ross isn't around, but fill-in/close-out artists Goran Sudžuca and Dalibor Talajić hew closely to his pleasingly clean style. They're equally good at filling the book with gods and monsters who, this time, aren't fighting so much as enjoying a bite to eat...
Hercules, his old (as in immortal) pal Gilgamesh and Stone Age goddess Ire have won a battle with a bunch of digital age gods, The Uprising Storm, who are out to usurp the older deities. They know their enemies will be back, but Hercules' friend Tiresius, a victim of the Storm, is out of hospital and tonight is for feasting as in ancient days. On landlady Sofia's Ragu. 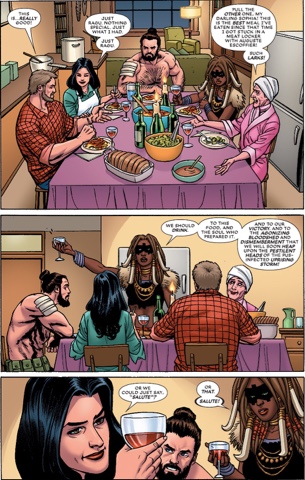 I could read about this bunch all day. There's Sophia, permanently disgruntled but generally indulgent building supervisor. Seen-it-all Oracle Tiresias and trusty mutt Alfred Lord Tennyson. Slacker demigod Gilgamesh. Ire, formidably bloodthirsty priestess. And Hercules himself, the former Avenger who's out to overturn his well-earned reputation as a carouser and remind people that he was once a true hero.
There's no slam-bang action sequence in the ironically titled 'Here's To a Long Life', but there is a fascinating encounter after Hercules texts former Avengers colleague Tony Stark who, it turns out, Abnett was born to write. 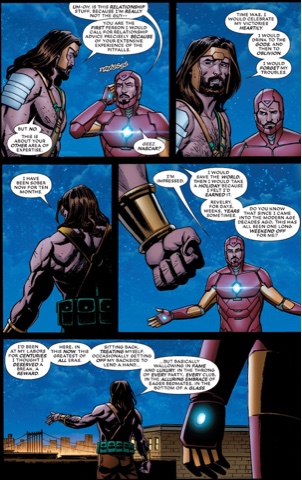 The conversation goes surprising places and I'd love to see it followed up next month. As it is, Abnett looks set to continue Hercules' emotional journey in Gods of War, if not the Uprising Storm storyline. I hope he gets back to it in some future Marvel work, because the would-be usurpers - including the marvellously named Cryptomnesia and Catastrophobia - are an interesting bunch.
You can't fail to have noticed the gorgeous cover, the work of illustrator Jay Anacleto and colour artist Romulo Fajardo Jr, and it's typical of the superb images which have fronted this series. The book may not have caught on - more due to Marvel flooding the market with relaunches and new titles than inherent quality - but don't doubt there'll be a trade, and all the cover illoes will be in there. They're wonderfully well-crafted representations of a sharp, funny series that's bound to grow in reputation as more people discover it via Marvel Unlimited. The first issue should be up next month, so if you have a subscription, check it out and get back to me!
So fare thee well, Hercules - you've certainly redeemed yourself in my eyes.
Despite the metal codpiece.
Dalibor Talajić Dan Abnett Goran Sudžuca Hercules #6 review Jay Anacleto Romulo Fajardo Jr