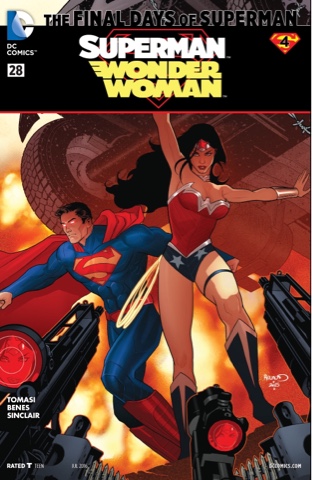 The Final Days of Superman has so far been a terrific storyline, full of well-played, meaningful moments as the Man of Steel tells family and friends he's going to die. The last chapter ended with Wonder Woman showing up, demanding to know why he'd not told her.
Well, anyone reading the last couple of months of Superman stories knows the answer - he's no longer in love with Diana. We saw the break-up and he's not give her a thought since then. Yep, we know the score. 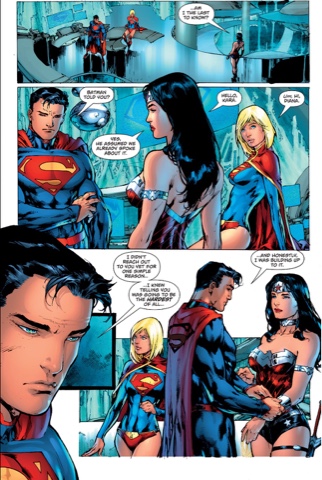 Oh.
The Final Days of Superman has so far been a terrific storyline...
... is anyone convinced by this? Anyone at all? I get that this is a joint title, so Diana deserves some play, but there are plenty of interesting ways that a story centring on a former partner telling their ex that death is coming could go. Instead, writer Peter J Tomasi ignores the emotional beats of recent issues, and has the heroes instantly a tight pair once again. It feels untrue to the characters and mars hugely what could have been another first-rate story.
The situation isn't helped by the reintroduction of Ulysses, the wet, annoying villain from Geoff Johns and John Romita Jr's disappointing Superman run. He's back because the faux Superman introduced a couple of months ago looks to be channelling Superman's solar flare power, an ability he exhausted battling Ulysses. Ulysses is at superhuman holding facility Stryker's Island, where the fake Superman is also being held. This means Superman can question Ulysses about what he may know while Wonder Woman guards the fake. Of course, both men get free... 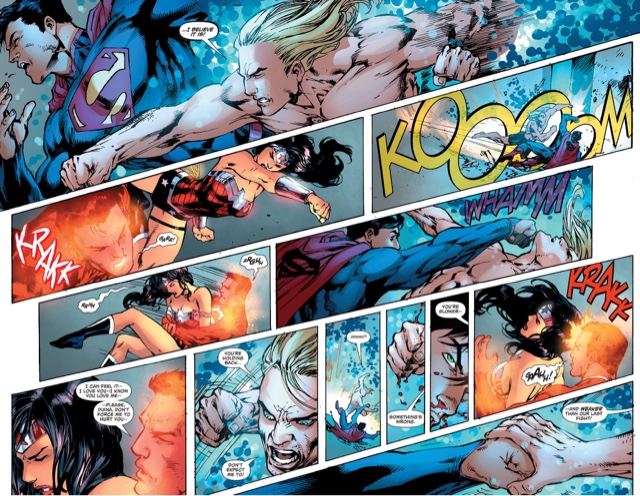 The escapes lead to a couple of pretty decent fight scenes, with artist Ed Benes giving us some really sharp back and forth action, especially in the two-page extract above - the panel shapes add pace while the compositional choices bring drama. It's not enough to elevate this issue behind disappointing, though. The relationship of the heroes has taken a backward step, and Ulysses is one more element to take space away from the promised Super-League plotline, which isn't mentioned at all this issue. Suddenly the cover has a Final Days of Superman trade dress, which is nice, but makes you wonder if this is yet another example of the Superman office changing horses mid-stream.
This issue is competent. Benes and colourist Alex Sinclair produce slick, good-looking pages and the storytelling is fine. Paul Renaud's cover is gorgeous, and digital readers get to see it without the last-minute trade dress. 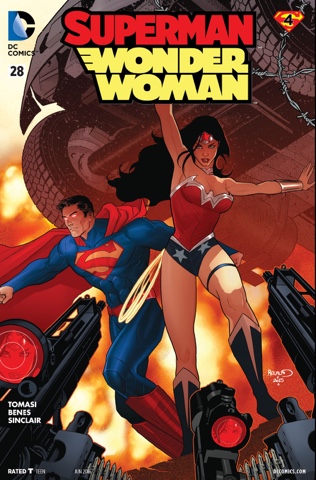 I suspect Tomasi didn't really have a Wonder Woman angle on the Superman story, so fell back on a bit of tedious kissy-kissy. Next week's Batman/Superman chapter will likely see my level of interest back up as Tomasi delivers more great work. If you've been following the current storyline, but want to save a few quid, skip this issue. Come back next week and we'll all have a much better time.
Alex Sinclair Ed Benes Paul Renaud Peter J Tomasi Superman/Wonder Woman #28 review The Final Days of Superman