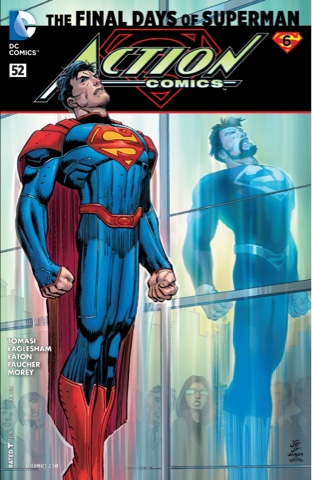 Judge this book by its cover and you'll likely throw it into the deepest pit. Whatever happened to John Romita Jr? His work since coming to DC has been getting odder and odder, his Superman so blocky he's almost ready for a Lego movie. A terrific tease - the first meeting between New 52 and post-Crisis Superman - doesn't get the image it deserves under Romita, inker Klaus Janson and blameless colourist Dean White. (And why are the shield symbols on P-C Superman reversed? He's on the other side of a window, not trapped in a mirror?) 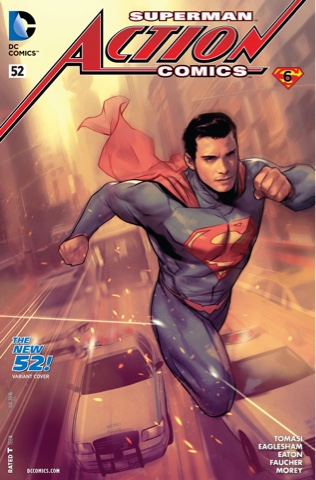 The New 52 variant cover by Ben Oliver is much more nicely rendered, a homage to this series' first issue as we bid farewell to the current numbering.
Inside, things are a lot better. It's true, the first page with New 52 Superman ruminating on the love between him and Diana churns my breakfast porridge, but I just have to get over it and move on; that's the set-up for this story and better things lie ahead. This week's chapter of The Final Days of Superman has the pair, and best pal Batman, flying back to the US after their trip to China.  They'd hoped to find the confused energy double of Superman who killed several Daily Planet guards, but the mission proved a red herring. Batman, though, can trace the doppelgänger through his energy pattern, the mystery man having absorbed Superman's solar flare energy along with his memories.
As they proceed, Superman is having an attack - tests say he's not got long to live, and recent exertions seem to be bringing the end closer. And flying, when he could be sitting in the Batplane, isn't the brightest move. 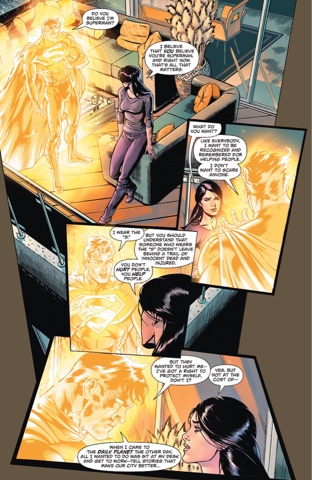 Over in Metropolis, Pseudo-Superman has showed up at Lois Lane's apartment. She knows he's unstable, as likely to kill her as kiss her, but doesn't try to play along with his delusions - she tackles them head on like the ace reporter she is.
And it's rather heartening that Lois is the only one he feels he can trust. The strange visitor has something he wants Lois to see, somewhere he wants her to go... 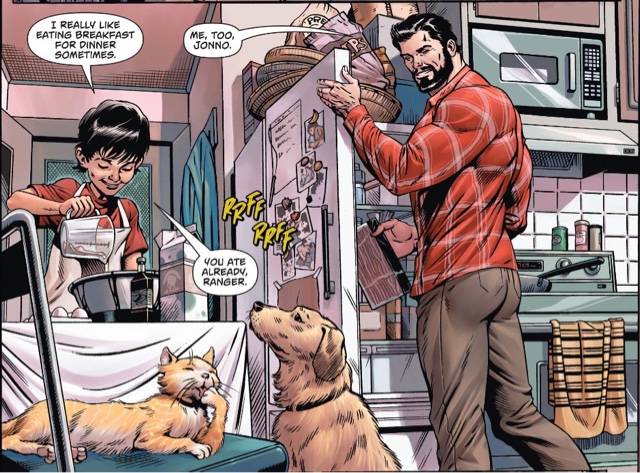 In Salinas, California, at the family farm, post-Crisis Superman and son Jon are making supper, ready for their Lois to arrive home. But someone else arrives first - Pseudo-Superman and other Lois. Even though New 52 Superman doesn't know of the older version of him from another Earth, the energy double has managed to tune into him. And his bid to take over New 52 Clark's life at the Daily Planet having been a disaster, he's ready to kill the bearded Clark and steal his family.
P-C Superman, of course, isn't having that, and merry hell breaks loose, just before more people arrive - his own Lois, and the Trinity of this Earth...
Phew. I liked this issue loads, from the friendship between Superman, Batman and Wonder Woman to the sweetness of Clark and Jon cooking together. New 52 Lois is exactly the character I want her to be, smart and brave; I especially like how when Pseudo-Superman 'suggests' they sit down and eat with Clark and Jon, she slots into an unspoken 'keep things calm, keep the boy safe' agreement with this Clark who isn't her Clark. And when things really kick off, she takes on the role of Jon's protector as quickly as would her sister-Lois.
Writer Peter J Tomasi's dialogue for each character is spot-on, with the relationships between the various characters dictating the action. There's a little bit of apparent selfishness on Diana's part...

... but that's there to intrigue us - he's been to Lois, Lana and Kara, who is he visiting next? Jimmy and Perry? Kon-El? Lori Lemaris? Maybe we'll find out next time, as the story goes into Superman/Wonder Woman #29. Until then I could spend the week poring over and purring at the artwork, the result of two teams.
Or rather, one and a half - while Scot Eaton is inked by Wayne Faucher, Dale Eaglesham finishes his own linework, and every page is a treat. Until all parties come together, I think it's Eaton and Faucher giving us Superman, Batman and Wonder Woman, and Eaglesham handling the Metropolis and Salinas sequences. I'm going by decor as much as anything else (such as angled panels) here - Eaglesham has shown, in the suburbia-set Secret Six, that he's splendid at drawing domesticity, and such things as Lois's terrace and Clark's kitchen scream Eaglesham. Look at the thought put into this panel, the placement of the three characters, the body language, the socks for goodness' sake... it's a testament to Eaglesham's - or Eaton's, as I say, I'm not certain about who's drawing what - craft.

Plus, Eaton does an especially gorgeous Wonder Woman, and I think I'm seeing her here.
Corrections and better theories welcome!
The talkie scenes on the Batplane, the tension at Lois's apartment, the more physical drama of the farmhouse fight - it's an exemplary performance from all the artists. And how about this for a way to convey super-hearing, I've never seen this previously. Clever. 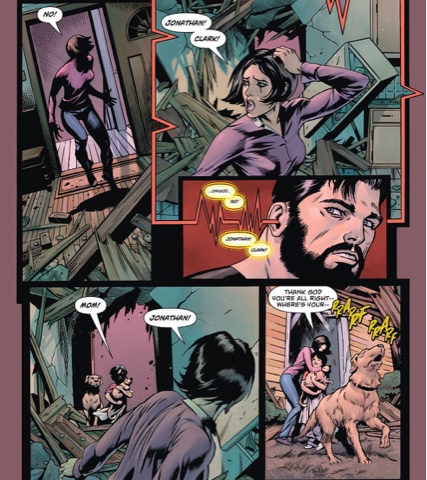 Then there's the way Jon and Ranger (who needs to team up with Krypto) are drawn in the following panel, tiny and vulnerable. It's just really good stripwork. 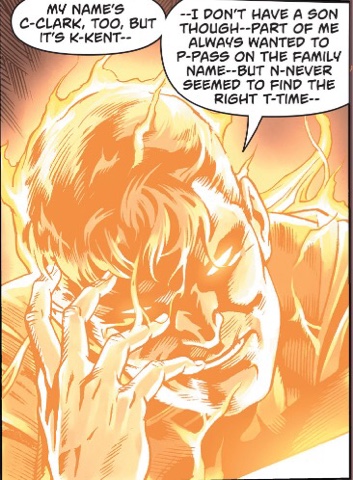 And colourist Tomeu Morey deserves an extra nod for his work on pseudo-Superman, just look at how he conveys the energy with his yellow blends - if someone at Marvel isn't looking at this work and thinking. 'Human Torch', they're missing a trick.

As for letterer Rob Leigh, he's as quietly key as ever, I love his wobbly font for sick Superman.
With just a few issues to go of this storyline, this is as perfect a second act as I could wish for, bringing the key players together and promising a big finish. Just where everyone will end I up, I don't know, but as fun rides go, this has even the Batplane beat.
Action Comics #52 review Dale Eaglesham Peter J Tomasi Rob Leigh Scot Eaton The Final Days of Superman Tomeu Morey Wayne Faucher