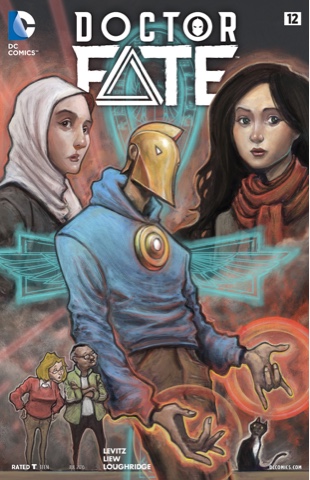 Trouble is relative. New Dr Fate Khalid Nassour has died, come back to life and saved the world, but this is the scariest day of his life - he's about to be thrown out of medical school for his continual absences. We know he's not had a choice - when you've been drafted into a war between ancient Egyptian deities, making the 11am lecture isn't always an option. But now things have calmed down on the other-dimensional planes it's time for Khalid to face the problems of his everyday life, chief among them a very stern dean.
Khalid's day of judgment, though, is interrupted by irony. 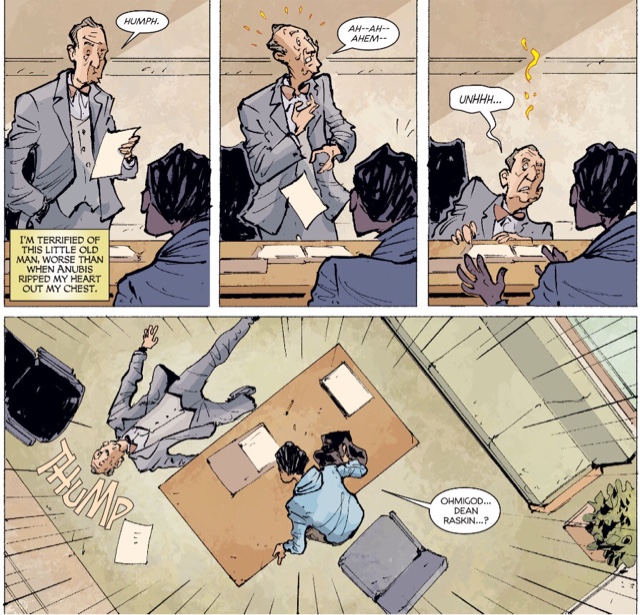 Can Khalid ally his nascent medical training with his newfound magical skills and save the Dean.... so he can expel him. Even if he wins, he loses, but Khalid is a good man, and a hero - he'll go to hell and back if it means the Dean has a chance at life.
This has been a lovely series. Past tense, because it's ending as the DC Rebirth wave sweeps away the more experimental DC You books, the quirky titles that arrived in the wake of the revamped Batgirl's critical success. Dr Fate simply hasn't found a big enough audience. Maybe it's because it didn't get enough promotion from DC, but kudos to the company for keeping the faith and giving us a year's worth of issues. Possibly it's because writer Paul Levitz and artist Sonny Liew's opening storyline of a world threatened by a vengeful god's flood went on rather too long. Certainly, the A plot could have been tightened up, but I really enjoyed its mingling of the epic, the esoteric and the everyday, with Khalid's family and friends getting as much of the spotlight as the likes of antagonist Anubis and cat god Bastet.
Getting to know Khalid's parents Mohammed and Elizabeth has been a real pleasure, I can't remember the last time we had a mixed culture family in superhero comics (I'm not counting Lois and Clark here!). Some people had a pop at this comic, claiming it was jumping on the Ms Marvel bandwagon by including characters who followed Islam, but if it did take a cue from that series, why is that a negative? Comics should be reflecting society, and a character concept linked for decades to a non-Christian pantheon seems a logical place for the diverse cast all books should be giving us.
New York lifer Levitz has put his heart and soul into making this book something different while honouring DC history, and hasn't gotten the credit he deserves. I'd love DC to have a digital blowout sale of this series - heck, all the DC You titles - offering the lot for $10 or something. That would persuade more people to try this series, because it really benefits from a binge read. 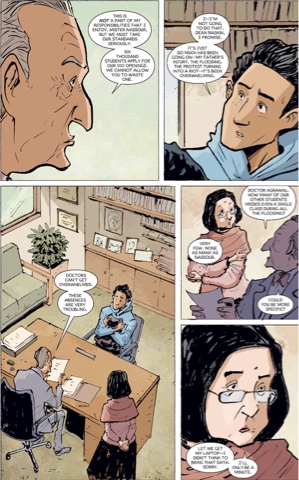 That way more folk would also discover the characterful stylings of Sonny Liew, whose distinctive work has served Dr Fate so well. There's a lovely naturalism to Liew's cartooning - such as Khalid's nervous posture in the Dean's office - that ensures his flights of fancy have all the more impact. I'll remember his work on this series for a long time, especially last issue's Asterix-tinged encounter with the ghost of Julius Caesar. The run's covers have showed another side to Liew's talents, showcasing his skill with a more painterly style, and this issue's is another winner. 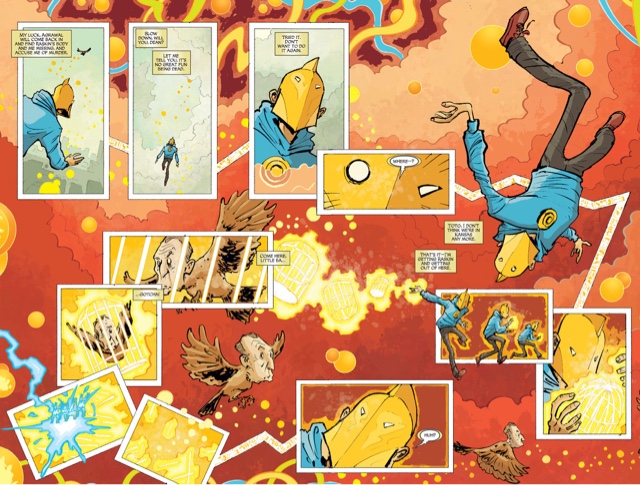 The colouring of Lee Loughridge has also been a big plus, ensuring New York really does look like, as early Marvel Comics had it, 'the world outside your window' (well, if you lived in New York). And Loughridge looks to be having immense fun when we're in mystic territory.
Saida Temofonte's lettering is the calm in the storm, laying out Levitz's assured script with real elegance.
This issue ends with Khalid being reunited with his great-uncle, and I'm chuffed we're getting a thirteenth issue as Khalid's relative is a bit of a favourite of mine; then again, said favourite could be showing up to end Khalid's tenure as Dr Fate. I do hope not, he's earned an extended shot at the role.
If you've never tried this series, give this issue a try. So what if it's late in the day, if you like it, the other issues are all out there to be discovered. Enjoy those twists of Fate.
Dr Fate #12 review Lee Loughridge Paul Levitz Saida Temofonte Sonny Liew