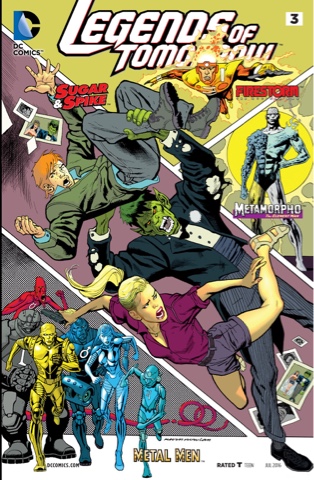 Now here's a treat, the third issue of DC's 80pp giant collection of mini-series only a couple of weeks since the last one. I suppose the publisher wants to clear the decks for all the DC Rebirth titles; whatever the case, I'm delighted because this anthology book, with its mix of old characters and new approaches, is proving a huge treat. And the first delight is the beautiful cover from Kevin Nowlan - he even gets in a wee reference to the first, and only, appearance of the baddie Sugar & Spike face. 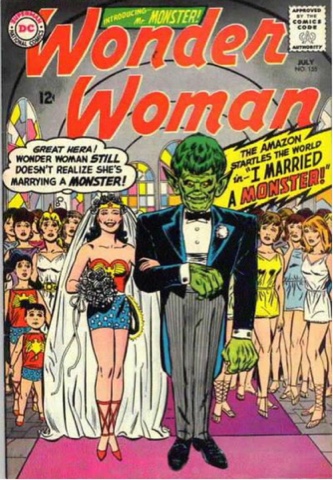 For the first time I didn't read these strips in the order of appearance. No, much as I love Firestorm, I've flat out adored the first couple of strips featuring Silver Age toddlers Sugar & Spike as adult investigators, helping superheroes cover up their more embarrassing moments. This time it's Wonder Woman, who onetime almost married an alien - OK, it was a different Earth, a whole other continuity, but the heck with that, for the purposes of our story, it happened.
And now Diana's otherworldly fiancé is back, ready to cash in on their brief, weird encounter on national TV. It's up to pals turned partners Sugar Plumm and Spike Wilson to track down Mr Monster - in his Earth guise of Bradley Whitmore - and persuade him to back off. When they find him, though, he's cocky and unrepentant - and far from alone. 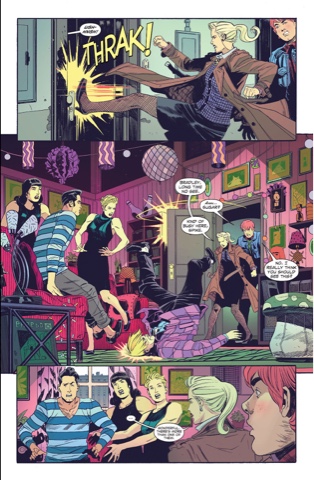 Now, this page confuses me: Bilquis Evely is one of my favourite new artists, veteran Keith Giffen is among my all-time comic heroes - but something's gone wrong here. Spike speaks as if he's seeing something Sugar won't, even though the aliens are right in front of them both. And why are the aliens, who outnumber and out-size our heroes, quite so sheepish? 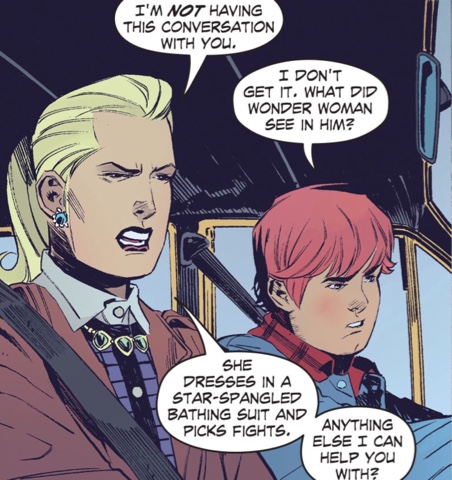 The big sticking point, though, is Sugar's behaviour. She's been pretty snarky to Spike in previous issues, but not unbearably so; here, she's vile to everyone. Even Wonder Woman. Given the story is called Sugar's Bad Day, there's a point to it, and we eventually learn it's her birthday, and that something rotten once occurred this day involving Spike. But we don't find out what, and by this time I just want someone to tell her to shut the hell up.
I wonder where Giffen is going with this, I hope he cheers her up soon because crabby as young Sugar was, she was fun - this gal is near certifiable. Why a sweet guy like Spike is putting up with being treated like a particularly unloved doormat... it must be love.
And can we please see how Bernie the Brain, mentioned in the first issue, grew up? I don't doubt Evely has an adorable design to hand. She gets extra points this time for a great homage to Sixties Wonder Woman artist Ross Andru's creature design (think a green Jerry Lewis). 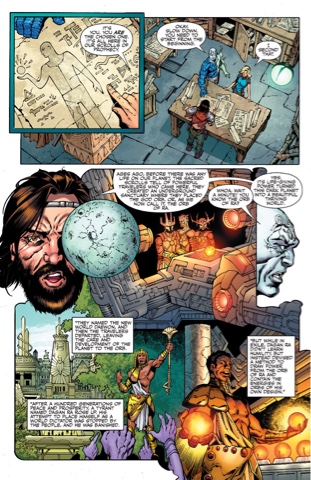 Metamorpho gets very info-dumpy this time, as he and Sapphire travel from an Egyptian tomb to another world and learn the secret of his powers. Revealing all is a freedom-fighting techno-barbarian who persuades Rex to join their crusade; he is, after all, the Chosen One. Sapphire's a bit dubious about the whole thing, but trusts his instincts.
Having grown up in the Seventies heyday of the likes of Roy Thomas, Steve Gerber and Don McGregor, I can handle huge wads of dialogue. I understand newer readers have problems, the lazy tykes, but this is hardly a book for the young 'uns. I really enjoyed hearing the secret history - allegedly - of Earth, and smiled when an obscure villain from the superb Nineties L.E.G.I.O.N. series was worked in.
Writer/artist Aaron Lopresti, partnered with inker Jonathan Glapion, gives us plenty of action along with the talk, with techno-barbarians and monsters galore. My favourite moment, though, is a wee character insight.

Bless.
Firestorm is the proverbial game of two halves, but don't expect to find said halves in the obvious order - writer Gerry Conway flashes back and forward by a few minutes here, and a few minutes there, again and again. The time codes are right there, but I got terribly confused as we moved between the new Firestorm combo of Martin Stein and Ronnie Raymond learning to work together, Stein revealing his history with Multiplex and Major Force attacking our hotheaded hero. Especially when different timezones are added to the miss - editor Jessica Chen makes a joke of it, but she's not wrong.

I don't really see what the point is, the story didn't need a gimmick - the constituent parts are really well done, with Ronnie's rather drastic lesson in trust issues, for instance, a model of comic book craftsmanship. 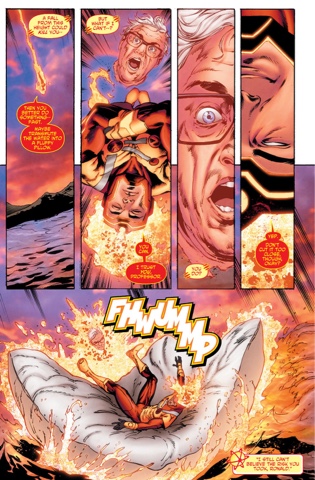 Eduardo Pansica and Gerry Conway are of different generations but they've quickly developed just the synergy Martin and Ronnie need. I've everything crossed for Firestorm to be spun off into a separate book, with this creative team attached. Pansica's dynamic compositions, inked by Rob Hunter and coloured by Andrew Dalhouse, blaze off the page, while Conway's back and forth dialogue, honed by his years in TV, fair sizzles. And how great that we're getting old school transmutations of the comfy sort.
For the first time, the Metal Men take the award for most fun feature, and it's not just down to Firestorm the Non-Linear Man. Their amusement park battle with a corrupted Red Tornado has all the team-up transformations I could ask for, along with a classic bit of Platinum flirting. 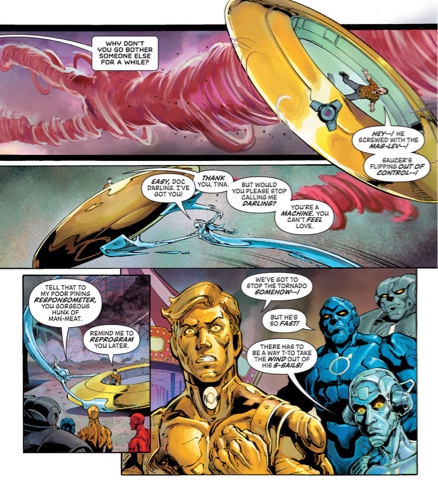 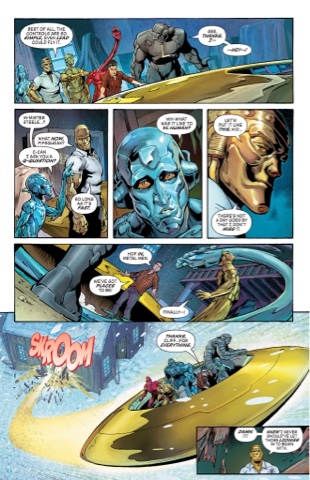 As well as being there to bounce off, Cliff provides transport for the Metal Men, with a nice callback to their Sixties flying saucer. The no-nonsense nobility of the team, the overprotectiveness of Doc Magnus, the use of science to win the day - it all goes right back to the Silver Age but feels fresh because creators Bob Kanigher and Ross Andru (that guy again!) got it right first time. Now, if only we could get the iconic bodies back - next issue's title, 'Everything old is new again', brings me hope. 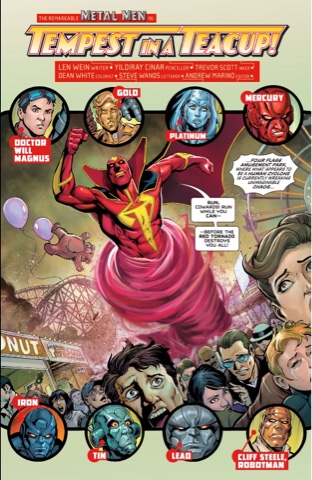 A bonus here is the new special effects for Red Tornado, courtesy of Cinar and colour artist Dean White... it actually makes me want to see more of the whiny windbag.
As well as a cracking title design, letterer Steve Wands deserves credit for using different colour fonts to indicate when the true Tornado is talking, and when it's infernal hacker Nameless. I'd like to see something similar applied to the Firestorm strip, rather than the garish coloured balloons currently being used.
So, just a few more issues to go, and I fully expect this giant-sized feelgood fest to vanish. Meanwhile, I'm devouring these consistently good, occasionally excellent strips. Never mind tomorrow, these heroes are already legends.
Aaron Lopresti Bilquis Evely Eduardo Pansica Firestorm Gerry Conway Keith Giffen Legends of Tomorrow #3 Len Wein Metal Men Metamorpho Sugar and Spike Yildiray Cinar