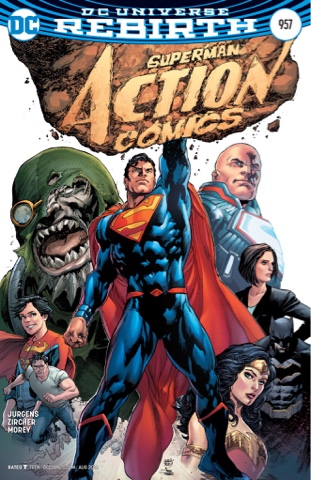 In Metropolis, Special Crimes Unit boss Maggie Sawyer and Daily Planet photographer Jimmy Olsen are at the scene of a siege. No one knows what the masked men want, but a familiar symbol heralds their capture.

It's Lex Luthor, announcing himself as replacement for the recently killed Superman - an apparently noble idea, but he can't resist having a pop at the hero he only ever saw a stinking alien. 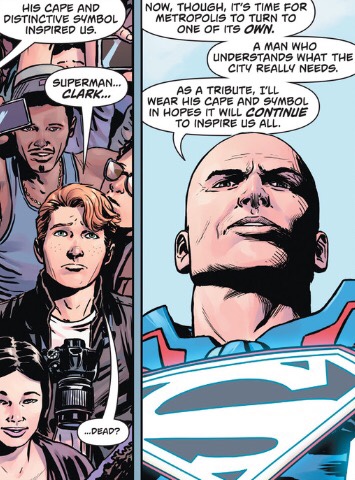 Across the nation, as they prepare to move home after having their location discovered by Intergang, Clark, Lois and Jon White watch the scene on TV and Clark's reaction is instantaneous. 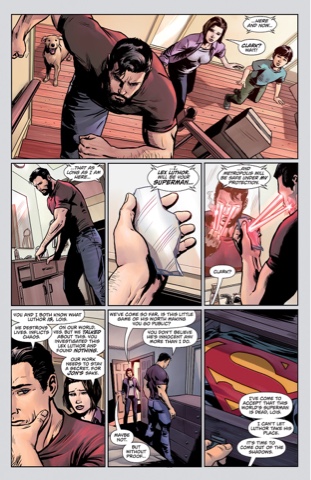 He rushes to Metropolis and challenges the man he knows has to be a villain. A fight starts and Jimmy decides he's not able to cover it - a trained reporter is needed. And one shows up. 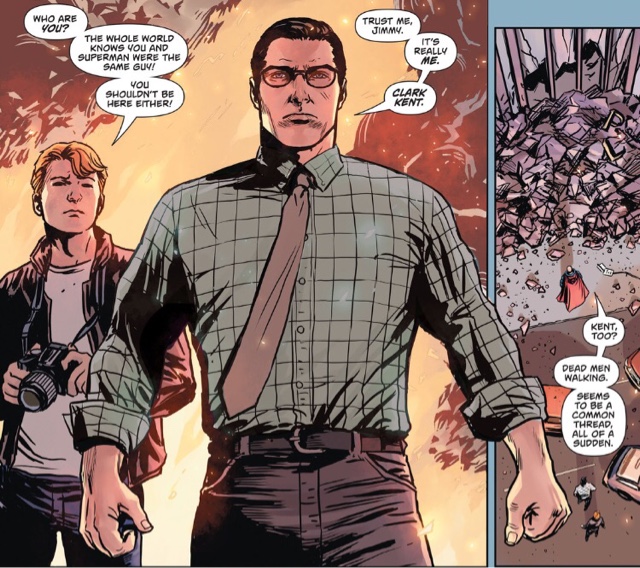 And high above the city, another supposedly gone figure awakes...
Whew! Dan Jurgens doesn't let the grass grow under this script. I was expecting months of Luthor pretending to be a good guy, winning over Metropolis, before the pre-Flashpoint Superman confronts him. Having read the solicitations, I was expecting hints of a second Clark Kent before he emerged from the shadows.
But no, it's all here in a pitch-perfect script, one that's beautifully realised by artist Patrick Zircher. The character voices are spot on, with Clark and Lois's evolution into Jonathan and Martha Kent when it comes to giving their newly Super son advice lovely to see. 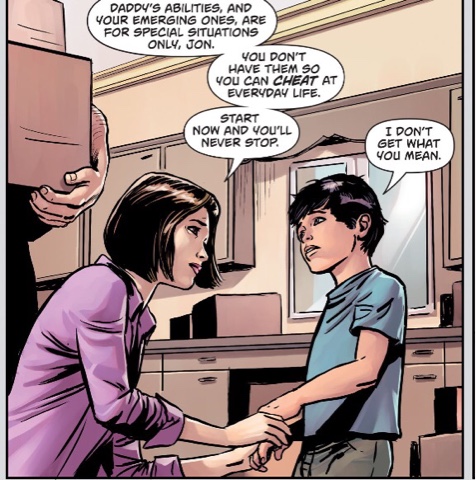 And I love that Jurgens doesn't pretend we haven't all realised the current and coming Superman Family books are nodding to the Nineties Reign of the Supermen sequence.
The shaving scene, meanwhile, is a direct lift from the Silver and Bronze Ages, Kryptonian rocket ship screen and all.
So I guess Lex, with his super-suit, gets to fill the Steel role.
And how brilliant to see Maggie Sawyer back in the daylight of Metropolis after her decades-long sojourn to Gotham.
Zircher's a hugely underrated talent and hopefully his work on this launch will make people realise what a gift he is to comics. The compositions are thoughtful - look at the silhouetted  camera phones, that says so much about today's society. The facial expressions are marvellously nuanced - Lex hasn't looked so determinedly Lex in years. The bits of extra business really add stuff - the White family's dog, watching the excitement. 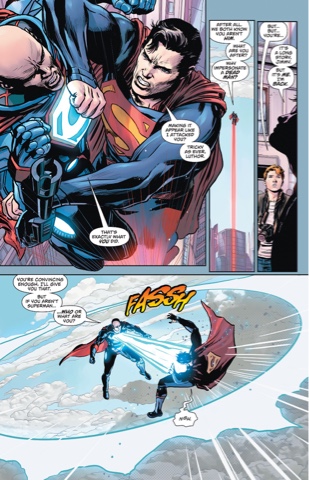 And this being a superhero book, great action sequences are key, and Zircher delivers - it's novel to see Superman get up close with a for, but Zircher makes it work.
The colours of Tomeu Morey complement script and art perfectly, with Morey helping Zircher nail the big moment when New Old Superman flies off to Metropolis. He looks ridiculously heroic (mind, why he's wearing a version of New 52 Superman's costume, I have no idea - trunks please!). Rob Leigh, a stalwart of the Superman line for years, is still around and I'm happy with that, he's a fine letterer with an especially nice line in title fonts. 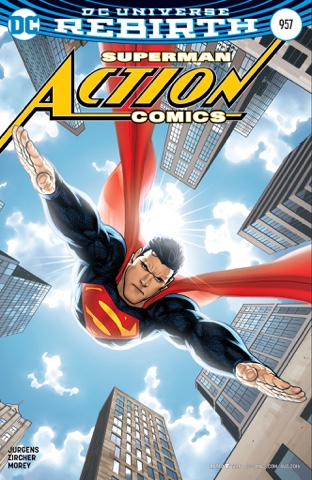 I'm disappointed not to see a Zircher/Morey cover - the main image by Ivan Reis, Joe Prado and Sonia Oback is great, and the variant by Ryan Sook a dream, but come on, we have premier artists inside the book too
Mysteries, humanity, action ... a little humour and we'd have the perfect Superman comic. As it is, we have a hugely enjoyable, terrifically illustrated beginning to a new era - and the return to the original Action Comics numbering system is the icing on the cake. Superman really is back.
Action Comics #957 review AJE Prado Dan Jurgens Ivan Reis Patrick Zircher Rob Leigh Ryan Sook Sonia Oback Tomeu Morey