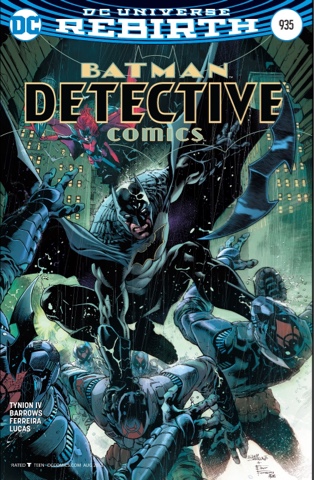 Bat Boot Camp is underway and just look at that training room. 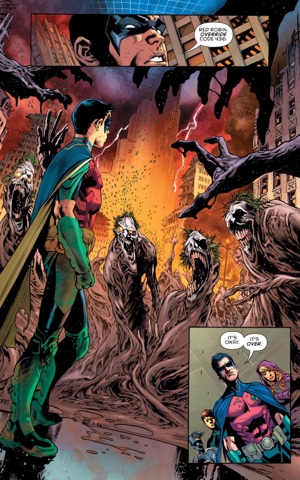 Who needs holograms when you have Clayface plugged into what passes in Gotham for a PlayStation? After three hours this danger room really is endangering the players, and Red Robin Tim Drake has had enough. He wonders why he, Spoiler, Orphan and indeed, reforming villain Clayface, can't just get out in the streets as they have so many times before. Batwoman reminds Tim that an enemy is out there, targeting vigilantes for assassination - as drill sergeant in Batman's nascent Bat-Army she needs to see their individual skills in order to mould them into a unit.
Class dismissed.
And that's when this issue gets really good, with beautifully written and drawn scenes between Tim and Batman, Tim and Spoiler Stephanie Brown, and Batwoman Kate Kane and her military man father. Orphan Cassandra Caine and Clayface Basil Karlo get less page space, but lovely moments nonetheless. Basil, in particular, continues to touch my heart.
The cliffhanger goes to Batman but to be honest, he's the least interesting aspect of this issue. That's not to say he's uninteresting - the aforementioned encounter with Tim is a great bit of relationship and status rebuilding - but it's James Tynion IV's work with the other characters that really has me excited. As for the main plot, concerning a conspiracy involving 'The Colony', we've not seen enough yet to judge; I suspect I'd be happy were this book to be 'simply' a series of vignettes with the training squad, the dynamics are that much fun. A decent overarching plot would be the icing on the cake.
Bringing Tynion's well-wrought script to life is Eddy Barrows and his compositions are spectacular, leaps and bounds above the good-looking work he's been doing for DC for a decade or more. I think he likes Gotham, and I hope he stays there, working with inker Eber Ferreira and colourist Adriano Lucas. Every character, every setting, convinces, fascinates. Occasionally, usually at the end of a scene, the artists soften the image, to gorgeous effect. 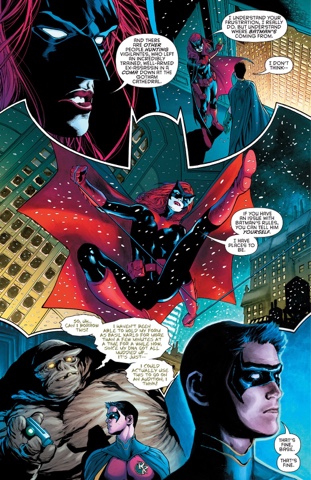 Penciller, inker and colourist also supply the regular cover, while the poster-worthy variant is by Rafael Albuquerque on inspired form. 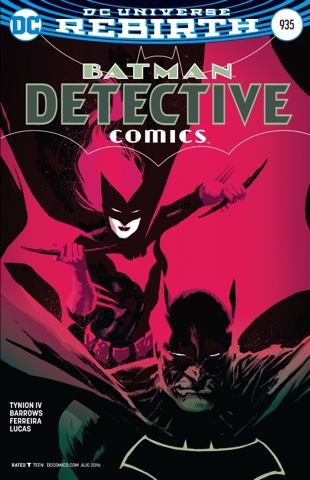 There's only one tiny, tiny thing I'd get rid of... 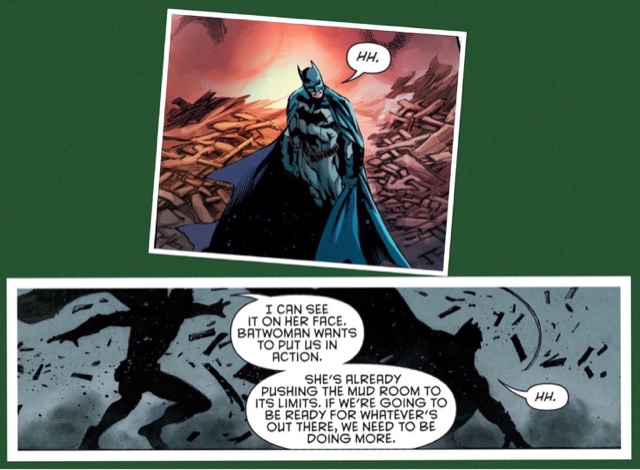 That's a moment from last issue, and one from this week's. I think it was Grant Morrison who came up with that Bat-noise. 'HH'... what the heck does it sound like? What does it mean? And will it show up again next time? I know I'll be here to find out.
Adriano Lucas Detective Comics #935 review Eber Ferreira Eddy Barrows James Tynion IV Marilyn Patrizio Rafael Alburquerqe