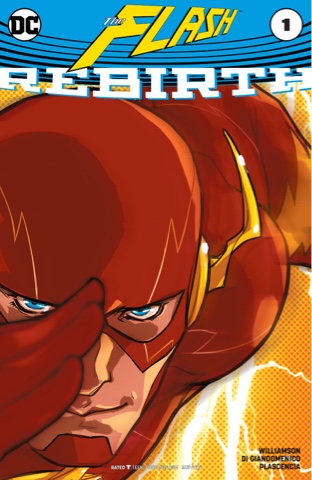 There's been a murder. A woman in the Central City suburbs is dead and her husband is in the frame. It's all too familiar to police scientist Barry Allen, whose own dad sat in jail for years, framed for the killing of his wife Norah, Barry's mother.
Barry finds it hard to to concentrate on the case, he's having visions. And then Wally West returns after years trapped in the Speed Force following the Flashpoint. Barry remembers Wally and wants to tell his Aunt Iris, but the younger Flash isn't having it. 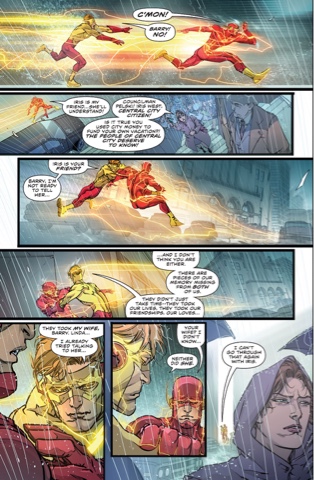 With Barry appraised of the full Flashpoint debacle, and the finger of blame pointed at someone other than Barry, the two heroes split up; Wally to see what his old friends in the Teen Titans know, Barry to see if Batman is already on the case.
He is, and I can't imagine Dr Manhattan - if he is indeed behind the changed DC Earth - being able to hide from Batman and the Flash, superhero scientists supreme, for long.
A few weeks ago, DC Rebirth brought back Wally West. And this issue brought back Barry Allen. He's not been away technically, but emotionally, that's another matter. This issue felt like my Barry, the guy I grew up reading - not the calamity-prone bozo of recent years, but the surefooted speedster who used science in his crime-solving.
The writer behind this issue is Joshua Williamson, coming to DC after capturing attention with the likes of indie books Nailbiter and Ghosted. I hope he sticks around the DCU awhile, because he writes like a native. Barry's narration is deftly done, the new reader-friendly exposition nicely worked into the issue. The moments we've encountered in Rebirth are fresh as seen from Barry's point of view, and the set-up for the coming biweekly Flash series grabs me (mind, I really hope it's not that villain yet again...). 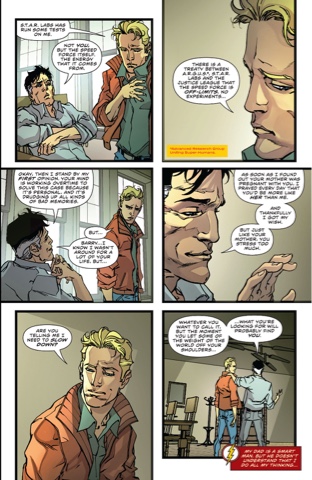 I've three favourite scenes - Barry's chat with Henry Allen has a genuine father/son feeling, his stillness and thoughts while Batman analyses a certain smiley badge are telling and the spread showing his temporary parting from Wally... reader, i think I had something in my eye. And throat.
Williamson's words on this splash are quietly powerful, while artist Carmine Di Giandomenico, formerly of X-Factor, gives us a fantastic composition. I'll leave you to discover it for yourself, but Di Giandomenico captures character and speed beautifully. Ivan Plascencia's colours help set the mood in fine style - it looks like Di Giandomenico is leaving the art pretty open for Plascencia to finish; however the partnership works, it definitely works... there's a bit of a Scott Kolins vibe, which sits well with me. I do wonder, though, why they'd make a sinister hand shadow look like a duck...

Steve Wands' slightly offbeat font complements the rest of the issue's art, while Karl Kerschl's cover is eye-catching with its intensity and Benday dots homage. 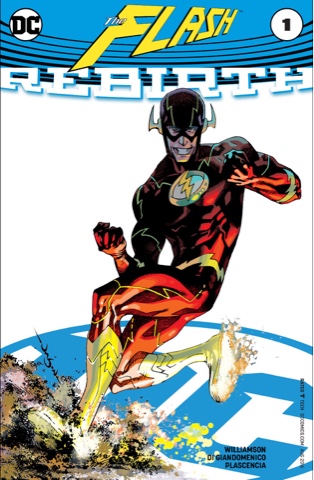 Jason Pearson's variant is eye-catching for different reasons, it's a tad too Blackest Night for my tastes, though I love the dust effect. Back inside the issue there's a nice Easter egg nodding to classic Barry Allen artist Carmine Infantino, a Flash fact, a reference to Barry's lateness - this really is a treat for longtime fans, and I can't imagine newer readers not loving this book too.
Carmine Di Giandomenico DC Rebirth Flash: Rebirth #1 review Ivan Plascencia Jason Pearson Joshua Williamson Karl Kerschl Steve Wands