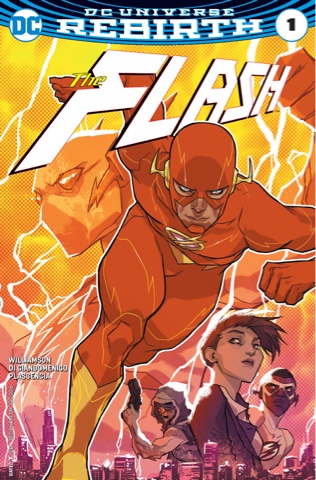 Barry Allen and police officer pal August Heart are in the crime lab, talking about a very personal case - not the murder of Barry's mother but the killing of August's brother. The police scientist has agreed to take a new look at evidence in the case, and August leaves, relieved. Then something else arrives - a devastating lightning bolt that hits a cabinet, soaking Barry in an electrified cocktail of chemicals. You know what happens next...
Fast forward to today, where Barry, as the Flash, attends the aftermath of a tornado hit. He offers to rebuild homes at superspeed but is met with a response unique in the history of superhero comics. 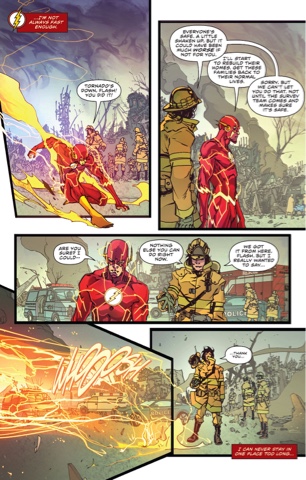 Next, it's off to a crime scene, where Barry's police scientist skills are needed. Director Singh is a tad hard on him, but August defends him. Another colleague is less OK with Barry's distracted ways. 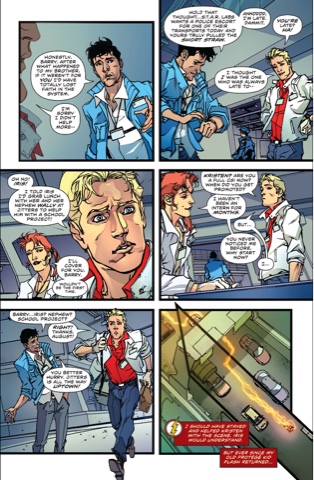 Then, it's time for coffee with Iris and her nephew Wally, where Barry wrecks what could be a fun lunch with his guilt at not being able to do enough for victims of crime, even though he's already overworked as a CSI. Iris has advice, and Wally has insight. 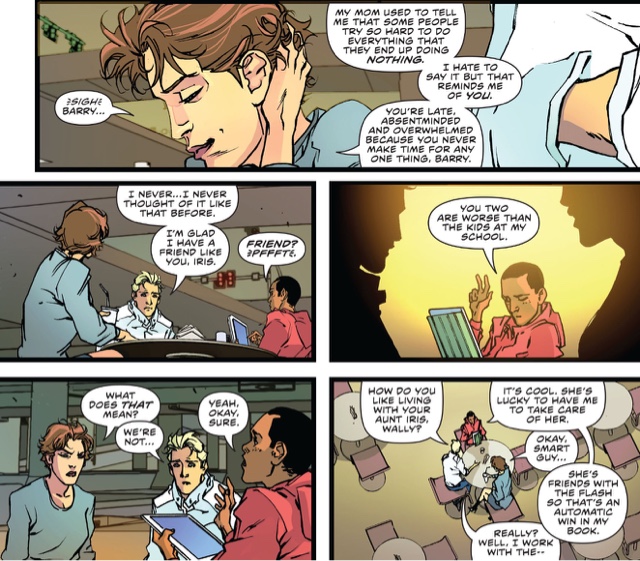 When two emergencies come up, Barry makes his excuses and deals first with a fire, then heads to the scene of an attack on a STAR Labs transport vehicle. August is already there, and in big danger.

What ultimately happens is cliffhanger territory, so I'll leave that for now. Instead I'll say that I'm hugely impressed with how quickly the new core creative team of Joshua Williamson and Carmine Di Giandomenico are gelling in this book. Williamson's assured script gives us a nice Day in the Life of Barry Allen, showing us the state of his known relationships and introducing others. The Rebirth plotline is set aside for the Titans book, allowing Barry to concentrate on smaller scale crimes... mind, smaller scale than a rewriting of reality leaves a lot of scope for spectacle.
And that's what we get from Di Giandomenico and colourist Ivan Plascencia - the scenes of Barry running burn off the page, with artfully angled panels directing us forward with the Flash in the tradition of legendary artist Carmine Infantino's stretching hands.
The characters look terrific, and the little touches, such as Barry raising crime scene tape and the way one page visually echoes another, add to the reading experience. 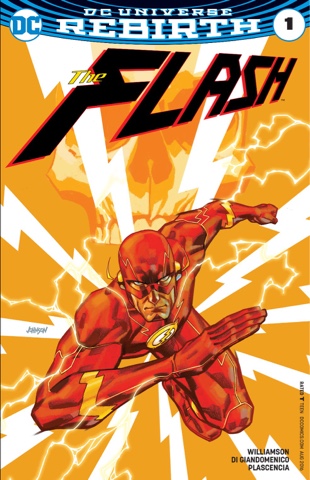 The covers, by Karl Kerschl, and Dave Johnson, are cracking, though it's a shame both have bright yellow backgrounds, making them feel samier than they are.
I don't know what happened to Barry's girlfriend Patty Spivot, but as she was a bit of a shrew in the New 52 run, I'm happy for her to take a break. This leaves more room for Iris whom Barry, it seems, hasn't yet remembered was his wife before someone rewrote his world. Wally's an appealing soul, being bright - and fast - enough to complete his school project without Barry's help, and trying to make the adults admit their attraction. I like the wonderfully named August Heart, and Kristen could be interesting - please though, no love rivalry with Iris, just let her be a mildly irked colleague ripe for non-soppy plotline roles.
The only thing I'm not keen on about this issue is Barry's weight of the world bit - cheer up chuckles, yeah, you can't save everybody, but that's a lesson learned early on by medics, emergency workers and other superheroes. Be glad you're making the big difference you are.
(And yes, I'm addressing a comic book character but remember, we're on Earth Prime, Barry may be watching us via interdimensional crystal ball...)
This is what a DC fortnightly comic should be - just like a good monthly! Fast-moving and packed with incident, no padding. Decompression had its day, let's keep it at bay.
Carmine Di Giandomenico Dave Johnson DC Rebirth Ivan Plascencia Josh Williamson Karl Kerschl The Flash #1 review