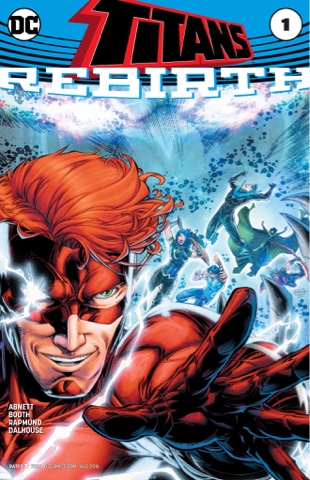 The big mystery of the DC Rebirth 80pp Giant was: who changed the past of the heroes of the DC Universe? After escaping the Speed Force, Wally West is determined to find out, but he can't do it alone. Having been reunited with Barry Allen, he seeks out his old friends in the Teen Titans.
It's not the easiest of reunions, but one by one, as they touch him, the Speed Force restores their memories of Wally, of what they meant to one another. 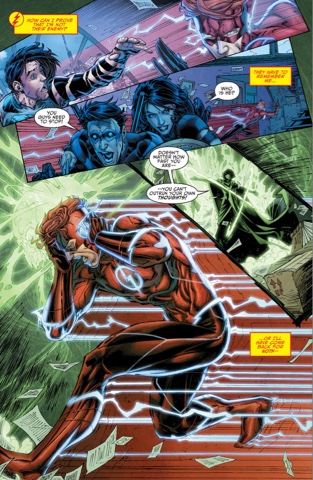 Dick, Donna, Garth, Lilith and Roy are overjoyed to be back with Wally - the 'something missing' they all felt in their recent Titans Hunt adventure - but very, very confused.
Still, they're Titans. They'll figure out what's going on - together.
As a prologue to the new Teen Titans series, this does the job in fine style - Wally meets his old friends, memories return and a resolution is made. But if you're short of cash, I'd wager it's eminently skippable - it's pretty much how I expected things to roll before the main action. There's a telling moment in a flashback nodding to Roy's difficult relationship with his mentor, a sweet bit with Lilith, but nothing of huge note.
The real fun from writer Dan Abnett will come in the new series; will Dick cede his traditional leadership role to Wally, who knows more about this 'operation'? Will they track down Dr Manhattan or whoever is responsible for the Flashpoint event now we're told it wasn't Barry Allen's fault after all?  Whose apartment has Wally broken into... I could make a case for Dick or Roy (penciller Brett Booth has fun with the packing boxes)? And will Wally ever mention his kids?
Seeing Wally's new costume on the page, I'm not keen. The open-top mask worked in his Kid Flash days because there was colour contrast, but here it's red-mask-meets-ginger-hair, you may as well cover the hair up. And the lines are more New 52 than DC Rebirth, with the chest harness effect particularly puzzling. His second Kid Flash costume is his classic, unique look and that would still work just fine. If we need a wee change to denote 'adult', just cover the hair, I promise not to confuse him with Professor Zoom. 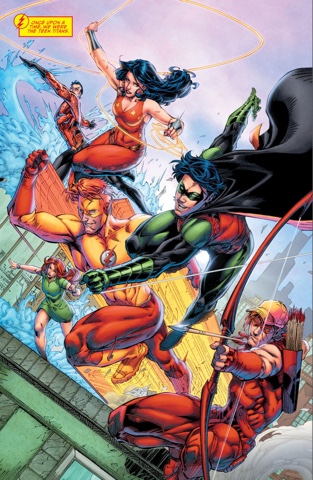 A bum-tactic encounter between Donna and Wally apart, the work of Booth, inker Norm Rapmund and colourist Andrew Dalhouse is easy on the eye, with the opening flashback sequence my favourite (it helps that Wally is in that great outfit and Donna isn't thrusting a ruddy great sword at anyone).
Their cover is a dynamic tease as to what's inside, and Mike Choi's alternate is just gorgeous. 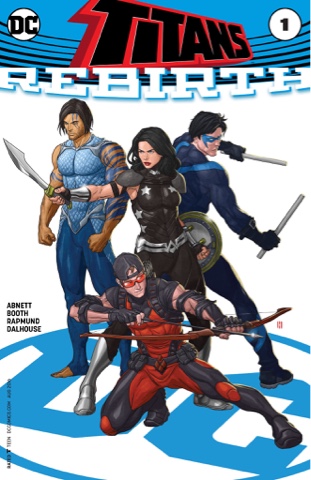 These are my Titans, so there's no way I was going to miss this issue, but if you do, I think you'd be fine to just hop on with the new Titans series.
Andrew Dalhouse Brett Booth Dan Abnett DC Rebirth Mike Choi Norm Rapmund Titans Rebirth #1 review