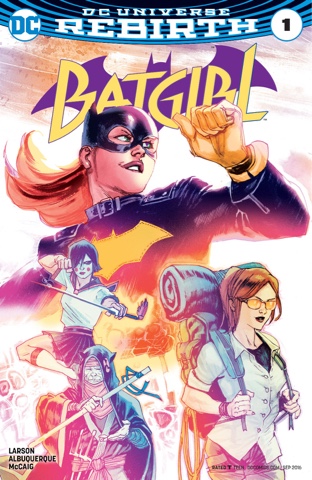 Barbara Gordon has had a heck of a time of late, what with supervillain vendettas, setting up a new energy company and trying to find time for romance. Given an opportunity to catch a breath, and with money no problem, most of us would grab our other half and take off on a nice holiday. Not Babs. Yes, It's bye bye Burnside as Barbara Gordon journeys to Japan, but she's on her ownio, having broken up with goodlooking, smart, rich and extremely nice Luke Fox because... comics.
Ah well, she's got a new young man to hang out with. An old new young man. 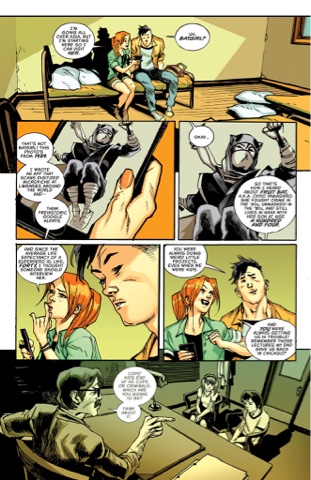 Where would superheroes be without long-lost friends we've never heard of? Still, Babs gets a familiar face to make Japan seem less strange and Kai provides a bit of a mystery in the good boy/bad boy department. He seems so obviously set up as a bad lad that I'm betting he's an Interpol agent or somesuch.
One of Babs' reasons for being in Japan is to check out a superhero forbear, the wonderfully named Fruit Bat. Suffice to say, she turns up and is adorable. Less pleasing to Babs is this gal. 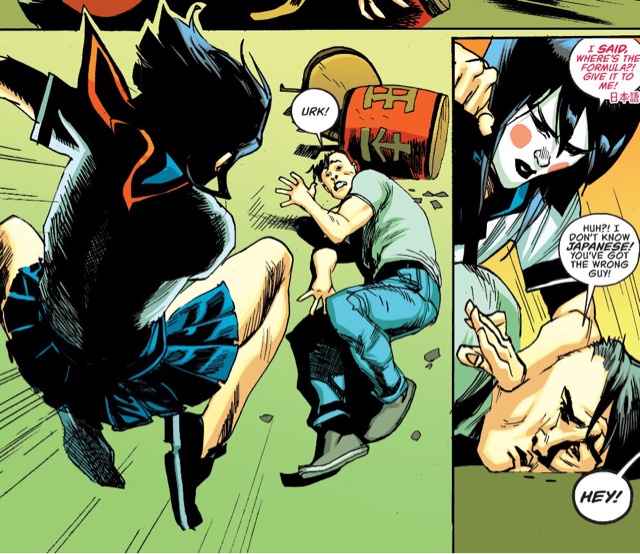 We don't get her name, but I suspect she's more hero than villain and a future friend of Babs...
... why am I second guessing when there's so much to enjoy as Hope Larson becomes the new Batgirl writer? Babs is incredibly likeable - smart, funny, brave as heck. Kai(incidence) is the most adorable big lug since She-Hulk's lovelorn Pug (and if Kai's not worked out Babs is Batgirl, he's achieving a level of dumb never previously measured). Fruit Bat is one feisty grandma, while 'Sailor Clown' has some serious moves.
And the art - Rafael Albuquerque's linework is ridiculously vibrant. Batgirl is the proverbial pocket rocket, all grace and confidence. For most of the book, though, Babs is in civvies, just hanging out with Kai, and the pages look wonderful... the body language, the emotions, they had me right there with the characters (never has a line for the bathroom looked so good). 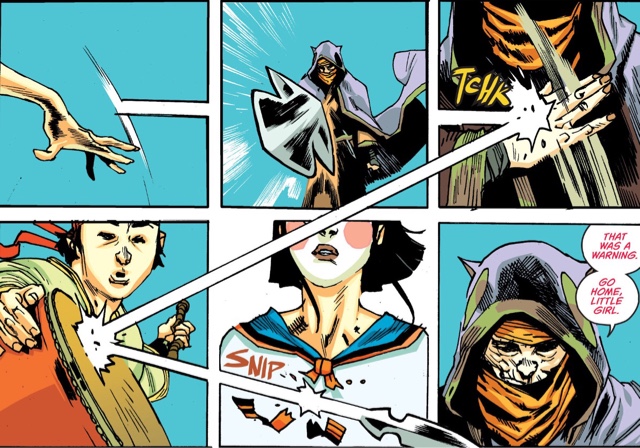 The highlight of an issue without a single dud image is the big fight involving Babs, Sailor Clown, Fruit Bat and Kai - the dynamism is one long teachable moment for young artists.
When the new direction for Batgirl was announced - our heroine goes east to find herself - I was pretty unenthusiastic; in superhero comics East Asia means ninjas and mystical masters and Black Canary happy to be beaten up with bamboo sticks. I've had a bit too much of that over the years. But this comic? It's something else ... OK, there's talk of Babs finding a teacher but one issue in and I have faith Larsen and Aluquerque aren't taking us to the Hidden City of Cliche.
Quibble, quibble, must find quibble. Albuquerque might consider a background artist, he - or perhaps colourist Dave McCaig - relies on a dot pattern backdrop rather a lot. Then again, I like dots... (see what I did there?). McCaig, always an asset, does a lovely job giving this book its own feel via his application of unusual tones - the yellows and oranges as Babs arrives in Japan, for example. 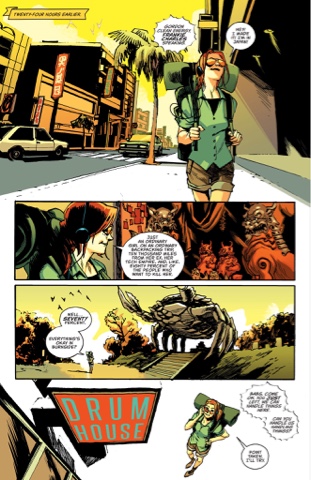 And letterer Deron Bennett goes the extra mile with Japanese characters or words (I am not proud of my ignorance) at the corner of translated word balloons. I guessed it was telling us we were getting a translation and a happy online device informs me that's pretty much the case. It's a small thing, but an example of the thought and care that's gone into this relaunch from the editorial stable - or maybe, dojo - of Mark Doyle and Rebecca Taylor. 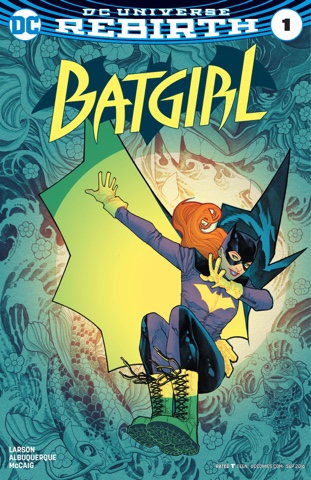 Add in two wonderful covers, one by Albuquerque, t'other from. Francis Manupul, and you have possibly the best DC comic this week. It's funny, I started out not wanting to read about Babs in Japan; now I'm up for a whole world tour.
Batgirl #1 review Dave McCaig DC Rebirth Deron Bennett Francis Manapul Hope Larson. Rafael Albuquerque Mark Doyle Rebecca Taylor