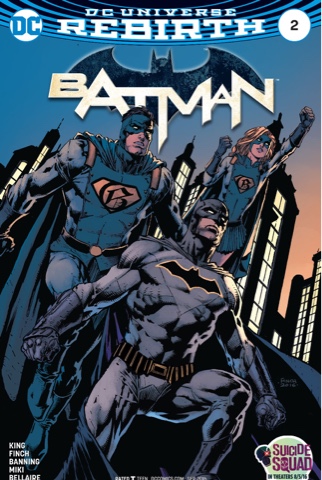 New heroes on the block Gotham and Gotham Girl are chasing down Solomon Grundy, but not doing very well. 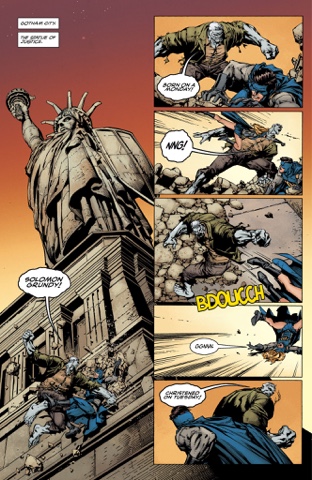 It takes Batman to stop the rampaging swamp monster. Gotham asks Batman to help them become better heroes. They get a chance later when a man who claims to have freed Grundy to go crazy in Gotham kills himself before Commissioner Gordon - can they help solve the mystery?
Elsewhere, Amanda Waller and General Sam Lane are overseeing Professor Hugo Strange's attempts to make a man named Roger their agent in some weird scheme to 'save' Gotham.
I enjoyed this second issue by Tom King and David Finch more on second reading. First time out, I was distracted by questions: what was the conversation between Batman, Gotham Girl and Gotham after the newcomers saved the Caped Crusader's life at the end of last issue? Why is Batman suddenly so morbid, worrying about who will carry on the good fight after he's gone, when he has around 200 sidekicks? Are we not supposed to realise Roger is REDACTED? Will we ever find out what Duke's role is? 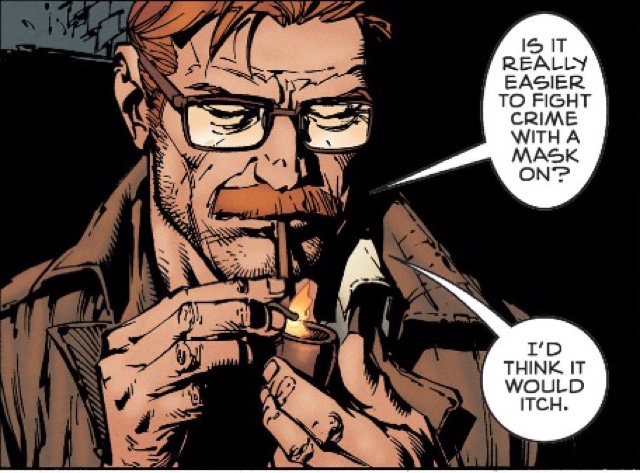 Has Gordon's time as Batman been spirited away?

And does Bruce Wayne not do the best tango? Who needs a Batusi?
Rereading the issue, though, with changed expectations, I just flat-out enjoyed it.
King keeps Batman's cards close to his chest by eschewing any kind of internal monologue, we can only judge him by his words and actions. Batman is, though, clear that he doesn't trust Gotham and Gotham Girl (and how sexist is that pairing of names, even Mary Marvel eventually became a co-Captain Marvel - it's probably a clue that they're from the Forties or something). A few years ago that would've meant Batman doing the obnoxious 'get out of MY town' routine, but here he gives them the benefit of the doubt. Which may actually be a case of 'keep your possible enemies close' - heck, these newcomers may be White Martians or Durlans or Mr Mxyzptlyk... Or perhaps Bat-Mite trying to help, as ever.

They do look awfully sincere as pencilled by David Finch and inked by Matt Banning/Danny Miki, which is a big alarm bell. Too-good-to-be-true heroes tend to turn out to be bad guys (see every second Silver Age Superman Family story) but perhaps King is playing with our expectations and will have them be genuine heroes, and send them to some other Gotham (there's one in England that could do with someone to guard a pond).
Finch will forever bear a million demerits for being involved with the execrable Avengers Disassembled storyline but I really don't get the general dislike among online commentators for his art. It's not the most distinctive stylistically, but it's very solid superhero work and can be, as it was last issue, very good indeed. Here he gives us a nice action sequence with Grundy (has Gotham previously been seen to have a version of the Statue of Liberty?), a terrific Alfred scene, Dancing Bruce, telling close-ups... it's good-looking comics storytelling. And how refreshing that he's drawing Gotham Girl as a slim young woman, not your typical zoftig sexpot.  I don't know how the inking assignment breaks down, other than that Miki handled the dance scene, but there's a pleasantly scratchy finish throughout.
Jordie Bellaire gets a lot of kudos and deserves it as one of the most thoughtful colourists in the industry. With Batman, she's using a lot of earth tones, grounding the fantasy. John Workman has been lettering (and drawing) comics since at least the Seventies and his characterful fonts and trademark round balloons are always welcome. 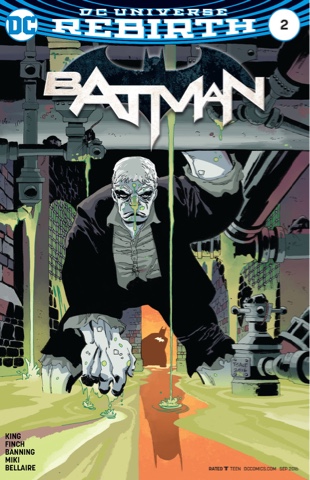 I like Finch and Bellaire's cover a lot. I love Tim Sale's Solomon Grundy variant. DC are spoiling us.
Last issue wasn't as engaging as I'd like but this one is more my speed, with a good mix of action and mystery. And a big dollop of Grade-A Alfred. 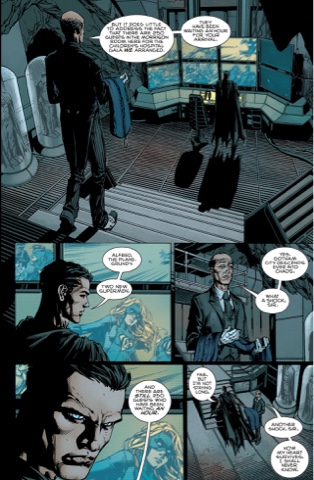