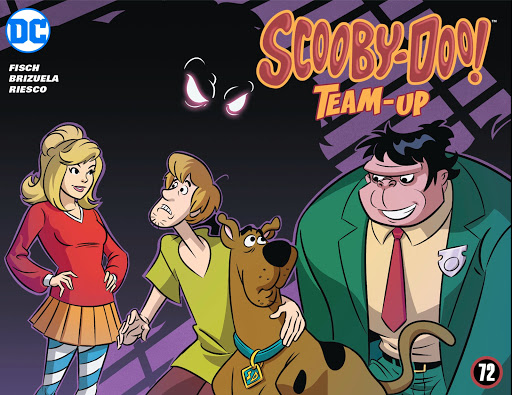 Like, it’s back to the Sixties for the latest Scooby-Doo Team-Up, as Mystery Incorporated makes the scene when a monster is spotted at a telethon. But they’re not the only ones to show up. 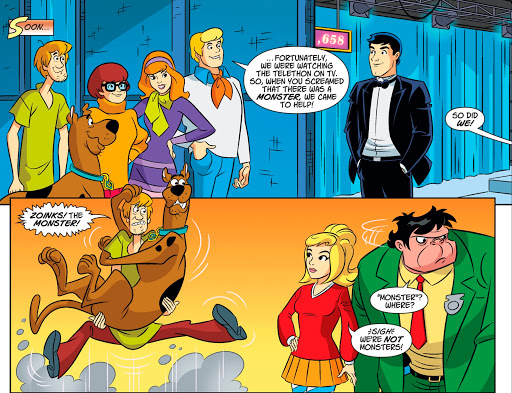 And in the wake of Angel and the Ape, who should arrive on set but DC Comics’ most unimpressive super-group, the Inferior Five. 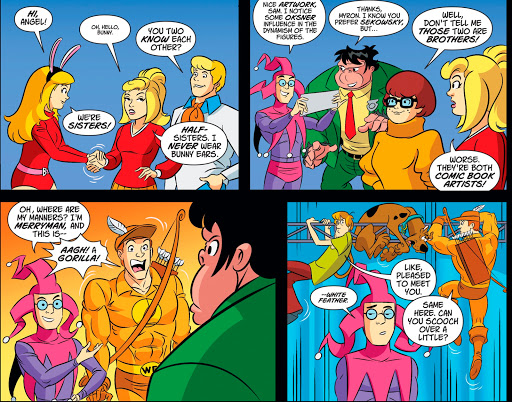 So yes, Angel and the Ape are the cover-featured guests, but they’re not the only characters from DC’s Silver Age funnybooks on hand. And that’s not a bad thing because as well as finding a monster - the cover will give his identity away to longtime comic fans - there are telethon robbers to be handled.

This issue also includes The Maniaks and the real-life comedian who a comic book for many a year...

... OK, it’s Rob Pope, not Bob Hope but, you know, rights do tend to revert after several decades. The main thing is that once more writer Sholly Fisch digs deep into DC history for the perfect characters to have fun with Scooby and friends. Of course Shaggy and the White Feather will get along! And having read the Hong Kong Book of Kung-Fu, Daphne can fight right alongside judo expert Angel.

As well as the comedy characters, we get such verbal Easter Eggs as The Flips and Lando, Man of Magic... top marks to anyone who recognises those names without resorting to Google.

I doubt you need familiarity with DC’s daffier side to enjoy this issue, but if you are of a certain age, this is a massive treat.