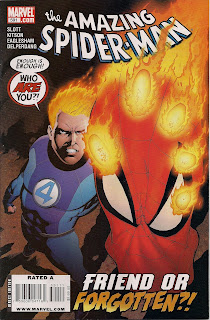 There's been a lot of hype about this issue as the one in which we learn how it is that the world forgot Spidey's secret identity after Civil War. Why it's not simply considered to have been waved away along with the marriage of Peter and Mary Jane by Mephisto, Lord of Convenient Plot Devices, I've no idea; yes, that was a horrible device, but you may as well let it work for you.

Given this, I was expecting something really clever from Dan Slott - he's that kind of writer. What I got was no explanation, just the revelation that some kind of 'psychic blindspot' is at work. It seems that if anyone finds evidence that Peter Parker is Spider-Man, their mind won't let them accept it. O-kayyyyy . . . that's the best explanation since, ooh, Superman learned that he was subconsciously using super-hypnosis to stop people noticing he was Clark Kent - and it even worked when he was reading the news on telly. Funnily enough, DC never mentioned that story again.

I shall now allow a typing blindspot to help me forget this latest daftness and instead salute the rest of the story, which was terrific fun. While Spidey and the FF are ending a war in another dimension, time is passing faster back on Marvel Earth. This allows a series of wonderful vignettes as we see the supporting cast's stories move forward: Frontline reporter Norah and the rarely seen Randy Robertson get together; Aunt May starts dating J Jonah Jameson's charmpot dad; Carlie and Harry get closer as she helps him recover from an alcohol binge; JJJ tries to woo estranged wife Marla; and Flash Thompson's post-amputation rehab continues. In the Sixties Spider-Man grew great partly on the strength of the soapy supporting cast and it's heartening to see how editor Stephen Wacker and the writers recognise this. Once more I'm buying Spidey as much to see Betty Brant and Joe Robertson as I am for Peter, and I love it.

By the time Peter gets back from the Macroverse two months have passed and he gets the shock of his life as the new mayor of New York is revealed - J Jonah Jameson! Bad enough Norman Osborn is running the defences of the US, but JJJ biting into the Big Apple? That should make for some fun stories in the months ahead.

Barry Kitson provided solid, flashy art once more, assisted by new Marvel exclusive penciller Dale Eaglesham. This is the first Marvel work I've seen from the latter and it's attractive, but he needs to check the model sheets - Harry's too handsome and buff, Norah is more blandly blonde than previously. Inker Jesse Delperdang smooths the transition between the two pencillers.

So, a smarter than average, good-looking Marvel comic, memorable for the rapid acceleration of subplots and an unnecessary continuity patch.

Before I go, though, can comic bloggers win No Prizes? Cos I did wonder why the FF and Spidey didn't simply use Dr Doom's time machine to reclaim the lost two months. That could have made for some fun moments as Peter tried to prevent JJJ's accession, and his presence disrupted the suddenly smooth love lives of all around him. So, why not? I reckon it's because having found that New York survived just fine without them, Reed and co didn't want to risk their presence during the missing two months messing things up.