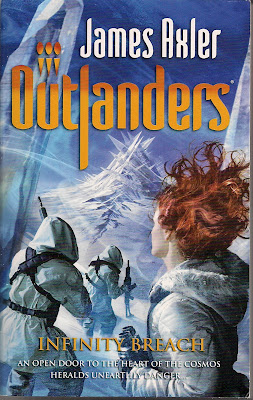 I don't normally review science fiction books, but Outlanders: Infinity Breach is written by friend of the blog Rik Hoskin (I hope you saw the review of his rather neat story in the recent Superman 80pp Giant) and there's certainly a crossover with superhero comics in terms of themes and sensibility. For one thing, Infinity Breach is full of larger-than-life characters - sultry spies, godlike geniuses, feral men with super-senses - plugged into an epic storyline. For another, there's a layer of metafiction that should chime with fans of Grant Morrison, Mark Millar and co.
Infinity Breach is the latest in a series centred on a post-apocalyptic, 23rd-century Earth as three very different personalities, Kane, Brigid and Grant, struggle to survive as outcasts. This time they're trying to prevent an already embattled mankind being wiped out by a higher power in a storyline turning on the exploits of 20th-century science superman Abraham Flag, and alluring rival Demy Octavo. The book offers a knife with the power of the gods, a cosmic rift, soaring heroism and plunging evil ... pretty much everything that you could wish for in a mainstream SF romp.
With the occasional chapter set in the 1930s, Hoskin - writing under Gold Eagle Books house pen name James Axler - goes all-out with the pulp pastiche, leading to such impressively purple prose as: 'Octavo's skin was tanned to a wonderful bronze shade from hours spent reclining on the beautiful, golden beaches of the Mediterranean, and she had carefully painted her lips a luscious, rich color known as falu red'. There's plenty of the traditional incessant repetition of character traits, too. For example, on consecutive pages we're reminded that we're reading about 'the glamorous Italian secret agent' and 'the beautiful, dark-haired Italian agent'.
It can be a little wearing for the 21st-century reader, but approach these sections in the spirit in which they're intended, and you'll likely find the homage a hoot.  I loved such gems as 'the powerful form of the mighty man of adventure' and 'appointment with mystery'.
Back/forward in the present day of the series, the adjective count goes down as the legacy of Flag's adventure seeps into the lives of the three central characters. Can they prevent terrifying angelic beings from judging Man impure and eradicating us?
As good-natured potboilers go, this book entertains nicely; what's more, it shows a pleasing ambition that should ensure that if you enjoy this, you'll want to check out the series back catalogue. And with online ordering and handy bookshops, you won't even need to travel in time.
Outlanders: Infinity Breach review James Axler Rik Hoskin Gold Eagle Books