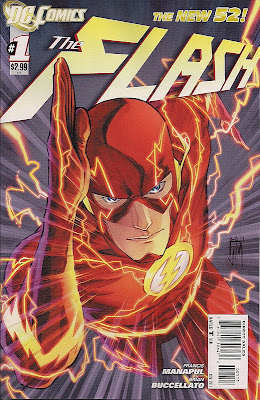 Police scientists Barry Allen and Patty Spivot are on a date at a tech symposium when a masked gang bursts in and gasses the guests. Too fast to be affected, Barry changes into the Flash to battle the baddies. Most get away but he manages to grab one and throw him safely into a building as they plunge, having failed to reach the getaway helicopter.

Following an undignified landing, the Flash meets journalist Iris West, before rushing off to hand research scientist Darwin Elias the veeblefetzer the gang took - a portable genome re-coder (free delivery with Amazon Prime). Iris catches up with Barry and harries him to give her the story of why the crook Flash saved is now dead. Barry is more interested in the identity of the deceased - Manuel, a college friend of his with whom he'd lost touch.

Working on the case later that night, Barry is astonished when an intruder accosts him - it's an alive and well Manuel. He's being pursued, and he persuades Barry to follow him out of the window and into the park. Along the way Barry 'trips' and falls into a river, allowing him to become the Flash before catching up with Manuel, who's been run down by hordes of other men ... all of them Manuel.

This book stars a Barry Allen unlike any seen in DC Comics in decades. He's fun - smiling, laid-back, the happy hero I remember from my earliest days of reading comics. I'm still not happy DC is promoting Barry (the Flash I grew up with) at the expense of his successor, Wally West (the Flash who grew up with me). Or that his marriage to Iris West has been erased. But a likeable Barry takes away some of the sting, and I can't say I'll miss the time travelling, body-hopping baggage accrued over the years by Barry and Iris.

And it is nice to see Patty Spivot, one of my old favourite supporting characters, get a featured role here. She's no longer simply Barry's lab assistant, she's his equal, and well able to hold her own against Central City Police Department's male cops.

Iris suffers by comparison, as the most annoying reporter you ever did see - Central City is obviously a competitive news patch. I expect she'll settle down, given time.

Handling the writing duties for the first time, illustrator Francis Manapul and colourist Brian Buccellato impress with a nicely worked plot and zippy dialogue (I suspect they speak it out loud to one another). I've mentioned the likeable characters already; then there's a storyline laced with enjoyable mad science, and fresh uses of Flash's super-speed. Artistically, there are some simply splendid sequences, including a title spread that bursts with energy and dynamism; the fall sequence, in which composition and colour work together to highlight the action; and a page (apparently sponsored by iPad) giving us a bird's eye view of Barry working in his home lab.

The only off-note with the art is Barry's new costume, with its fussy panelling and unnecessary lightning motifs, but that's a design Manapul and Buccellato were handed. Let's hope that over time they sneakily tweak it back to sleekness.