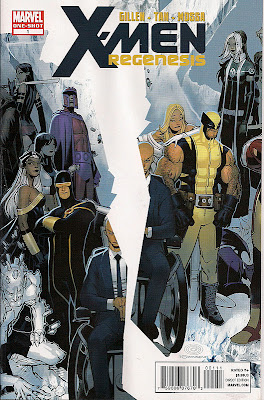 Wolverine is rebuilding Professor Charles Xavier's School for Gifted Youngsters on the East Coast. Cyclops is remaining on Utopia island on the West. Here's where a couple of dozen mutants decide where their future lies.

The awkwardly named X-Men: Regenesis is set just prior to the end of last week's Schism #5, and shows us why the various members of each faction align themselves with a particular leader. For some, it's about personality. For others, it's Xavier's dream. Or flattery. Continuity. Home. A fresh start ... there are any number of reasons, meaning this extra-sized issue - 34pp for $3.99 - isn't the repetitive affair it could be. Instead, writer Kieron Gillen gives us page after page of sharp vignettes, with most of the decisions making sense in terms of the personalities involved. There are some nice surprises regarding who goes where, including which former super-villain looks set to be the school janitor.

The Beast is delighted to get asked to run the school. Dazzler is staying in San Francisco to oversee Cyclops' street teams. The newly 'Juggernauted' Colossus doesn't feel he's safe to be around kids. Storm wants to go one way but is persuaded to swerve. And so on.

It's hard to believe that after the vicious fight they've just had, Cyclops and Wolverine can stand to be around one another long enough to drum up supporters, but go with it and you'll likely enjoy this focus on characters.

The one thing I'm not at all keen on is the framing sequence showing mutants coming together around Wolverine and Cyclops as the two fight once more. We're in the land of Metaphor, it seems - participants are in rags or fur bikinis (even the robotic Danger!) and shaking bones. I think the idea is that the difference of philosophies between the two leaders is so deep, it's bloomin' primal.

Or maybe folks just went to a last-night-together Flintstones-themed shindig. It beats me, answers on a postcard ...

Whatever the reason, the scenes don't sit well with the rest of the issue - in trying to make an argument epic, the metaphor comes across as self-conscious and pretentious.

The artwork's by Billy Tan and it's not at all bad, bar some awkward faces (I'm looking at you, Dazzler, and it hurts). He captures a nice range of emotions. Colourist Andres Mossa ensures the two strands of story receive a different tonal treatment, which is smart, while Rob Steen handles the lettering well.

The cover, by Chris Bachalo and Tim Townsend, features some odd choices, such as a sleepy-looking, frog-faced Emma Frost and tiny heads for Magneto and Wolverine, but overall, I like it.

Based on the character split, I'll be siding with Wolverine and the X-Men, but expect to take a peek at Uncanny X-Men too. Please though, Marvel, no more extended visual metaphors.
Andres Mossa Billy Tan Chris Bachalo Kieron Gillen Rob Steen Tim Townsend X-Men Regenesis #1 review