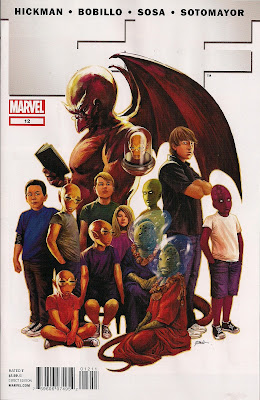 Last week, in Fantastic Four #600, the Future Foundation kids teleported the Baxter Building's upper three levels away in order to escape Annihilus' insectoid incursion. We rejoin them as they phase onto the top of a mountain in Latveria, just as an alternate world Reed Richards, time traveller Nathaniel Richards, super-villain Dr Doom and his adopted son Kristoff waltz around one another.

Coincidence? Unsurprisingly, no - infant genius Valeria Richards arranged the destination at the behest of Grandad Nathaniel, so he can use the FF's mixed bag of prodigies to, er ...

I have very little idea. Writer Jonathan Hickman is playing a very long game involving a gang of parallel Reeds, Nathaniel's connection to the Illuminati-ish version of SHIELD, four hidden civilisations and heaven knows what else. When there's a chart, I'll get back to you.

I do have hope of being able to work things out soon, now FF has split into two books - this one, and mother series the Fantastic Four. With two locations in which to tell his convoluted epic, Hickman can wrap things up much more quickly.

Or allow the various story strands to breathe still further. Maybe add some new ones.

Anyway, as a unit, this instalment is a more-than-pleasant diversion. The kids get some nifty dialogue - I love the contrast between manipulative Val and wannabe hero brother Franklin, while mini-Wizard Bentley has a delicious black streak of humour - and there's definite forward motion in the story, as alt-Reed bids to return home. Oh, and it's amusing to see Nathaniel Richards mess with the other adults' heads, and experience a Doombot with a sense of theatre.

The big revelation this issue is new penciller Juan Bobillo. On She-Hulk, a few years back, he produced delightfully whimsical superhero art. He's recognisably the same guy here, but his work has gone up a notch or two - it's a little more dramatic, as the more serious FF series demands, but it's also brighter, more open and attractive. Thankfully, he draws terrific children - moppet brainiacs, mutant scrappers, otherworldly urchins, all with appropriate expressions and body language. He's not half-bad at adults, either. And landscapes. Castles. Dragon Man. Doombots ... (Click on image to enlarge) 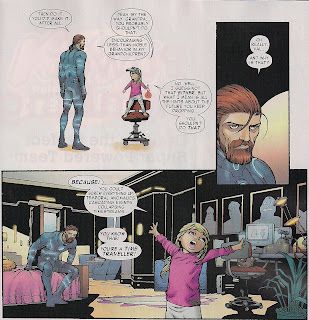 I especially appreciate that unlike lots of artists, he remembers that Franklin and Val aren't the same age - he's about eight, she's just beyond toddler (making her machinations all the creepier).

Credit, too, to longtime inking partner Marcelo Sosa for some splendidly delicate finishes, and colourist Chris Sotomayor, whose only 'sin' is to tint Alex Power's hair mouse rather than blond. Clayton Cowles supplies the commendable lettering. A demerit to whoever laid out the much-appreciated recap page, for misspelling 'Bobillo' (and merely mentioning this guarantees that this review will be full of typos, but you never know, someone at Marvel may actually see this and fix the error).

Previous FF artist Steve Epting provides a cover that's not in keeping with the new artistic approach, but goodness, it is lovely. Sadly, the FF logo remains rubbish, a clever design but bereft of any impact on the shelf.

Marvel could easily have labelled this as a new #1, given the slight tweak of emphasis, so good on them for not doing so, likely in recognition of the fact that most first-time readers wouldn't find this the most convenient jumping-on point. But for fans of Franklin, Val and their mates, students of Hickman's challenging tapestry of the Marvel Universe and devotees of wonderfully characterful artwork, this is the place to be.
Chris Sotomayor Clayton Cowles Dr Doom Dragon Man FF #12 review Jonathan Hickman Juan Bobillo Kristoff Marcelo Sosa Nathaniel Richards