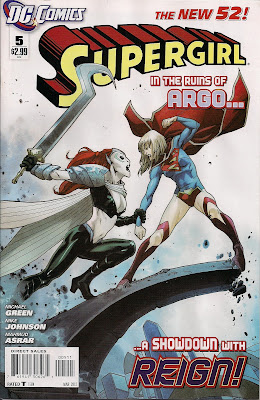 Hoping to learn what happened to her world, Kara follows the sunstone's lead through hyperspace to a blue orb, where she finds her home, Argo City. But it's deserted, in ruins. The sunstone plays a message from her father, Zor-El, telling Kara how he planned to save the city from Krypton's destruction, but unsure he'd be successful, placed her in a protective pod and sent her offworld. His hope was that Kara would one day be reunited with him and her mother ...

... tragically, it will never happen. Zor-El is distracted by something off camera, something that approaches and slaughters him. Kara is filled with grief and anger - in the space of minutes she's learned that as Superman claimed, Krypton is dead; Argo City survived awhile, but it's now dead; her father, too, is dead.

She begins hitting out at things around her, a terrifying engine of destruction. It's then that perhaps the only other being on Argo makes herself known - Reign, another woman of immense power, with an offer to make Kara. Supergirl, though, isn't listening, instead lashing out against the newcomer even as distance from Earth's yellow sun dampens her powers some. She can't beat Reign, and has to listen as she explains that she's a sentient living weapon linked to Zor-El, a Worldkiller.

Now Reign wants Kara to join her as she conquers Earth, convinced there's a secret on 'that little ocean planet' that makes it a haven for Kryptonians. Realising Kara won't help her, she instead leaves Supergirl to die as Argo finally fades.

This is my favourite issue of Supergirl yet, a fast-moving balance of action and explanation. While I could live without Supergirl's first reaction to the arrival of a  stranger being to beat them up (see also Supergirl #2), I accept that she's under stress and immature; just let this be the last time for awhile. I do like that we get some illumination as regards Supergirl's background - I was afraid the mysteries would drag on forever. And her mix of wonderment and fear as she realises that she's flying through space on a single breath makes sense. I'm less keen on a second appearance for her ability to release yellow sun energy from within ... I prefer my Kryptonians to have the standard power set.

New character Reign (originally planned to be a fresh take on old character Maxima) has potential as an ongoing antagonist, given her strength and ties to Supergirl's heritage. And she has a creepy look as drawn by Mahmud Asrar, with heavy brow, perma-sneer and something of the White Martians about her.

Asrar's work is pleasing throughout, though Argo might look a tad more fantastic. His new take on Zor-El works and the fight with Reign is nicely varied in composition. The contribution of Dave McCaig deserves extra praise, now Asrar is working without an inker. They pair kick off the issue well with a well-balanced, dramatic cover.

With luck, the origin arc will be over soon. Good as it is, I'm keen to see what Kara's status quo will be in terms of her new life on Earth. Meanwhile, I'm enjoying this new take on the Supergirl legend.
Mahmud Asrar Michael Green Mike Johnson Supergirl #5 review