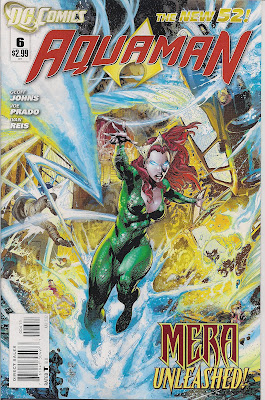 Mera goes shopping for dog food, breaks the arm of a sex pest, nearly kills a murderer, is confused by humans and makes a friend. She thinks back to how she came to Earth from a watery dimension intending to kill Aquaman, but changed her mind on learning that he's a good guy.
Yes, it's a busy day for Mrs Aquaman, but luckily she has plenty of room - Arthur is absent until the final page. So the creative crew can show us how awfully 'badass' Mera is, taking no nonsense from anybody. Appropriately named shop owner Randy winds up in an ambulance, appropriately named killed Ryan Slayter winds up half dead. There's no denying Mera does good in teaching the local caveman a lesson and taking a killer off the streets, but she's more brutal than a hero should be.
I enjoy seeing characters use their powers in imaginative new ways and Mera sucking the moisture from Slayter's body, to simulate days without water, certainly qualifies as that. And it's fun to see her control the liquid from water coolers.
But she's so very angry. For 50 years' worth of comic stories, Mera was formidable with her hard water powers - think undersea Green Lantern - and knack for leadership. She didn't lose her temper easily, though tragedy caused bouts of madness. Then Johns 'revealed' that she originally came to Earth from a lost Atlantean colony to murder Aquaman. Happily, she married Aquaman rather than murdered him. But don't think love tamed her entirely ... you don't make an enemy of Mera.
I'd love DC's New 52 to have taken the opportunity to wipe away this retcon. But here it is. Mera remains a woman whose first instincts are to lash out.
Johns bids to make Mera's responses seem justified by surrounding her with provocation; it's not just sex pests and killers, it's members of the public who, rather than listen to her, laugh at 'Aquawoman'. I've written previously about how silly I find the idea that the public considers Aquaman any less a hero than the rest of the Justice League, so won't go into it again here. Let's just say I'm disappointed to see the conceit extended to Mera.
While I'm not a fan of the characterisation, Johns does a good job of writing his Mera - a haughty woman who keeps her vulnerability to her private moments. There's hope that in time she'll conquer the instincts formed by her background and be the hero Arthur is. Her making a friend can only help, though it's a shame Jennifer - previous focus of the frankly unbelievable Randy's harassing ways - is set up as the One Good Person in Town.
For now, Mera is the very model of a modern superheroine - so sexy you can't help looking, but stare for too long and she'll take your head off. I can imagine the fan clubs forming ...
The artwork is easy on the eye. As laid out by Ivan Reis, drawn by Joe Prado and coloured by Rod (gorgeous skies) Reis, Mera is bewitching and her displays of power fascinating. Her confrontation with Slayter is especially well-rendered, her power building along with her rage. The flashbacks to Mera's past are presented with due intensity, the backgrounds are numerous and convincing and 'Team Aquaman' depicts a very cute doggy. The only niggle I have is that, facially, Mera and Jennifer are a little too alike.
I can see this being a very popular issue. It panders to many readers' preference for kickass protagonists. It reads decently and looks terrific. But while heroes who struggle against their worst instincts can be interesting, Mera never needed to join that band. Give me noble queen over reformed water witch any time.
Aquaman #6 review DC New 52 Geoff Johns Ivan Reis Joe Prado Mera Rod Reis