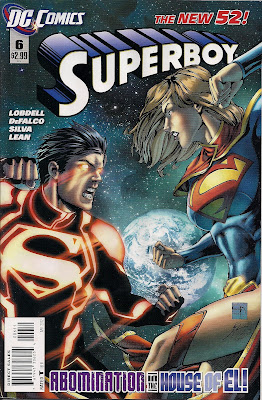 This issue picks up where Teen Titans #5 left off ... hang on, that's not quite right. This issue begins a few pages before the end of Teen Titans #5, wasting its first five pages on the exact same moments. I might not care so much were DC not telling us to read that issue (which was a bit rubbish) in an editor's note on page 1.

So, Superboy feels bad about beating up the Titans, but headbutts last girl standing Solstice anyway, and then quits shady organisation NOWHERE. Supergirl shows up, having spotted her family crest on Superboy's chest from miles away (that's some awfully specific super-vision she has) and wondered if they have any connection beyond bad fashion. Her touch fills Superboy's mind with images of Krypton dying (it seems telekinesis isn't his only mental power) and he learns of a war between clones and Kryptonians. Along the way, Superboy absorbs knowledge of Kryptonese, meaning he can understand Supergirl, and tell her that he's a clone.

Regular readers of Supergirl will have guessed what's coming next. KWOOM, she bashes Superboy into the upper atmosphere, while crying out 'KON-EL'. Has she just named our moody hero, via some butchering of the word 'clone'? Whatever the case, Supergirl is at it again, thumping first and asking questions later (see also Superman, Reign ...). Cue fight, one that only ends when a helicopter appears and begins strafing them, and she instinctively steps in front of Superboy, believing he needs protecting. He uses his TK to send the helicopter safely away, and Supergirl grabs the opportunity to get away from Superboy, intending to find cousin Kal-El and see what he knows about this ... brrr ... clone.

Superboy then returns to his usual story arc, heading for NOWHERE headquarters to tell them what's what, where he finds Rose Wilson waiting for him, mad as heck. 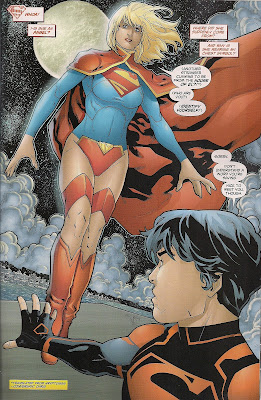 The dialogue and narration from Tom DeFalco (in what I believe marks his return to DC after 30 years with Marvel) is note perfect.

The colouring from Tanya and Richard Horie is bold, the letters from Carlos M Mangual attractive. Shane Davis, Jonathan Glapion and Barbara Celardo provide a decent cover (though it's not as attractive as the interior artists' work).

No, what's wrong with this issue is Scott Lobdell's plot. It's more supposed superheroes bashing one another for no good reason, which seems to be all that Superboy, Supergirl and the Teen Titans ever do (I know it's not, but the impression is building). Everyone's so angry, and misunderstood. We even have Superboy and Supergirl serparately whining in this issue that everyone is always hitting them for no reason. Super-Pot meet Super-Kettle.

It's all gotten really tired - can't these kids just have a conversation before fighting? Just once.

And next issue, it's Superboy vs Rose. I'm ready for a change in direction, for Superboy to stop being such an oaf and to start being allowed to hit proper criminals rather than every kid in the DC Universe.

There is a tiny bit of plot progression, as Superboy learns about Krypton, and Supergirl tells him that clones tend to turn into nutso killing machines, but it's a shame that the information couldn't come out as the two teamed up against an actual villain, rather than one another.