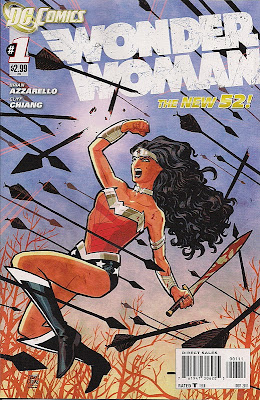 Gods walk the Earth. In Singapore, one creates oracles in a bid to discern his father's moves and moods. In Virginia, another slaughters horses to produce murderous centaurs. Nearby, a third defends the mortal target of the transformed beasts.

And in London, Diana sleeps. But not for long, as a mystical object transports Zola, the centaurs' prey, to her side, pulling Diana into the chess game being played by the Olympians. Soon Wonder Woman is facing the wrath of the centaurs, and meeting an old friend.

I could give you chapter and verse but this is one of those books in which the devil is in the detail, and I suspect most people reading this will be buying. Writer Brian Azzarello and artist Cliff Chiang carefully ladle out the information and you're going to have fun discovering who's who, and what's what, for yourself. So in lieu of massive spoilers, let's look at the tone, and the bigger picture.

Azzarello said this was going to be a horror book, and certainly a strong stomach will be needed for a few of the panels here. If you can't abide animal cruelty, the opening pages won't be for you, as the horses are slaughtered on panel. What happens next is similarly grisly, but makes sense for the story, and we were warned.

The real horror, though, arises from the feeling that all the creatures of earth are the gods' playthings, to be transformed, or murdered, as their whims dictate.

When Diana appears in the story, there's an instant injection of brightness. Not in a Pollyanna way, more in the sense that while she's wary, and fierce, it's obvious this is a good woman, a strong woman - a wonder woman. She's going to protect mortals from gods, starting with Zola, whom we learn has had a rather classic encounter with one of their number.

The dialogue is terse, and smart. It makes the characters feel enigmatic, without their seeming irritating. The dramatic scenes pile up, and we see something of what Diana can do. The fight choreography from Chiang is some of the best I've seen in a while, with no doubt about how we get from panel A to panel B, while his reinterpretation of the gods is stunning. And so far as regular folk go, Zola looks to be the spitfire Diana deserves to have at her side.

And Wonder Woman herself? I don't think 'beautiful as Aphrodite' would be overstating.

The story closes with a scene echoing something that happened in last week's Demon Knights, but Chiang's control of time makes it even creepier, while Matthew Wilson's beautiful colours are as effective here as they are throughout. First-class lettering, too, from Jared K Fletcher.

I'm not delighted with the new costume - silver rather than gold, too many double-ws, a tiny emblem - but I can live with it, and it'll likely become more like the iconic look as time goes on.

Gore apart, this is a fine debut, and I can't wait to see where the story goes from here. The book has a feel all of its own among DC's New 52 books, and I love that there's no sense that we'll be bothering with tedious 'Who is Wonder Woman?' issues. She's Diana, princess of the Amazons, defender of mortals, and she's right here.
Brian Azzarello Cliff Chiang Jared K Fletcher Matthew Wilson Wonder Woman #1 review