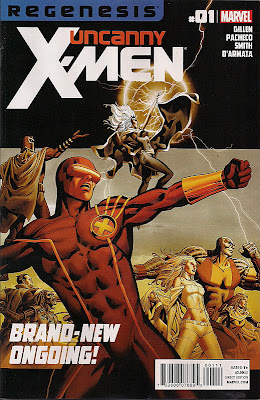 Utopia leader Cyclops gathers his lieutenants and announces his latest notion - the Extinction Team. They'll protect mutants and humans alike, and their world-saving displays of power will hopefully deter humans from victimising mutants. His thinking is that as non-mutants fear the X-Men without any show of force against them, they may as well amp up the forcefulness and make the ordinaries so afraid they'll back off.

While telling non-mutants that, really, we just want to live side by side, embracing peace.

It's rather the mixed message, and the team membership isn't exactly one to soothe the nerves: as well as Cyclops, Storm and Hope Summers, there's Magneto, Emma Frost, Namor, Magik, Danger and a Juggernauted-Colossus. 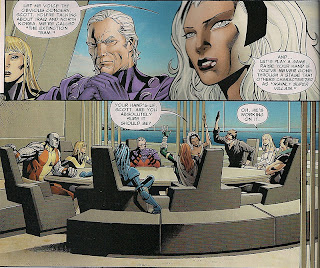 A problem finally arises - the Dreaming Celestial, the unmoving, giant, ancient god which looms over Golden Gate Park, is giving off strange energy readings. Cyclops and co rush to the scene and find that behind it all is old X-Man villain Mr Sinister, but before they can learn his plans he takes off in the being's head, reshaped to resemble his own.

This leaves the X-Men to fight battle-bots launched from the Celestial's body. The likes of Magneto and Colossus get to show off how truly powerful they are, which should make Cyclops happy ... but one member is maimed. Mr Sinister, meanwhile, demonstrates that the X-Men aren't the only ones who can create their own sovereign territory.

And that's the bare bones of the first #1 issue Uncanny X-Men has ever had (the previous version didn't gain the adjective until well after its hundredth issue). The meat includes sparkling dialogue from writer Kieron Gillen and - Betsy Braddock's bottom apart - irreproachable art from penciller Carlos Pacheco and inker Cam Smith. Gillen obviously knows what he's doing and Pacheco and Smith, with their epic staging, will make it look great. The sharp opening, which goes from whimsy to horror in seconds, is followed by a richly characterised discussion among the senior X-Men, and that's succeeded by plenty of action leading to an arresting final image - it's exemplary work all round.

But I don't think this is the comic for me - there are so many villains as members that it may as well be called the Brotherhood of Evil Mutants. Cyclops compromised by decisions he's taken. Colossus struggling to fight off the Juggernaut's demonic tendencies. Storm hanging around only to temper a team she sees as liable to go all-out evil at any moment. Hope working some hoodoo on the emerging mutants ... the only member regularly beinging humour to the team is Emma Frost, and she can get a tad one-note.

As for the villainous Mr Sinister, I like his new look, but he's just so dreadfully panto. I can never read a line of his dialogue without imagining a green light on him and kiddies booing and hissing. Hopefully he's just around for the first storyline.

Back-up features include a cute 'who's who on Utopia' and Cyclops' message to humanity, which seems not wholly unreasonable until you get to the FAQs at the bottom. Scott Summers truly is the heir to Magneto.

I can see the more hardcore X-Men fans loving this book. It's very well crafted, includes fan favourite characters and continues the 'nobody like us, everybody hates us, think we'll go and eat worms' storyline of the last 20 years or so. I'll certainly give it an issue or two more, see where it goes. But I suspect I'll be packing my bags and moving the Jean Grey School for Higher Learning full-time. At least until the X-Men become a group of heroes again.
Cam Smith Carlos Pacheco Kieron Gillen Mr Sinister Regenesis Uncanny X-Men #1 review