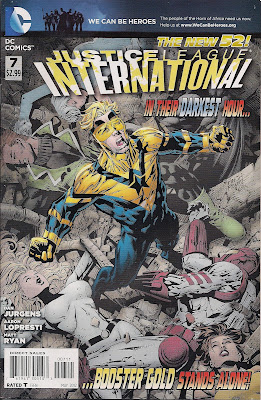 The first word I ever learnt from comics was 'ironic'. Reading handed-down Silver Age Superman family books you could barely get through an issue without a 'How ironic (choke)'. That nutty phrase stuck with me to the extent that it almost became the name of this blog (on Earth 2, it is the name of this blog).

So .... how ironic (choke) that after defeating a being able to destroy entire planets, the JLI is brought down by an earthbound  bomb. Members live, members die, all due to the actions of someone who doesn't want the new team to carry on. Detonated as the JLI were lauded by the UN last issue, the bomb hits heroes and civilians alike, meaning the JLI members able to fight on this month spend their time rescuing victims. The squabbles of previous issues are benched as Leaguers rally to save as many people as possible.

This means that the new villain behind the explosion, Lightweaver, is able to stay off JLI leader Booster Gold's radar until he chooses to make himself known. His sinister solid light creations, on the other hand, attack the heroes throughout the issue.

Also on the attack is UN Security Chief Chairwoman Bao, who steps forward, mid-battle, to tell the JLI - who have just saved the planet from doom - that the UN is withdrawing its backing because they attract trouble. Being adults with bigger things to worry about, like keeping this thoroughly stupid woman alive, they ignore her idiotic demand to cease and desist superheroing, on threat of a lawsuit.

Like they should care when one member is in a hospital bed, two are on operating tables and a third is on a slab. Who's who? I'll let you discover that for yourself.

Well done to writer Dan Jurgens for an issue that's come out of nowhere and slapped me around the chops. A lack of spoilers meant the deaths in this issue - it's not just a JLI member who pays a price for idealism - genuinely surprised and saddened me. And such reactions mean I'll keep following this book rather than its solicitations. Watch and learn,  marketing men.

Jurgens' script is solidly serious without being depressing. Booster narrates and while his personality is intact, there's no flightiness here; a colleague has been lost, and friends hurt, on his watch. He's going to go after the people behind the atrocity, just as soon as he's sure as many innocents as possible have been saved. And it's not just Booster who benefits from Jurgens' deft touch, all the heroes aquit themselves well, and all have their own voice. The only person in the book I don't believe in is Chairwoman Bao - she's too big an idiot even for a comic book politician. 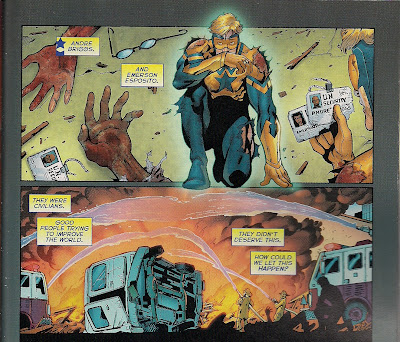 Drawing the script, penciller Aaron Lopresti and inker Matt Ryan provide solid, good-looking superheroics, all coloured with pizzazz by Hi-Fi (click on image to enlarge). I especially like their subtle body language. My only quibble is that while the energy creatures created by Lightweaver are referred to as a threat on the first few pages, they're barely visible. At the very least there should be an establishing shot - if you manage to spot them before page five (and they are there) you win a prize. Probably.

The art team regains a few points for a cracking depiction of a surprise guest on the final page. It'll be interesting to see how this guy fits in.

On the cover, David Finch, Rich Friend and Peter Steigerwald give us their take on a classic comic book scenario. Works for me.