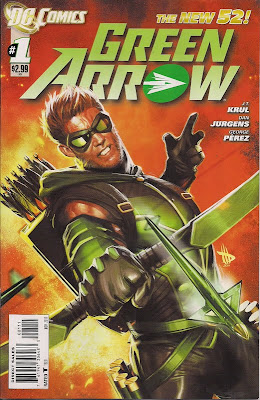 One of the aspects of the New 52 books from DC that I'm appreciating is the extended scope of adventures. In the old days a hero was more likely to visit the dead planet Krypton than, say, Wales. When a country other than the USA did appear, it was usually there only to be blasted out of existence by the villain du jour.

This week, that changed. We've had stories set in Africa (Batwing), Peru (Justice League International) and with Green Arrow #1, France, which has a Meta-Military. Who knew? The hero is there to capture three low-level supervillains, Dynamix, Doppleganger and Supercharge. And nab them he does, using hi-tech (or as we called them in the old days, 'trick') arrows and ... Frisbees? He's throwing something disc-shaped, anyway
- they could simply be plates from the party that the hero and villains have crashed.

GA, AKA billionaire Oliver Queen, also has assistance from his aides, patched through from Seattle - computer genius Naomi (actually, no one says she's a genius, but this is a comic book so of course she's a genius) and weapons designer Jax. Their interraction with Ollie adds an extra level of interest to the fight scene.

Away from the battlefield, Ollie runs Q-Core, sister company to Queen Industries. The former develops technology 'to build a better world', the latter aims to profit from technology in 'virtually every aspect of civilised life'. Overseeing Queen Industries is Emerson, who may be Ollie's big brother, depending on whether Ollie's dialogue refers to George Orwell, or siblings. Whatever the case, they don't get on and Ollie wants to keep his company away from 'the Dark Tower' - Queen Industries is based in a massive Q-shaped skyscraper, likely designed by whoever came up with the similarly ridiculous Lexcorp and Titans Towers in times past.

Speaking of Lexcorp, Emerson gives us some idea of the industrial hierarchy in the new DC Universe - Lexcorp and Waynetech are up there with Queen Industries, along with Holt Industries, which we'll see something of in the new Mr Terrific comic.

This comic, meanwhile, impresses with its use of a young Ollie Queen, likely influenced by the version on Smallville (he even has a basic Chloe stand-in, in Naomi). He's smart, skilled and idealistic without being as self-righteous as the older Oliver featured in DC Comics since the Seventies. Plus, he doesn't kill, which is how I like my heroes. And the new supporting characters show promise, especially Naomi and Jax with their opposing views on how to handle criminals.

The villains this issue seem throwaway - one's claim to fame is menacing Milan Fashion Week (there's that global reach again) - but may grow in stature over time. It's not like we want to see Ollie overwhelmed in his first issue. Next time, maybe.

Writer JT Krul has crafted a decent debut here, presenting Ollie and his world, and hinting at his backstory (I do, though, need urgent clarification on those Frisbees). While the dialogue is serviceable, a bit of sparkle would be nice; hopefully the characters will gain distinctive voices quickly.

Dan Jurgens, as a veteran artist and writer, knows how to tell a story, and his work here is exemplary. The new Green Arrow costume isn't anything special, but neither is it an abomination - it's green and black and segmented all over, very New DC. Inking Jurgens is George Perez, who brings a pleasing scrappy quality to the work; I rather like this artistic teaming, one I remember fondly from Jurgens' shortlived Teen Titans run.

The cover by Dave Wilkins is a winner, if you ignore Ollie's horrendous Abe Lincoln chin foliage - he's unshaven inside, but not quite so tragic. The new logo, sadly, is rubbish - that arrowhead 'O' just isn't enough to pull it out of the realm of 'generic'.

This isn't the most compelling New 52 book I've read this week, but it's a fun diversion, and so long as Krul keeps Ollie likeable, and takes us to fresh corners of the world, I'll likely be sticking around.
Dan Jurgens Dave Wilkins David Baron DC New 52 George Perez Green Arrow #1 review JT Krul Rob Leigh